When people think about actress Pam Grier, many see the sexy, tough-talking, gun-toting badass characters she brought to life in ’70s blaxploitation flicks such as Coffy, Foxy Brown and Sheba, Baby. But few know about her real-life showdowns with sexual abuse and one of the most evil villains of all time—cancer. 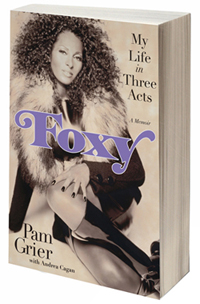 At the time she experienced cancer, Pam Grier felt like it put her in limbo. People she knew were moving on with their lives, but not her. “It was the ’80s and everyone was buying a second and third home and moving into lifestyles that were fruitful,” she says. “I was thinking I would have that. It was time to get married, maybe have children, and it all came to a screeching halt. My life and my journey took another route, but it made me stronger.”

Even though her cousin, Krista, whom Grier considered an adopted sister, died of breast cancer, the news of her own diagnosis of cervical cancer came as a shock. “Other than my sister, there is no history of cancer in my family,” she says. “We think hers was possibly from being a flight attendant because a lot of women became very ill working in those types of environments.”

In her recent memoir, Foxy: My Life in Three Acts, Grier spoke about coming to terms with Krista’s death and fighting for her own health after the diagnosis and related surgeries.

When she was told she had cervical cancer in 1988—the docs said she had 18 months to live—Grier had just completed a new movie, Above the Law (starring Steven Seagal). The film returned Grier to the big screen after a seven-year absence. But cancer cancelled her comeback.

What’s more, after Grier’s first surgery, her doctor found the cancer was more widespread than previously thought so she underwent a second procedure to remove more cancerous tissue.

After this second surgery, her doctor suggested she add Eastern medicine to the prescribed traditional Western drug treatment. She met with Chinese herbalists who provided her with a more balanced treatment, and she also researched various methods of healing.

Around this time, she saw a Bill Moyers documentary that showed a Chinese medical treatment dissolve a malignant tumor on a Chinese woman’s back. It was a revelation to Grier. “I resolved to use the proper positive thinking to investigate Eastern healing methods,” she says.

Grier visited Chinatown and met a variety of people with different economic backgrounds who subscribed to Eastern medicine. “It was all new to me,” she says. “It was fascinating to me that so many people were so much more progressive and open than I had been. I learned a lot along the way.”

What Grier learned was that other cultures’ health theories could also benefit her. She retooled her eating habits and incorporated more organic foods in her diet.

She also started to practice yoga and include other health principles into her everyday routine. “I learned about thermal theory—that if you drink ice-cold water in the morning, it boosts your metabolism,” Grier says. “Simple things like that have awakened and informed my way of eating, and [now I use] moderation to minimize certain foods in the diet we know aren’t healthy.”

Today, the Internet makes valuable information about wellness and eating accessible to many more people, Grier says, but not everyone values it. “A lot of adults stop their education when they leave high school or college, and they don’t continue because they’re too busy working or raising children,” she says, pointing out that it doesn’t have to be that way. “Now children are being exposed to health and wellness advice. It’s great when families can learn about these things together.”

In her book, Grier also emphasizes the role that support from family, friends and even strangers played in her recovery. “There is nothing better than waking up from your procedure,” she recalls, “and seeing friends who you think didn’t care in your room bringing margarita makers and ice and drinking tequila with your mom who’s sitting at the end of your bed—then a movie employer walks in, or Steven Seagal stops by and tells you he heard about what happened.”

Turns out, when Grier was in the hospital, radio broadcasters announced she was having surgery. “People were calling,” she says. “I was wondering how they knew.”

At first disappointed, Grier soon realized that people often stigmatize sickness. “Many people cannot take care of someone or be around illness because they think they’re going to get it, or they’re ignorant or fearful,” she says. “Whatever the reason, they will abandon you and you have to survive on your own, which I did.”

What helped take the sting away, Grier says, is that her mother and friends visited her after the surgery while she recuperated in the hospital during a several-day stay. “But it is time-consuming, and it’s not something everyone is prepared for.”

Essentially, cancer patients must have plenty of true grit. Grier steeled herself for a lengthy recovery period and took nothing for granted. “They usually say the average is about five years before you’re in remission. But there are people who have been in remission for five or 10 years and their cancer returns, maybe even in another form,” Grier says. “So every day is a gift.”

In her bold, new book, Grier revealed another shocking bit of news delivered by her gynecologist. This was back when she dated Richard Pryor, the now-deceased comedian. The doctor said Grier had cocaine residue built up around her cervix and in her vagina (she speculates that Pryor, without her knowledge, could have put cocaine on his penis before sex—or that his seminal fluid could have contained the drug). Her doctor said the buildup could create serious cervical and uterine problems. Eventually, Grier ended her relationship with Pryor because of his drug abuse.

Although the revelation sparked all kinds of snarky online comments, including a healthy dose of skepticism, doctors offer a more level-headed response. “As far as we know, there is no direct connection between cocaine and cervical cancer,” says Svetlana Kogan, MD, a board-certified internal medicine holistic physician in New York City.

But the surprising disclosures in the memoir don’t end with cancer and cocaine. Grier also dropped jaws by revealing she was a rape survivor.

Grier disclosed so much about her life, she says, because she wanted to share her experiences and get people’s attention. “When women share information, we have so much more communication with one another than men do,” Grier says. “I think [rape is] an area we’ve ignored, and now it’s time for us to pay attention.”

Through the years, Grier experienced sporadic incidences of sexual abuse. The first occurred when she was raped at the age of 6 by two boys while at home alone with them. (Grier’s aunt had left them temporarily unsupervised.) Grier told no one.

“I felt that I might lose my family because of all the anger and pain I knew there’d be,” Grier recalls of the incident. “So as an obedient child, I didn’t say anything. I was traumatized by it, and after that I began to stutter. To this day, I still stutter when I speak.”

At age 18 Grier was raped again. This time it was a family friend who violated her while they were on a date. Again, and for the same reasons she’d kept quiet at 6, Grier remained silent.

A few years later, Grier suffered an attempted rape, but this time she was able to fight off her attacker. “That third attempt was my moment of truth,” Grier says. “I was transformed into someone with this ‘fight to the death’ mentality. I didn’t care who was going to suffer. I just knew that I wasn’t going to [suffer], and from that day on I changed.”

By the 1970s, Grier says, she was finally empowered. At last, Grier more closely resembled one of those tough-talking, fierce-eyed femme fatales from her blaxploitation flicks days. “Women were beginning to stand up for themselves,” she says. “I’d experienced it firsthand.”

She faced down both sexual abuse and cancer—and survived. How ya like Foxy now?

“We’ll Call You If Something Is Wrong”
That’s usually the last thing women hear as they leave a gynecologist’s office after a Pap smear—the screening test for cervical cancer. But what if no one calls?

“I absolutely hate hearing this,” says Svetlana Kogan, MD, a board-certified internal medicine holistic physician in New York City. “As a patient, when my doctor tells me this, my answer is, ‘No, you fax me the results, or you have me come in to discuss the result.’”

A Pap smear is still the gold standard test for detecting cancer or abnormal cells that may lead to cervical cancer. In addition, the test can also find noncancerous conditions, such as infection and inflammation.

The test is key to helping doctors determine the likelihood that cervical cells are precancerous and that they will develop into malignant, irreversible mutations, Kogan says.

“If all women get regular screenings, we will root out this cancer 100 percent,” she says. “Doctors get an amazing and unique opportunity to treat this deadly cancer when we catch it early.”

Physicians get their first crack at cervical cancer when they look at Pap smears under a microscope. If they see precancerous cervical cells (called atypical cells), they know it’s important to order a colposcopy. A colposcope (a magnifying instrument) allows doctors to more carefully view the cervix and check for abnormalities that may make early cancer treatment necessary.

This is why it’s so important that women learn the outcome of their Pap tests, Kogan stresses. “Things can get lost in the shuffle [of a doctor’s office],” she says. Kogan’s advice? “Be proactive and get test results no matter what,” she says. “Legally, doctors have to provide results to the patient.”