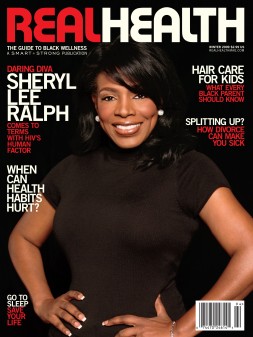 An advocate for HIV/AIDS awareness and prevention, entertainer Sheryl Lee Ralph has battled the virus on all fronts for almost two decades. But even the most stalwart warriors tire—especially when those they fight for refuse to save themselves.

Like most people, Sheryl Lee Ralph has her shining moments. She has found enormous success on the stage (as a Tony Award nominee in the original Dreamgirls), on the small screen (as Brandy Norwood’s TV stepmom on Moesha) and in her personal life (as wife to Pennsylvania State Senator Vincent Hughes). But in her ongoing fight as a vocal AIDS advocate, even a powerhouse like Ralph faces frustration. And often, as she explains to Real Health, the biggest frustrations arrive from an unexpected source: the very people she’s trying to help.

“I can’t understand this. For kids 15 to 24 years old, they’ve been hearing about HIV and AIDS for as long as they’ve been alive. Yet 50 percent of new infections are among young people in this age group of every race, color and ethnic group,” Ralph says. “Why don’t they use condoms? Why aren’t they hearing the prevention and protection messages? Why aren’t they choosing to save their own lives?”

Ralph says that she once asked her father the very same questions. His response gave her pause. “Most of them think it’s not going to happen to them,” he said. “That’s how human beings are.”

During a trip to Africa to organize a women’s forum to unite American and African women in a discussion about their experiences with HIV/AIDS, Ralph once again witnessed the human factor in action.

“Last year in South Africa, we met a woman who we could see was just so shamed that her husband was [HIV] positive,” Ralph says. “She was still sleeping with him. And we asked, ‘Why are you still sleeping with your husband?’ She looked at us and simply said, ‘Because he is my husband.’”

That revealing moment stayed with Ralph. “In this work that I do around HIV/AIDS, it’s never just about the disease; there’s always something else,” she says. “Very often, it’s a relationship with a man and how a woman feels about herself in regard to that relationship.”

Ralph has been traveling around the globe to raise awareness of HIV/AIDS prevention and testing. One way she delivers the message is through her gritty one-woman show, Sometimes I Cry—inspired by real women’s stories about their battle with the virus. Lately, Ralph says, she’s been hearing from men in the audience more often.

The men tell Ralph that she must include the man’s story, that she must figure out the “duet” so that men and women can “sing together.”

But despite this unexpected chord she has struck, Ralph is hesitant. There’s the human factor after all—people are capricious; they’re unpredictable; they’re in denial. She recalls her father’s words. That’s how human beings are.

“I meet these brothers,” she says. “You know, the brother who spends the week in jail and comes out on the work program on the weekends. He’s supervised, but he goes back to his regular life on the weekends. But he knows he has a different life on the inside—he calls that life and that sex ‘survival.’ That’s deep, too,” Ralph says.

Nevertheless, she doubts whether most people are prepared to hear these deep and often disturbing stories. Take, for example, the sexual tale that one of these men shared with Ralph. It involved a potato chip bag. Turns out, she says, that the bag was used as a makeshift condom.

“Are we ready to hear that man’s story?” Ralph asks.

Or the story about the father who gave his wife a good beatdown, showed no love to his son and skipped out on them both. That story continues today because the son carries all that rage. The last time he beat his girlfriend, he felt sad after he did it, but he knows he’ll do it again.

“Are we ready for men to say that kind of stuff?” Ralph asks. Then she answers her own question. “We’re not ready for that, which, of course, just sets somebody up for more damage.

“Trust me, when you start telling Truth, people start getting upset,” Ralph continues. “They don’t know how to cope.”

Next, Ralph focuses on another truth, one that is rooted in HIV/AIDS history and does indeed make some people uncomfortable.

Ralph compares the virus’s rampage in the black community to the U.S. polio epidemic that lasted from 1916 to the mid-1950s—another topic she and her father discussed. (Ralph’s uncle was stricken by polio.) Her father called it “an ugly time in America,” she says.

Drawing a parallel to the current HIV epidemic in the black community, Ralph’s father told her that when the disease was confined to the disenfranchised, it was allowed to grow.

“It’s just the same as now,” Ralph says. “The money that is spent on black people and other people of color doesn’t go very far because they die quicker. They’re looked at and not valued. Hard. But it’s a fact.”

To counter this ugly reality, Ralph wants to see more diverse programs and HIV/AIDS messages expressly developed “for black folks and other people of color in a way that really hits them where they are,” Ralph says. “One message does not fit all. But somebody’s got to know your journey, feel your worth and create messages that are relevant to you.”

But that’s not the only reason that awareness messages for HIV/AIDS are failing. Ralph points out other causes, ones that are rooted in the complexities and contradictory nature of human behavior.

“A lot of folks just don’t care,” she says. “And they want to hide their crazy behavior. They want to keep it in the closet. They want to make sure nobody knows. And, honestly, it has nothing to do with whether someone’s gay. But people want to deflect the light from what’s really happening.”

What Ralph refers to are the troubling statistics that show HIV/AIDS at epidemic proportion in African-American communities. She is especially angered by what she perceives as some people’s support of the status quo over “honest, forthright conversations with our children [that will teach them] to protect themselves.”

But Ralph offers more than criticism. She implements solutions. In an effort to raise awareness and get people involved in eradicating the virus, Ralph and her husband created a grassroots initiative last year called the Test Together campaign. The two launched a website, TestTogether.org, where couples can find out where in their area they can get tested together for HIV.

Ralph says many people expressed skepticism about the initiative’s ability to get couples to test together. “I was dumbfounded,” Ralph says. “Why would they not [want to test together]? Isn’t that the ultimate test of who you are in your relationship?”

“But let me tell you something,” she says with renewed vigor. “For whatever reason, God has put me out on the trail across America, and a few times outside of this continent, to see what’s going on.”

And what has she discovered? “It’s very simple,” Ralph says echoing her father’s matter-of-fact outlook. “People will always be people. They are deeply flawed and in many ways brilliantly perfect in their flaws.”

But be that as it may, Ralph keeps it simple too. She’s a diva who won’t be deterred.

And, yes, the South African woman did contract the virus from her husband.