After a family health scare, Kellyann D. Williams chose to reexamine her own lifestyle.

Kellyann D. Williams was too caught up in life to worry about nutrition and exercise. Not only did the Philadelphia resident have a teenage daughter to raise, but she held down a demanding federal government job that required her to travel and dine out frequently.

Then there were familial and social obligations, such as her regular meetings with her sister circle, during which she enjoyed fried chicken and collard greens. Her weight slowly inched up to a hefty 240 pounds on her five-foot frame.

By age 39, she’d gone from wearing a size 8 to a size 20. Being big ran in the family. Both her mother and grandmother were full-figured women. Besides, Williams dabbled in makeup artistry and was well groomed. But when her oldest sister had a health scare and was advised by her doctor to start working out to control her high blood pressure, Williams took notice.

“She was toning up. She looked happy. Exercise made her more vibrant,” Williams said. “I said, ‘I want to do it too.’”

That’s how she met Kimberly Garrison (www.kimberlygarrison.com), a fitness trainer who would become her weight loss mentor and close friend.

“Like many African-American women, she was obese but thought she was just a little overweight,” says Garrison. “There’s a perception that we are totally different from other women, particularly white women. We say, ‘I’m not supposed to be that small because I’m black.’ But even if you have a big butt, you’re not supposed to have an extra 100 pounds back there.”

Williams, now 44, began to work out for the first time in her life, doing push-ups and sit-ups and exercising on an elliptical machine at a gym.

“She asked me to do five minutes, and I thought I would die,” Williams recalls. “I would cry and whine and go home achy.”

Under Garrison’s direction, she became mindful about what she put into her mouth: no more fast food, fried food, seconds or beverages with calories. Within three weeks, Williams had lost nine pounds.

Inspired, she added jumping rope and riding a stationary bicycle. Eventually, she bought her own treadmill. Today, she can walk for an hour straight. She has lost 77 pounds, most of which she has kept off.

“It’s like a constant battle,” Williams admits. But at least she’s winning the war.

Jenice Armstrong is a columnist for the Philadelphia Daily News who also runs in local road races and studies martial arts. 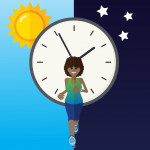