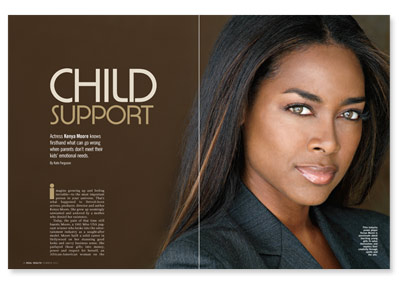 Click here to read a digital edition of this article.
Imagine growing up and feeling invisible---to the most important person in your universe. That’s what happened to Detroit-born actress, producer, director and author Kenya Moore. She grew up seemingly unwanted and unloved by a mother who denied her existence.

Today, the pain of that time still haunts Moore, a 1993 Miss USA pageant winner who broke into the entertainment industry as a sought-after model. Moore built a solid career in Hollywood on her stunning good looks and savvy business sense. She parlayed those gifts into money, power and respect for herself, an African-American woman on the move in a white male-dominated industry.

Moore achieved professional success with roles in movies such as Waiting to Exhale and Trois, TV shows such as Girlfriends and The Jamie Foxx Show, in Jay-Z and Nas music videos and on the covers of magazines such as Upscale and Ebony Man.

But even now as she enjoys her success as a high-powered Hollywood player, Moore, age 40, continues working hard to make sense of what happened to her. “My childhood was very complicated,” she explains. “My parents were both teenagers when they had me. Then my mother decided she would give me away and live her life as though she never had a child.”

That decision remains incomprehensible to Moore. When she was just three days old, her mother abandoned her, leaving Moore’s paternal grandmother with the job of raising her.

But Moore’s mother’s inexplicable behavior didn’t end as time went by. “Years later, I was slowly reunited with my mom’s family,” Moore says. “But my mother continued to pretend I did not exist. Even when I was in her presence, she ignored me as if I was invisible.”

Moore says she didn’t know if her mom had ever been diagnosed with a mental illness, but one thing was certain: This parental rejection wreaked havoc on her girlhood self-esteem.

When she discusses her mother’s past actions, Moore doesn’t call it child abuse. But kids don’t have to be bruised and battered or sexually assaulted or molested to qualify as being abused. Emotional abuse or neglect, as Moore experienced, can also cause deep suffering and long-lasting trauma. “My mother’s demeaning and destructive behavior was deeply disturbing and hurtful to me, especially since I was just a mere child,” she says.

Through the years, Moore’s relationship with her mother remained nonexistent. And what about her father? “The short answer is that my dad always did the best he could,” she says. “But, obviously, some things were out of his control. He moved to Texas when I was 12, so he was not a part of my life on a daily basis and wasn’t there to give me emotional support.”

For children who experience emotional abuse and neglect the consequences are far-reaching. Certainly this kind of rejection and abandonment damages a child’s self-esteem and mental health in general. 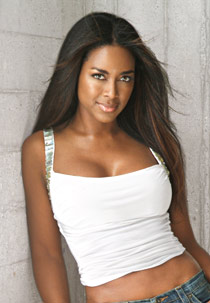 As Moore flowered into a young girl, her pain surfaced. “I began acting out and hurting the ones who cared for me most,” she says.

Acting out is, in fact, a predictable result of child abuse and neglect. Because abused children cannot express their emotions safely, explain mental health professionals, they clamp down on their feelings, which then may erupt in unexpected and unacceptable ways.

But while in high school, Moore got the opportunity to put her behavior into perspective. “I was referred to a professional when I was in the 12th grade,” she explains. “Counseling allowed me to truly see that what happened to me was not my fault. It helped me to see that I wasn’t ‘crazy’ like everyone said I was. My behavior was merely me crying out for help, which is the case for most teenagers. Therapy showed me that I was better than my behavior.”

Today, many young black girls suffer from low self-esteem, which causes them to make poor choices and engage in risky behavior. That’s the primary reason why Moore says she launched The Kenya Moore Foundation, a nonprofit organization. “I created the foundation as way to give back and help other young girls who are silently suffering and need a way out,” Moore says. “For me, it’s a way to help them overcome their abusive home life and challenges so they can achieve greater accomplishments in life with education.”

Moore’s foundation gives scholarship money to bright young girls who are struggling and want to overcome their challenges. “Some of their stories make my heart bleed, and it’s difficult for me to manage [my emotions],” Moore shares. “I’ve cried so many times reading about what these girls are faced with.”

Currently, only girls from Moore’s high school alma mater, Cass Technical High School in Detroit, are eligible for the scholarships. To be considered, the students must submit essays that demonstrate how they’ve shown strength and overcome obstacles while working to maintain Cass Tech’s strict grade point average minimum.

For Moore, the scholarships are also a way to support young girls, especially the ones saddled with emotional issues. Moore believes that young women in particular need a confidante they trust. “Ideally, that person is their mother,” she says. “But most often girls find it difficult to communicate with their parents. I had several role models who I turned to when I needed to be understood and counseled. For me, it was an aunt, a teacher at school and an older friend.”

When she underwent therapy, Moore found it liberating to be able to talk to someone. She is a huge advocate of therapy and was a psychology major in college. Moore believes therapy and counseling can provide an outlet for troubled teens in need of mental health support.

Looking back, as an adolescent in pain, short on self-esteem and self-confidence, Moore never dreamed then that she’d one day claim the Miss USA title. But she did. At the age of 22, Moore became only the second African-American woman to wear the crown. (The first was another native of Detroit, Carole Gist. Gist is among Cass Tech’s list of other notable alumni, such as entertainers Diana Ross, David Alan Grier and Lily Tomlin.)

For those who want to know more about Moore, the actress recalls her life in a memoir, titled Invisible, that is due out later this year. “It’s been nearly 20 years since I first started writing the book,” she says. “It was an emotional journey for me, and I’m proud to have finally completed it. I’m looking forward to having the story inspire and help young girls negotiate their personal battles.”

Today, because the media often portrays women as primarily one-dimensional people, it’s especially hard for girls to develop strong self-esteem, Moore says. “I advise young girls to be leaders not followers,” she says. “Draw close to God if you are spiritual or religious; have positive influences in your life; and be active in sports, music and the creative arts.”

As Moore discovered for herself, these extracurricular activities give girls a stronger sense of self-esteem. By learning to value and love themselves, girls will not only develop confidence---they’ll also ensure they’ll never be invisible.