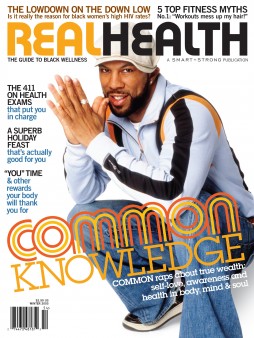 Don’t talk to Common about bling, bullets and booty. He’s too busy nourishing his body and mind and those of our youth.

By music industry standards Lonnie Rashid Lynn (aka MC Common) is an old-school kind of brotha. He eats a plain bowl of oatmeal every morning at his favorite Brooklyn haunt. He prefers his beat-up Discman over the more state-of-the-art iPod. He carries dog-eared copies of the Koran and the Bible everywhere he goes and has more dashikis and Kangols in his closet than J.J. Evans from Good Times.

But for all of the Grammy Award–winning rapper’s old-fashioned ways, there’s one aspect of his life that is decidedly progressive: his health. Once a beer-guzzling, weed-smoking carnivore, today the Chicago native is alcohol-free, smoke-free and meat-free. And he says he owes much of his physical transformation—particularly his diet—to the teachings of hip-hop.

“Hip-hop was the catalyst for me to stop eating certain meats,” admits the 33-year-old father of one, who mined platinum earlier this year with his critically acclaimed sixth album, Be. “Just hearing MCs like KRS-1 and Rakim talk about not eating beef and pork—I was so inspired by them that it made me gain an interest in learning why it was bad. Somebody said to me once, ‘Why would you put death in your body if your body is life?’ That stuck with me. So I stopped eating pork, beef and chicken. I felt clearer and lighter. Cleansed. I ate fish for a while, but eventually I gave that up, too.” He is one of several hip-hop luminaries who have gone vegetarian, including Russell Simmons, Nas and Andre 3000.

Since turning over a new leaf (no pun intended) seven years ago, Common has literally become the poster child for good health. His cheesing mug is plastered on billboards and subway cars across the country, encouraging folks to eat their veggie burgers on behalf of PETA. And if you pay no mind to the idea of snacking on string beans and collard greens, you’re sure to have seen the commercials for his hip-hop–friendly HIV awareness campaign “Knowing Is Beautiful.” Preaching positive messages to a community infamous for its poor diets, staggeringly high HIV rates and illegal-substance abuse, Common takes his role-model status very seriously.

“The fact that I have an uncle who passed away from AIDS was just more motivation for me to speak up,” says the velvet-voiced MC. “I have a non-profit foundation called Common Ground, and our whole premise is raising AIDS awareness—as well as literacy rates—among youth. I speak at colleges, high schools and grammar schools—to whoever will listen.”

Soon, the socially conscious rapper will be taking his message overseas. In January 2006, Common will travel to South Africa with Alicia Keys, world music star Angélique Kidjo and Halle Berry to raise money for Keys’ Keep a Child Alive Foundation, which provides HIV meds to positive folks who can’t afford them.

“As a people, we overlook our health sometimes, because there’s so much else going on [in the community],” Common explains. “AIDS is real, but it’s not our only problem. I can’t tell you how many friends I have whose parents—young parents—are struggling with diabetes and cancer. And since so many of our ailments come from our diets, we’ve got to start changing the way we eat.”

Of course, diet alone isn’t the only secret to good health. “I got into yoga a few years ago,” he says. “Because it is an internal spiritual practice. At the time, I was dealing with life’s struggles,  and it helped me channel my energy. You sweat hard but gain so much.”

The focus yoga gives him will certainly come in handy now that his world is expanding. He’s starring—alongside Alicia Keys, Andy Garcia and Ray Liotta—in his first film, the action flick Smokin’ Aces. Also in the works for this self-proclaimed cap fiend is his own line of hats, SOJI. And he has written three children’s books: Mirror and Me, I Like You But I Love Me and ME: Mixed Emotions (all published by Hip Hop School-House) aimed at boosting kids’ self-esteem. “They’re children’s stories, but adults can relate,” he says.

As if that weren’t enough to keep his Blackberry buzzing, Common is also performing spot dates on his hip-hop homie Kanye West’s international tour, as well as recording his next album, Finding Forever, which drops in 2006. “I’ll be working with J. Dilla and Kanye West and any other genius who comes into the picture,” he promises.

If Chi-Town’s finest seems poised to watch his career—and his life—burst into the stratosphere, it comes after years of turning his life around. “I chose to strive for a healthier life while I’m still in the land of the living,” he says. “I’m not a know-it-all. But I can say I’ve made some progress.” It’s an understatement for a man whose art and activism have helped renew faith in hip-hop’s power to move the crowd.