A Hairy Issue: The Brazilian Blowout Tries to Straighten Up Its Act

Last fall, Brazilian Blowout faced controversy when two salons near Portland, Oregon, reported eye and nose irritations after technicians used the Brazilian Blowout—which supposedly contained no formaldehyde—on patrons. (Formaldehyde is a known carcinogen, and the company’s product packaging claimed the chemical was not used as an ingredient.)

Since then, the FDA has launched an investigation into the product, and the California attorney general’s office has filed a lawsuit over false packaging claims.

Brazilian Blowout Zero reportedly has the same hair-straightening power but contains no formaldehyde. Instead, Zero is made with glycolic acid and a new scent, according to the company.

The company’s CEO, Mike Brady, said the notoriety hasn’t hurt the Brazilian Blowout. “For better or worse, before the media storm maybe 10 million people knew who we were. Now about 200 million [people] know us.”

But the true test of Brazilian Blowout’s longevity will be whether users stay loyal or dwindle to zero. 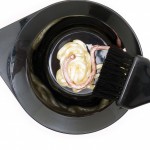