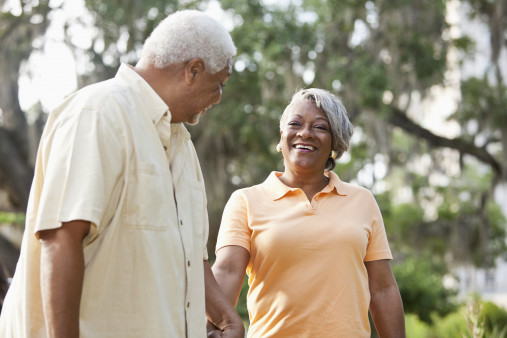 Research also shows that older adults can reap health benefits from staying sexually active. In results from a longitudinal study of men and women ages 50 to 89, published in the journal Age and Ageing, scientists noted positive associations between sexual activity and cognitive function.

However, sexual activity can be difficult for people who are not physically healthy. Good health habits, such as eating well, exercising and getting regular medical checkups, can help older adults maintain their vim and vigor.

In addition, sexual health also involves taking precautions against sexually transmitted infections (STIs), such as chlamydia, syphilis and gonorrhea, as well as HIV. For example, due to hormonal changes—such as postmenopausal thinning of vaginal tissues and dryness—women face an increased risk of infections. Older women who have already undergone menopause and therefore are unconcerned about pregnancy may also be less likely to use condoms with a partner, which places them at risk.

STIs were previously viewed as a risk factor only for young people. But findings show that older adults are also vulnerable. Recent years have seen a dramatic increase in STIs among this population group.

Older people are also at risk for hepatitis B and C, two viruses that can be spread through sexual contact.

Also, in men, testosterone can dip, which may affect male sexual function.

But the full picture of sexual health is not just being able to participate in the physical act of sex. Challenges to intimacy go beyond whether body parts are functional and include the state of one’s overall health. For older adults, physical and mental difficulties may arise in connection with chronic illnesses and life circumstances—such as childbirth, menopause, loss of a partner and retirement.

Ideally, individuals should be proactive and feel comfortable discussing their sexual health with their physician. But talking with your doctor is a two-way street. Health providers must also become more educated about older adults’ sexual habits and lifestyle to address these matters as they relate to overall health.

Sexual health is a key aspect of healthy aging, which is why most experts agree that if a doctor is unwilling to discuss these matters with patients, then individuals should find another physician.