Detail of the Visual AIDS broadside for Stonewall 50 and WorldPride Courtesy of VisualAIDS.org

On WorldPride, Visual AIDS Asks, “What Is 21st Century Liberation?”

Sunday, June 30, marks WorldPride and Stonewall 50 in New York City. As usual, members of Visual AIDS will be seen in the NYC Pride March in Manhattan—and they’ve created a new art project to spark dialogue amid the celebrations and milestones.

This year, Visual AIDS asked an intergenerational group of artists and activists, “What is 21st Century Liberation?” The answers were compiled in a newsprint broadside to be distributed by the thousands during Sunday’s march. (Download your own free copy here.) Artists Avram Finkelstein, who cocreated the iconic “Silence=Death” poster, and Rodrigo Moreira designed the broadsheet. 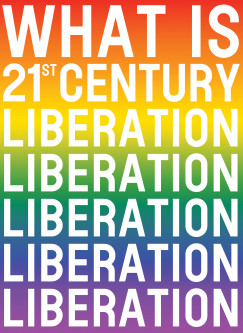 The cover of the Visual AIDS broadside for Stonewall 50 and WorldPrideCourtesy of VisualAIDS.org

In addition, Visual AIDS copresents What Is 21st Century Liberation as a large-scale installation through July at New York Live Arts (219 W. 19th Street, in Manhattan).

In the broadsheet’s introduction, Visual AIDS executive director Esther McGowan describes the project’s genesis and goal. “What if we could make a broadsheet that began to address the complex intersectional issues that link AIDS activism with LGBTQI+ activism, and with all forms of social justice activism, both historically and today? A piece that is about the past, present and future of LIBERATION.

“We hope the words of those involved and their spirit of activism, past and present, will inspire you to consider what liberation means today and for the future, and what we can do to make it not just a dream but a reality for everyone.”

When presented with the individual responses to questions about 21st-century liberation, Finkelstein says he was surprised by the answers. “Not only did everyone have their own ideas about what liberation meant,” he writes, “most of them never even used the word liberation to describe it.”

So whose answers are we talking about? These artists and activists provided the text for the broadsheet project:

Their responses cover a variety of thought-provoking topics, including the problematic dominance of white men at LGBT spaces; the need to view issues through an intersectional lens; the abolition of prisons; the erasure or absences of female-centered people, queer people and people of color; and a movement toward a more just society where people aren’t criminalized and stigmatized for how much money they have or what drugs they use or whether they’re living with HIV. Plus, much more.

Perhaps no one summed up the concept of liberation better than Winter Collins, who, just to remind you, is not even 10 years old. In referencing an artwork by Angus Maguire (beclouded.net), Collins says this:

“Imagine there are three people who want to watch a sports game that’s happening on the other side of a wall. One of them is really short, one is a medium height, and one is really tall. Equality would be as if they each get the same amount of boxes to stand on. Fairness would be they each get the boxes the need to see over the wall. But liberation would be there is no wall.

“So there’s no need for equality, just liberation. Liberation would mean that nobody would really need anything to be able to see the game. But right now, we’re at equality, not fairness or liberation.”

Be sure to get your copies of the Visual AIDS broadside—not just for Sunday but for the other 364 days of the year as well.