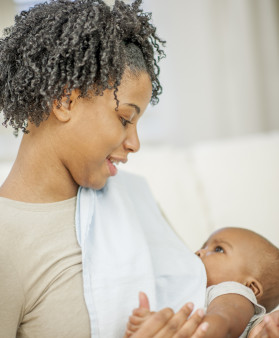 Are Women With HIV Breastfeeding? In the U.S., It’s Hard to Know

A survey of Black women with HIV found that national policy and cultural beliefs contributed to whether they reported breastfeeding.

Unlike women in Canada and Nigeria, African, Black and Caribbean women living with HIV in Miami were less likely to divulge exactly how they were feeding their infants, or what their partners wanted for infant breastfeeding, according to a paper published in BMC Public Health.

The finding comes as women with HIV begin to open up to providers about their desire for and practice of breastfeeding, and as experts and activists continue to press providers to be more open about what’s known about the impact of an undetectable viral load on the safety of breastfeeding for women and their infants.

Josephine Etowa, RN, PhD, of the University of Ottawa School of Nursing, and colleagues gathered responses from 690 African, Black and Caribbean mothers living with HIV in Ottawa, Miami and Port Harcourt, Nigeria by soliciting participation at AIDS service organizations, clinics and community centers. Interestingly, women in Miami were the least likely to return their responses to the survey, with a response rate of just 67%, compared to 89% in Ottawa and 100% in Port Harcourt. All participants had babies since the World Health Organization established its first infant feeding guidelines in 2010.

The mothers were most likely to be in their 30s or 40s. Most were married (ranging from 33% in Ottawa to 85% in Nigeria), and 93% of the women, overall, had had three children or fewer since their HIV diagnosis. Almost all (98%) were on antiretroviral treatment. Two thirds were employed, with women in the United States the most likely to have jobs. Half made their money from their own businesses.

And then there was the issue of cultural beliefs about breastfeeding: nearly one in four women in Ottawa said they came from a culture that prohibited formula feeding, compared to 14% of women in Miami. Interestingly, again, U.S.-based respondents were more likely to go without answering the question—a full 49%.

“These results point to the importance of health care providers providing evidence-based HIV prevention and care,” wrote the study authors. “In addition, health care providers need to be practiced in culturally safe and responsive manner to mee the needs of Black women living with HIV. Global and national guidelines also need to take into consideration the unique needs of those that are impacted by such policies.”

Click here to learn more about breastfeeding and U=U