The debate about the safety of genetically engineered foods remains unresolved as scientists squabble over evidence. 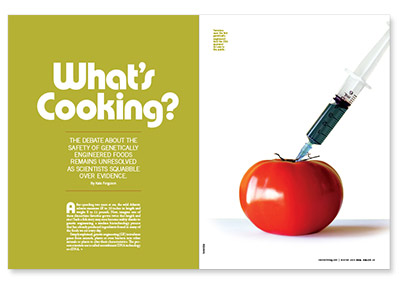 Click here to read a digital edition of this article.
After spending two years at sea, the wild Atlantic salmon measures 28 to 30 inches in length and weighs 8 to 12 pounds. Now, imagine one of these dinnertime favorites grown twice that length and size? Such a fish story may soon become reality thanks to genetic engineering, a modern biotechnology process that has already produced ingredients found in many of the foods we eat every day.

Simply explained, genetic engineering (GE) introduces genes from animals, plants or even bacteria into other animals or plants to alter their characteristics. The process scientists use is called recombinant DNA technology or rDNA.

Historically, human beings have modified crops and animals since people began practicing the science of agriculture about 8,000 to 10,000 years ago. In that process, known as genetic modification, farmers would cross plants (called hybridization) and breed animals in ways to select the most desirable genetic traits. This led to faster growing, bigger and better-tasting, stronger and more nutritious and plentiful crops and livestock. In addition, the process of exposing seeds to chemicals or radiation (called chemical or irradiation mutagenesis) is responsible for more than 2,250 plant varieties developed during the past 70 years.

“Unless you go back to hunter-gatherer societies, humans have been tinkering around with the genetics of food crops and livestock for a long time,” says Martina Newell-McGloughlin, DSc, the director of the international biotechnology program at the University of California, Davis.

Today, we undergo such agricultural experiments for much of the same reasons our ancestors did. “It’s basically a way to modify crops so that they have specific desirable traits, whether it be disease resistance, drought tolerance or improved nutritional characteristics,” Newell-McGloughlin explains.

But back to the wild Atlantic salmon. Why genetically engineer a fish that’s naturally nutritious and protein-rich? To make them grow faster to reach market size in 16 to 18 months instead of the usual three years.

To trigger the Atlantic salmon’s growth spurt, scientists connect a growth hormone gene from a Chinook salmon with another gene from a saltwater ocean fish called a pout to form a carrier gene called a “trans-gene.” Then, fish farmers place the trans-gene into the fertilized eggs of Atlantic salmon. Later, these fish mate with Atlantic salmon who aren’t genetically engineered. The result? The offspring of these naturally smaller fish develop into the faster-growing, bigger, brand-named AquAdvantage salmon.

The creator of these larger fish is Aqua Bounty Technologies, a Canadian company currently awaiting approval from the Food and Drug Administration to market its GE salmon in the United States. But while Aqua Bounty waits, many people wonder about the safety profile of this bioengineered fish, as well as other genetically engineered foods that Americans have been eating since the mid-1990s.

Currently, estimates report that 60 to 70 percent of processed and prepackaged U.S. foods, many of them snack-time favorites such as chips, pizza, cookies, crackers and ice cream, include at least one genetically engineered ingredient.

“I’d say there have been, literally, trillions of meals containing genetically modified ingredients that have been eaten around the world for the past 16 or 17 years,” Newell-McGloughlin says. “They’re being produced at a very high level, and there hasn’t been a single issue that has occurred in relation to this technology.”

But not everyone agrees with Newell-McGloughlin. Other scientists contend that published, well-conducted scientific studies do suggest GE foods may be potentially harmful. Thierry Vrain, a former research scientist for Agriculture Canada, is one of them.  Vrain now promotes public awareness about the possible dangers of GM foods. Vrain says there hasn’t been enough long-term safety testing on how unexpected “rogue proteins” that develop during genetic engineering might eventually affect human beings and the environment. “I think there is cause for alarm, and it is my duty to educate the public,” Vrain says.

In 1994, Americans got their first taste of a genetically engineered food when tomatoes that contained a gene introduced into the fruit to delay its ripening were approved for sale by the Food and Drug Administration.

The genetically modified tomatoes were dubbed Flavr Savr, and demand for the produce grew. But after a while, sellers stopped buying them because they simply cost too much to produce and distribute.

Today, one way scientists create genetically engineered plants is to take a piece of plant material and, using a bacterium (a tiny, one-celled microorganism) as a carrier, introduce the new gene into a single cell of that plant material. “Then it’s possible to create a whole new plant from one new cell,” explains Kevin Folta, PhD, an associate professor and interim chairman of the Horticultural Sciences Department at the University of Florida, Gainesville.

Another way scientists make genetically engineered crops is by using a device called a “gene gun” to shoot tiny particles coated with DNA into plant cells. In this method, the DNA on these particles combines with the plant’s DNA to improve on certain traits of the original plant.

According to Newell-McGloughlin, today’s biotechnology tools are much more predictable, precise and controlled than the old technology scientists once used to introduce traits into plants and livestock. “Quite frankly,” she says, “I think that the preponderance of evidence supports the notion that GM foods have been thoroughly studied.”

Vrain counters that many of the studies done in Europe suggest cause for alarm—but, he says, they’re ignored by the U.S. Food and Drug Administration. For consumers interested in reading about these studies, Vrain directs them to GMO Myths and Truths, a compilation of more than 500 government reports and scientific articles published in peer-reviewed journals. The compilation is the work of two geneticists and an investigative journalist who summarized evidence-based study findings about GM food safety for the public.

“GMO Myths and Truths disputes the claims of the biotech industry that GM crops yield better and more nutritious food, that they save on the use of pesticides, have no environmental impact whatsoever and are perfectly safe to eat,” Vrain says.

But as the biotechnology industry grows, even more genetically engineered crops, such as apples, carrots, cauliflower, coffee, cranberries and walnuts, to name a few, are undergoing field trials.

And many more crops, such as vitamin-enriched golden rice, insect- and disease-resistant rice and fungus-resistant wheat, have moved beyond field testing into development, or are being prepared for introduction to consumers.

Folta predicts genetic engineering will eventually prove its critics wrong. “The next generation of transgenic crops will have much more consumer benefit,” he says. You’ll see potatoes that are safer to eat, food that stores better longer, and apples that don’t brown when you cut them. And you’ll see this golden rice product—the one that delivers vitamin A to the poor and those people all over the world who are deficient in the vitamin—proven to deliver benefits that will, all of a sudden, take the air out of the fear balloon of these people who are against modified foods.”

Realistically, of course, only time and additional scientific evidence will take the bite out of GM food concerns.