Click to watch a preview of “i need space.” Courtesy of Broadstream/The New Group

In the first few minutes of the digital series i need space, Marcus engages in a steamy video sex chat session with an anonymous hunk that ends in an unexpected bodily fluid: tears. Moments later, Marcus chats with his fiancé to discuss wedding details, and then, confused and burdened with guilt, the cheating husband-to-be video chats with his bestie, Lee, a transgender man living with HIV, to unpack his very questionable behavior.

Talk about drama! The Black queer men of i need space are going through it all, including isolation, loneliness, loss and love. And you can watch the seven LGBTQ-themed episodes for free on the streaming platform Broadstream. The first three episodes (the longest is 11 minutues) were posted Tuesday, March 8; the remaining episodes will be released throughout the month. 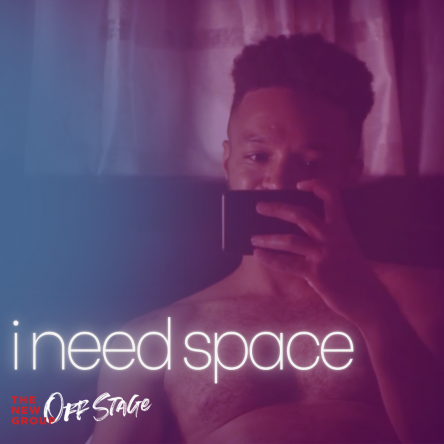 Uniquely, the story is told through a series of video chats and through the lens of Black and Latino queer and trans people. The show is presented by The New Group Off Stage, a theater company that produces plays in new formats.

The digital series is written and directed by Donja R. Love, a playwright perhaps best known for one in two (the title references the statistical fact that one in two gay Black men are expected to test positive for HIV in their lifetime). 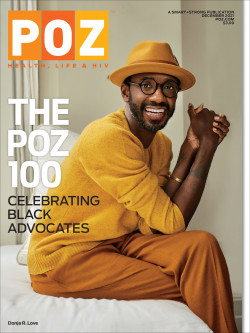 The December 2021 cover of POZ

We recently caught up with Love to learn more about i need space.

First off, can you tell us about the meaning of the title i need space?

“I need space” is a declarative statement that holds true for all the characters in i need space. As queer and trans people, seldom are we given space—space to try, space to fail, space to break or space to heal. The title puts front and center what Marcus, our protagonist, and the other characters need. The question becomes what are you willing to do to get the space you need?

Because of COVID-19 shutdowns, most everyone can relate to communicating via screens. Although the pandemic doesn’t seem to be the reason your characters are using videos chats, did it influence your creating this story? What drew you to this storytelling format?

I first thought of the series during the summer of 2020. We were still in the beginning phase of lockdown. Like so many, the only way to communicate was through the screen during that time. I became curious about what it would look like when all you have is physical space, but you crave emotional and mental space. Placing someone away from everyone and watching them desire closeness and space was compelling.

What underlying themes do you explore in this series?

i need space explores loss, loneliness, love and healing. The series asks, “How much space does one need in order to heal?”

Are elements of i need space autobiographical? Is this work the product of an artist working through specific issues?

I think all my work is autobiographical to a degree. I can relate to Marcus in terms of feeling lonely at times. But I relate the most to Lee. His story is one I know all too well.

American Theatre spoke with Ja’Mel Ashely about their role in our upcoming series “i need space” ahead of its premiere next week on @onbroadstream! Check out the article https://t.co/A4JRz4Xf5D and stay tuned for more @sirjamelashely @AmericanTheatre

Lee, played by Ja’Mel Ashely, is the married trans man living with HIV. Will we see more of him, and why was it important for you to include this character?

Absolutely. As a storyteller living with HIV, I need to write my experiences. Lee was the character to do that through, especially since we don’t see many characters like Lee on the screen. Though Lee is a trans man and I am not, our journey of living with HIV is very similar, and I am so happy that we get to see a character like Lee exist on the screen. He isn’t just a made-up character. His story is that of many, and those stories deserve to be told.

From left: Cedric Leiba Jr. and Christopher Livingston in a screenshot from the digital series “i need space”Courtesy of Broadstream/The New Group

You include explicit sex talk throughout the series. Can you talk to us about the artistic choice to lean into that element and what you aim to convey with the eroticism?

I clutched my pearls so many times when writing the sex scenes. Just writing certain moments in the series had me hot and bothered. Lol. Those scenes stemmed from conversations with friends who spent their lockdown alone. As I mentioned, the idea for the series came during the lockdown. I was fortunate enough to quarantine with my husband. But many were by themselves. In the conversations with my friends who were [by themselves], they expressed their deep longing for intimacy, for sex. So as I explored writing a series where the main character is miles away from everyone close to him, it felt natural for him to have sexual urges and act on them.

Finally, is there anything else you’d like to add?

I am so thankful to The New Group for believing in me enough to create, write and direct i need space. I am indebted to the phenomenal cast and crew who all effortlessly helped bring the story to life. I am amazed by the generosity of Broadstream for giving us a platform so community can see themselves reflected and healing.