The dog’s owner bought the ad to share the good news about his recovery and raise awareness about cancer in dogs.

Dogs are man’s best friend. But some dog owners are pretty good friends to their dogs too. If you’re tuning into the Super Bowl this Sunday, you’ll see just how much one dog means to his owner.

David MacNeil, CEO of car accessory manufacturer WeatherTech, bought a $6 million Super Bowl advertisement to show thanks to the vets who saved his golden retriever, Scout, who had cancer, WMTV reports. Scout is also the company’s unofficial mascot.

Last summer, after 7-year-old Scout collapsed one day, MacNeil learned that he had a tumor on his heart. Scout was then diagnosed with an aggressive cancer of his blood vessel walls, MacNeil told WMTV. The prognosis was grim—Scout was given only a month to live.

“There he was in this little room, standing in the corner…and he’s wagging his tail at me,” MacNeil said emotionally. “I’m like, I’m not putting that dog down. There’s just absolutely no way.”

MacNeil eventually took Scout to the University of Wisconsin—Madison (UW) School of Veterinary Medicine, where he immediately underwent chemotherapy and radiation that targeted his tumor. About a month later, Scout’s tumor had shrunk by 78%. Later, it was reduced by 90%. Now, MacNeil says his tumor is basically gone. 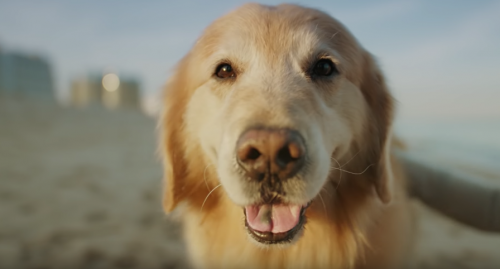 As far as MacNeil was concerned, there was no better way to celebrate Scout’s successful treatment than by putting him in a Super Bowl commercial alongside some of the people who helped improve his condition. In the 32-second ad, Scout is both the star and narrator. (No, he didn’t bark his way through the commercial. An actor lends his voice to Scout.) He’s seen running on a beach with a stick in his mouth and then getting medical care and hugs from UW staff members.

“I’m Scout, and I’m a lucky dog,” he says. “And it’s not because I found this cool stick or that I was on the WeatherTech commercial on the big game last year. It’s that I’m a cancer survivor.”

“So much of what’s known globally today about how to best diagnose and treat devastating diseases such as cancer originated in veterinary medicine,” said Mark Markel, dean of the veterinary school. “We’re thrilled to share with Super Bowl viewers how our profession benefits beloved animals like Scout and helps people too.”

MacNeil doesn’t just want to show his appreciation for Scout’s second chance. He also wants to help raise awareness about how cancer affects dogs and raise donations for UW. (According to the UW, cancer is the No. 1 cause of illness and death in aging dogs.)

The ad featuring Scout will air on Fox during the second quarter of the big showdown between the San Francisco 49ers and the Kanas City Chiefs. But if you can’t wait that long, check out the ad above.

For related coverage, read “Start-Up to Bring Precision Medicine to Dogs With Cancer” and “How Human Genetic Data Could Help Dogs Fight Cancer.”