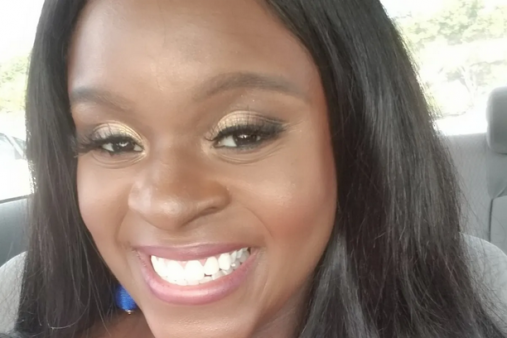 My fibroids caused severe anemia, and I needed a blood transfusion. But I’ve learned to manage the condition and advocate for the compassionate care I need.

As told to Diana Whitney

About five years ago, my period changed drastically. I started having heavy bleeding, so heavy I had to change my pads every 30 minutes. I would bleed for two weeks or longer, then bleed in between cycles. I also had terrible clotting—the clots were huge, bigger than my fist, and really painful.

At the time, I was living in New Jersey and commuting to work in New York City. I was taking public transportation and had many humiliating experiences of bleeding through my clothing. Once on the train, the blood literally gushed out and was dripping down my leg. I didn’t feel comfortable sitting so I stood there, panicked the whole time, checking the back of my pants, praying that nobody could tell what was happening. Luckily, I was wearing black.

This traumatic cycle continued for months. At work, I’d be the last person to get up from a board meeting or conference, because I was scared I’d stained the chair, which happened on several occasions. But even with these extreme symptoms, I didn’t realize there was anything wrong. I normalized it in my own head. I told myself, I’m a woman; women go through hormonal and bodily changes.

It never occurred to me that it might be fibroids. Even though my mom had suffered from fibroids, we’d never had that conversation. I didn’t even think to see a gynecologist until I talked to my sister about my symptoms. She’s a physician, and she came over to the house and looked at the insides of my eyes, the inside of my mouth and the palms of my hands.

“Nkem,” she said, "You have to go to a doctor. You literally look like you have no blood left in your body.”

By then, I couldn’t even walk a few steps without feeling like I was about to pass out. Immediately, I made an appointment for blood work. When the results came back, the doctor called me and said, “You need to go to the emergency room right now. Your hemoglobin level is not conducive to life.”

It turned out my hemoglobin was dangerously low, at a level of three. Normal hemoglobin levels for women are between 12.5 and 15. I learned I had severe anemia from all the months of heavy bleeding.

I went straight to the ER, where they ran a host of tests on me. They did an echocardiogram of my heart, because I had a lingering cough, and discovered that I had cardiomegaly, or an enlarged heart. My heart had been working in overdrive, trying to compensate for the lack of blood in my body.

The ER doctors wouldn’t let me leave after the testing. They were afraid if I walked out the door, I could go into cardiac arrest at any moment. I needed a blood transfusion, so they admitted me to the hospital for two or three days. It was December, right before Christmas. I was exhausted and in shock that my condition was so serious.

At the time, my providers attributed all my symptoms to one large fibroid on the surface of my uterus. They decided not to do a myomectomy to remove the fibroid and instead put me on oral contraceptives to manage the bleeding, which was their immediate concern.

Taking the pill worked for about a year. Then it stopped working, and they switched me to a contraceptive injection. That was in 2017, and I’ve been on the shot ever since. I’m a slave to that shot because it improves the quality of my life so much. But I know it’s only a Band-Aid. The only way to treat fibroids is through surgical intervention.

Over the past few years, more fibroids have grown all over my uterus. They’re different sizes, shapes and locations, some within my uterine cavity. I need good care, but when I moved to Maryland, it was hard to find a doctor. The first one I saw was horrible and very condescending. Once while she was doing my ultrasound she said, offhand, “Your uterus is massively distorted.”

I realized I needed a compassionate physician who could be a partner on my journey. I’d already been through a lot of physical trauma. My condition had almost killed me. I didn’t need the additional mental trauma of being mistreated by my doctor.

Finally, I switched providers, and it’s like night and day. My new doctor explains things to me, he takes the time to listen and address my concerns. We work together as collaborators in my care, making sure I receive optimal treatment. When he suggested surgery, I felt comfortable talking about the options with him because he’s so compassionate. I’m a good candidate for a minimally invasive myomectomy, and we’re looking to schedule that next year.

There’s a huge stigma around talking about female reproductive issues, especially fibroids. After I moved, I discovered a group called The White Dress Project, which focuses on raising awareness about uterine fibroids and breaking down the walls of silence surrounding this condition. Fibroids are shockingly common: about 70% of white women and 80% of Black women will be diagnosed with them by the age of 50.

Until I found The White Dress Project, I felt like I was suffering in silence. Being able to find my voice and tell my story has been liberating. I am Nigerian-American and culturally, we don’t share our stories when it comes to health issues. We keep them private.

But sharing your story is a key part of the mission of this organization, and I can see how much I’ve grown by being part of it. I can share my story without fear now. My own struggle with fibroids has evolved into a lifelong mission of advocacy. I feel like I’m giving the gift of my story to the world, so it can help empower somebody else.

Nkem Osian is a patient advocate with The White Dress Project, an organization dedicated to raising national awareness about the uterine fibroid epidemic and filling in the gaps in care, education and research. She shares her fibroids story to help break the silence around this common, but often overlooked, gynecological condition. https://thewhitedressproject.org

This entry was originally published in Healthywomen.org and is reprinted with permission.

Hysterectomy Is Not the Only Option for Women With Uterine Fibroids