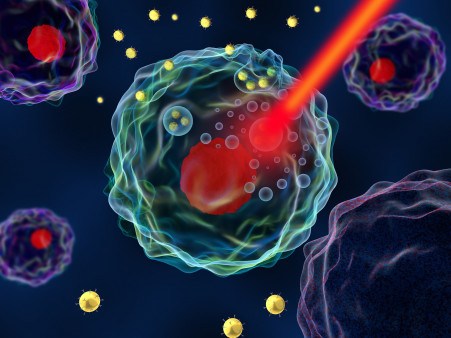 Today, scientists who research future cancer treatments are studying particles so tiny that they can only be seen when placed under powerful specialized microscopes. These small fragments that can penetrate through the membranes of cells in our bodies are called nanoparticles. They may allow doctors to target and destroy cancerous tumors without damaging the healthy tissues and organs surrounding them.

Basically, the way nanoparticles work is simple. These ultra-small particles can carry, either outside or inside, a drug that kills cancer cells. After nanoparticles are injected into a blood vessel and arrive at the site of the tumor, the minute materials accumulate inside the malignant growths and target them for death.

According to Michelle S. Bradbury, MD, PhD, a clinician-scientist and director of The Michelle Bradbury Lab at Memorial Sloan Kettering Cancer Center in New York City, in the future, nanoparticles may be designed to target different types of tumors in the body directly and deliver more than one drug to the site of growths.

In cancer treatment, nanoparticles of any size or shape can be made from different types of materials. Scientists created many nanoparticles using gold, silver and platinum because the physical and chemical properties of those precious metals allowed researchers to shape the particles into perfect vehicles to deliver medicines directly into cancerous tumors. Additionally, their special physical and chemical properties could help doctors diagnose the whereabouts of cancer cells in the body.

For example, scientists found that when they attached one cancer-killing drug, called TNF (tumor necrosis factor), to gold-flecked nanoparticles, doing so helped the med to home in on cancer cells. In addition, researchers noted that when light—in the form of a laser blast or magnetic energy—was applied to a tumor containing bits of gold, the nanoparticles rapidly heated up to cook and kill tumor cells, a treatment known as hyperthermia therapy. (In animal studies, cancerous cells in tumors treated with heated nanoparticles died with very little damage to the surrounding tissue.)

Now, researchers are checking out particles made of silica, carbon and fatty materials known as liposomes. Bradbury led a study on mice that showed silica nanoparticles could trigger a type of programmed death, called ferroptosis, in cancer cells. “This is the first time we have shown that the particle has intrinsic therapeutic properties without associated toxicity,” she says.

Also, scientists are studying nanodiamonds to treat leukemia. Molecules of cancer-fighting drugs attached to these tiny particles made from the gemstone would fight cancer of the blood by ensuring the meds remain in cancerous cells longer.

In addition, researchers are looking at nanoparticles that deliver special proteins into cancer cells so these substances accumulate in the cells’ core, causing them to self-destruct.

Future treatment studies for cancer include injecting special nanoparticles called NBTXR3 into tumors and then blasting the particles with X-rays to create electrons that destroy the cancerous cells. With the use of these particles, scientists hope to improve the effectiveness of radiotherapy (also called radiation treatment) on liver cancers without hurting surrounding healthy tissue.

Fatty substances, called liposomes, are also being studied in clinical trials, and some are already in clinical use. Scientists say these nanoparticles tend to be safe, overall, for delivery of cancer-fighting drugs and may make some other medicines with limitations safer.

Although this research looks promising, plenty of questions still need to be answered about how toxic nanoparticles can be to normal tissues, how long they remain in the body and whether a dependable way can be found to monitor just how effective they are in targeting and eliminating cancer.

“Medical doctors should use the smallest possible dose needed to treat tumors and can slowly increase this amount as necessary,” Bradbury suggests. “The behavior of different types of particles in the body needs to be studied in animal models before being allowed to be given to humans.”

At this time, drugs developed using nanotechnology are being used to treat breast, lung, ovarian, pancreatic, prostate and brain cancers. “In the future, we hope to be able to treat all tumor types by choosing and designing the best combination of nanoparticles and drugs,” Bradbury says.