Before you fire up the barbecue, get informed about the connection between grilled meat and cancer. But don’t worry—you can lower your risk without losing any of the flavor or summer fun. 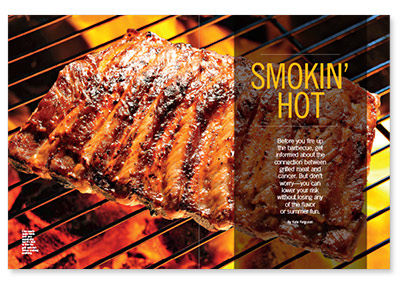 When American soldiers returned home during the late 1940s and 1950s, many migrated to the suburbs with their families. In these spacious environments, they bought homes that came attached to big backyards and other open spaces ripe for outdoor activities. One of the pastimes families began enjoying was eating outdoors. People needed a portable way to cook. Enter wheeled brazier grills.

But cooking food on brazier grills was iffy. The units were notorious for burning the food on the outside while leaving it uncooked inside. What’s more, when a stiff wind whipped up, charcoal cinders would fly everywhere. As you might expect, these grills were soon dethroned by more improved and efficient models—the predecessors of today’s modern gas and electric grills.

But regardless of the type of grill used, when you ignite a flame under meat, or any other food on a grill, something interesting happens: A chemical reaction transforms that piece of raw meat into a lip-smacking treat. More specifically, the meat undergoes a phenomenon called the Maillard reaction, better known as browning. The heat of the fire causes amino acids and sugars in meat to interact and form a bonanza of new compounds. That’s when the surface of the meat becomes golden brown and crunchy. What’s more, the reaction affects the meat’s flavor, as does the amount of fat on the meat.

The reaction is named after Louis Camille Maillard, a 20th century French scientist. He discovered that when a mixture of sugars and amino acids was heated, it gradually turned brown. Meat, of course, is protein that contains amino acids and sugars (the carbohydrates in the feed the animal digests is converted into sugars its muscles need to burn for energy). When meat is cooked, its outside surface is hotter than the inside. This triggers browning and concentrates the strongest flavors on the meat’s surface. The result? Your mouth gets hit with tons of flavorful sensations when you bite into grilled meat.

You can enhance this flavor boost by marinating  meats in a mix of tasty spices and liquids before grilling them.

Unfortunately, not all the chemicals produced by this cooking process are harmless. Some may increase your risk of cancer (though this will depend on the type of meat and cooking method you use). The chemicals to look out for are called heterocyclic amines (HCAs) and polycyclic aromatic hydrocarbons (PAHs).

Although findings show that HCAs and PAHs can cause cancer in animals, scientists aren’t sure these chemicals cause cancer in human beings. “One difficulty with conducting such studies is that it can be difficult to determine the exact level of HCA and PAH exposure a person gets from cooked meats,” says the National Cancer Institute (NCI). “Although dietary questionnaires can provide good estimates, they may not capture all the detail about cooking techniques that is necessary to determine HCA and PAH exposure levels.”

In general, meats grilled at temperatures above 300 degrees have high concentrations of HCAs, and smoking or charring the meat (as some devotees prefer), further contributes to PAHs forming. Right now, findings show an association for increased risk of colorectal, pancreatic and prostate cancers among those who consume large amounts of well-done, fried or barbecued meats. This is why the World Cancer Research Fund and the American Institute for Cancer Research (AICR) suggest limiting the consumption of red meat as well as processed or smoked meats.

The good news, according to the NCI, is that cooks can stop these chemicals from forming. A few simple steps will cut the risk: Partially cook meat in a microwave before grilling or pan frying; reduce the amount of time the food is cooked; and line grills with foil so the meat isn’t directly exposed to an open flame or a hot metal surface.

In addition, buy lean cuts or trim the fat before grilling meats; flip often; remove charred or burnt pieces; and don’t make gravy from the drippings. Also, cut back on grilling certain types of meat, such as the red and processed meats associated with higher risks for colon cancer.

Another solution to healthier summer backyard grilling is to add fish and chicken to the menu. Also, use spices, herbs, hot peppers and sauces to marinate white meat. Indeed, studies show that marinating meat, poultry and fish for at least 30 minutes can reduce the formation of HCAs. “Using a mixture of vinegar, lemon juice or wine along with herbs and spices seems to be the key,” says the AICR.

Scientists don’t know precisely how these marinades help lower HCAs, but researchers believe that compounds in these ingredients are responsible.

And how about beer as a marinade? Recently, researchers found that brewskis could in fact help lower PAH formation in grilled meat. Pilsner and black beer are the beverages to reach for to mix up a marinade, say scientists from the American Chemical Society. Why? Because these beers, when used as a marinade, cut the amount of PAHs in half.

For this study, researchers marinated samples of pork for four hours in pilsner beer, non-alcoholic pilsner beer  or a black ale and then cooked them on a charcoal grill until the pieces of meat were well done. Findings showed black beer had the strongest effect and reduced the levels of eight major PAHs by more than half when compared with unmarinated pork.

The scientists, whose results were published in the Journal of Agricultural and Food Chemistry, concluded “the intake of beer-marinated meat can be a suitable mitigation strategy” for those concerned about grilling and cancer.

Marinades are also a great way to flavor meats before you grill them. Elizabeth Karmel, author of Soaked, Slathered and Seasoned: A Complete Guide to Flavoring Food for the Grill, serves up these finger-lickin’ coatings among a variety of “flavor accessories” that make grilled foods unforgettable. Mop sauces, rubs and barbecue sauces can enhance the flavor of grilled meats, she suggests.

According to Karmel, marinades are a liquid mix of a fat and an acid—for example, an oil and a vinegar. A rub is a powder or a paste made from herbs, spices and other ingredients. Mop sauces are thin liquids made from ingredients such as tomato juice or beer, and a barbecue sauce is usually a thick, sweet sauce. Homemade barbecue sauce can double as a marinade. These concoctions are usually made from a tomato sauce and cider vinegar base loaded with a multitude of spices, splashes of hot sauce, and a dash of lemon juice.

Many grill gods and goddesses swear by a slowly simmering mix over reduced heat. As the mixture simmers, you can add a variety of flavor enhancers to suit your taste. For a sweet barbecue sauce, the usual additions include brown sugar, honey or molasses—even agave nectar. And if you crave a fiery hot sauce, try cayenne pepper or chilies.

But to steer clear of high levels of HCA formation on grilled meats, don’t add too much sugar to marinades, experts caution.

Finally, one last way to avoid PAH forming on grilled or barbecued meat is plain common sense: Clean the grill after each use. Simply scrubbing down a dirty appliance can get rid of built-up, cancer-causing residues from previous grilling. The result? None of that gunk can get into your freshly grilled steaks, chicken breasts or pork chops and then into your body.