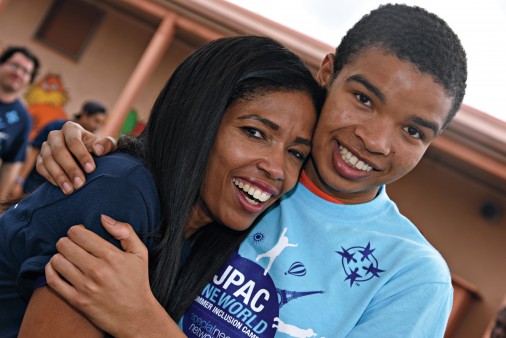 For children with autism and their families, the key to dispelling discrimination and stigma is advocacy.

Areva Martin knows firsthand the stigma autism carries. That’s because the talk show host, civil and disability rights attorney and founder of Special Needs Network Inc., a California-based organization that fights for education and resources to help children, families and adults living with developmental disabilities, is the mother of a child with autism, her 16-year-old son, Marty. Here, Martin discusses her experiences as a community organizer, legal professional and mom who has made it her mission to obtain services and help create socialization programs for kids and parents who are facing one of the fastest-growing developmental disorders in the United States.

RH: As a parent, what do you think continues to be the biggest misconception about autism and the children and people in general who have this condition?

AM: I think the biggest misconception about kids with autism is that they are somehow limited in their abilities to live full and productive lives. Many people have an image of kids with autism that’s based on either what they’ve seen on television or perhaps what they’ve read about. But they fail to realize that autism is a spectrum disorder in that it affects all kids differently. No child on the spectrum is like any other child on the spectrum.

RH: In your opinion, what are some of the most pressing needs of kids with autism, especially in an educational setting?

AM: Inclusion. The most pressing need is for adults and educators to understand how significant and important it is for kids with autism not to be isolated. Many school districts around the country are still segregating and isolating kids on the spectrum, failing to provide them with real opportunities to be fully included with their typical peers. Like other children, kids with autism learn from modeling the kids who are around them, and the kids who are typical learn about inclusion, acceptance and patience from having an opportunity to be around kids who are different.

This is how we learn to accept people of different races, ethnicities and religious backgrounds. We know that when we have opportunities to integrate with any group of people who are different than we are, this leads to greater acceptance. So I’m a big proponent of inclusion in school and community settings, all settings.

RH: What do you tell those who fear people with autism?

AM: Once again, that fear is often bred from what you’ve heard and read, and many times, a lot of it is inaccurate. At Special Needs Network, we run a free summer program called Camp JPAC (Joe Patton Academy Camp) that’s for kids who are on the spectrum and their typical peers. In addition, we also have about 130 camp counselors who are high school and college-age students. One of the biggest things that we share at the end of every summer is how different the kids are than what they expected.

Counselors come into the program expecting the kids with autism to be so different—aggressive or dangerous—and then they realize, Wow, they’re just like any other children that I’ve dealt with. But, again, people must get that opportunity, that one-on-one firsthand opportunity that changes those misconceptions.

RH: Your son, Marty, was 2 when he was diagnosed with autism. What were some of the key challenges that you faced as a parent dealing with the health care and educational systems at that time?

AM: In health care, I couldn’t find qualified doctors who could make the diagnosis and who were accessible. L.A. county is a huge place—there are 11 million people—and the care was very fragmented. So there’d be a doctor he’d have to see in one location, then I’d have to drive 10 to 15 miles to get therapy or treatment that was recommended by that doctor.

Fortunately, I was able to do that for Marty because I’m self-employed, and I could take a full day off work each week. But the average working parent doesn’t have that luxury. Most parents can’t miss a whole day of work each week for an eight-week summer program for their child. So getting the care in communities is complicated.

In the area of education, after I spent one summer in Santa Barbara so my son could participate in a particular program, the people who taught there—renowned professors and clinicians—exposed me to this concept of inclusion. So when I went to enroll Marty in kindergarten, I wanted him to be fully included.

I got a lot of pushback from the school district because they wanted Marty to go into a special education classroom. I fought for a whole year to get him into a traditional classroom. The first year he was in this classroom, his teacher would not speak to him or acknowledge him. He was so angry, and it felt like Marty didn’t belong in the classroom. So I had a lot of pressure to put Marty in a special ed classroom, to send him to a special education school. That’s very common for parents who want their kids to be on general education campuses or in their neighborhood schools; often, there’s a tremendous amount of resistance.

RH: Since then, what changes have you seen in the educational system, and what changes do you hope to see that haven’t as yet happened?

AM: I’ve seen more acceptance and the fact that kids with autism can be included because school districts now are more educated and aware. There’s also been more advocacy and attention brought to this issue. The incidence of autism is now 1 in 68 kids. It was 1 in 150 or 1 in 160 when Marty was diagnosed, so the sheer number of kids who have autism has caused there to be more awareness of the condition.

Today, I think people are at least more open to a way of educating kids that they weren’t, say, even in 2006, which was 10 years ago. So in a decade, from 2006 to 2016, I think there has been more awareness. More people talk about autism; more stories are written about it; and there’s been more scientific research about the condition—and all of this has had a positive impact.

RH: What are the pros and cons of sending kids with autism to schools specially designated for them?

AM: The pros are that these schools are solely focused on autism, so a lot of the programs are geared to meet the kids’ needs, and they have the expertise. The cons are, and this is I why I never sent my son to one, is that all the kids there have autism. So if your goal is to have your kid fully included, you don’t have that opportunity at a school that’s just for kids with autism because everybody there has autism. A lot of parents feel like I do, that the schools have an institutional feel to them and there’s a segregated population.

What I tell parents as an advocate and as a special lawyer who represents kids in disability and discrimination cases is, there is no formula for a family looking to provide the best in education or medical care for their child with autism.

What I tell parents to do is to put together a team of people they trust: educators, doctors, family members, community people, folks who you know have expertise, who know your child, who love you and your family. Then make the best decision for your child, based on his or her individual needs.

Your child may thrive in one of these special education schools, so it’s really important for parents to arm themselves with the most knowledge that they can. They need to find experts in their own community and then make decisions based on what’s best for their child and their families’ individual needs and abilities.

When I was very heavily involved in filing lawsuits for families against school districts, I’d meet parents who literally quit their jobs or divorced their spouses because they had read that someone else did this or they saw a special on TV. I think that’s bizarre, and I counsel people against it.

You can’t live your life based on what other people do, because that may be the worst thing that could happen to you.