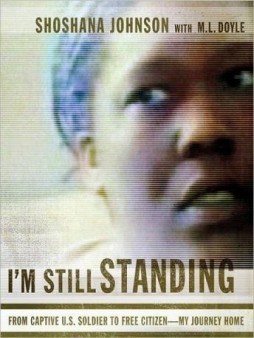 Eight years ago, Shoshana Johnson made history as the first black female prisoner of war. But she’s paid a high price for fame.

While fighting in the Iraq war in 2003 as part of the U.S.Army, Shoshana Johnson was one of 33 soldiers in a convoy ambushed by Iraqi forces. Eleven of Johnson’s colleagues died. She was shot in the leg and captured—along with four male soldiers and a white female soldier named Jessica Lynch. Johnson spent 22 days in a Baghdad holding cell praying for rescue. Then the Marines came, about two weeks after saving Lynch and the others. Johnson was happy to go home. And then the nightmares began.

Johnson also couldn’t sleep. She jumped at loud noises, angered easily and struggled with depression. These symptoms are recognized as post-traumatic stress disorder (PTSD), a mental health condition that’s experienced by about 30 percent of men and women who have spent time in war zones.

What’s more, Johnson’s ordeal was largely overlooked by the media, which lavished more attention on Lynch. (Later, Lynch would say U.S.government and media spin doctors manufactured stories about her fighting underfire and sustaining injuries from enemy guns and knives, and being “rescued” from Iraqi troops at the hospital where she was being treated.)

Before you left for active duty in Iraq, did anyone discuss post-traumatic stress disorder with you?

No, that wasn’t discussed. But when we [the POWs] came home,we were asked certain questions. Of course I denied there was any [mental health] issue. It was a family member—my aunt, who’s a registered nurse—who told me I had a problem. She went to my doctors and told them what she’d noticed. I began to receive treatment within a few months.
What did your aunt notice that made her say you had a problem?

She noticed my startled reactions to loud noises. I wasn’tsleeping; I had a quick temper, and then there were times when I would go intoa serious depression.
When did your symptoms start and become serious enoughfor you to seek treatment?

The symptoms started maybe a month or two after I came home.
What did you think being a soldier was going to be like?

I really didn’t see it as being any different for females compared with males. I’m from an Army family. My dad did 20 years; my sister was in the Army when I joined, so I knew that a soldier basically trained forwar and then their secondary job is either being a cook [my Army job] or supply personnel, such as a medic. But I knew the basic duty of someone in the armed forces was to train for war, so none of this was anything new to me.
As a mother did you feel additional pressure to keep things together on the home front?

I definitely did. Often female soldiers think we can go to war and then when we get back home we can revert to that oh-so-cuddly mommy. And you know what? We can’t do that. Coming home from war is not that easy. I think that we put a lot of stress on ourselves trying to fit a mold in our heads about what we should be like and what we should be doing. I think when men come home they’re allowed to be angry, they’re allowed to be aggressive. And people are still supportive. They’re like, “Oh, he just came home from war.” But I don’t think people give female soldiers the same consideration.[It’s like they think], “Oh she just came back from war, but she’s a woman so she’ll be OK.”
What have you told your daughter about everything that’s happened to you?

I just gave her a big overview. I told her, “Mommy was in the Army; she went to war, got shot and captured and then she was rescued and came home.” When I told her that [last year], she was 9 years old. But as she gets older, she’ll ask more detailed questions. When she does, I’ll give her honest answers.
You said that race played a role in the media not focusing on you as much as they did on Jessica Lynch. Do you still feel thatway?

Not as much now. Since my book came out, I have gotte nlittle blurbs in magazines about it. It’s not like I’ve gotten full spreads in Ebony [magazine] or anything like that, but now I think it’s not so much about race as it is the situation at the time. When Jessica Lynch was rescued, there was a lot of hoopla about her being rescued because no one knew if [any of us would] be found and there was no information available. As a result, the media pumped up the situation. By the time that [my group] came home—we were the last ones alive—that situation just wasn’t as pumped up [by the press].
You applied for military disability benefits. How does this work?
In the Army, what you have to do is ask for a medical retirement. Once you ask for it, they administer a series of tests. Then the doctors’ reports are sent to a medical board and a physical evaluation board(PEB)—there are four in the country. My files got sent up to this board, and they evaluated all the medical records and assigned a percentage to each of myissues. Once that’s done, they send the paperwork to [Washington] DC for processing. At that point, they pronounce you as fit for duty or unfit for duty. Then they assign you a percentage for each issue that you have.
When were you discharged from the service?

I was discharged in December 2003.
At this point, do you have any connection to the military?

I’m not a civilian. I’m considered a military retiree. so I do get military benefits.
Why do you think the military made it so difficult for you to get your status approved?
The issue came up when they denied I had PTSD. They didn’t want to give me a [retirement eligibility] percentage for PTSD. When they returned my paperwork, I received a zero percentage. What they were saying is,“Your condition is not that bad,” even though I was in treatment and takin gthree medications at the time to control my PTSD. That was my main fight with them. They recognized my leg and back problems, but the PTSD was a big fight.
What gave you the strength not to give up that battle?

I didn’t want to have PTSD and it took me a long time to accept it, so I wanted the military to acknowledge my condition. In the end, it didn’t make that much of a difference as far as money or benefits. I think it wound up being 75 bucks a month, which isn’t much. But the big thing for me was to have them acknowledge that what I experienced was traumatic and that they were responsible for my care.
Did you experience any stigma because you suffered from a psychological disorder?

No, never. My family has always been supportive. They agreed with my aunt when she said that there was definitely something wrong with me and I needed to go see a psychiatrist. And they pressured me to do it too. Also, I haven’t heard anything negative from strangers about me disclosing I have PTSD and receiving treatment for it.
How long does your doctor say you should stay in treatment?

At this moment, that’s up in the air. My doctor told me that as long as the war is ongoing and so much in the news, I need to stay in therapy. Once the conflict subsides, which I hope is soon, then that kind of news won’t be all over TV to act as a PTSD trigger for me.
How can you tell if the treatment is working? What signs of successes do you see?

Now I can go to school. Before I couldn’t handle interacting with people that much. There were days I didn’t leave my house. Now, I go out in public and I am active in my community. My family members are the ones who notice the difference. I remember instances when I tried to go off my medication for six months after I thought I felt better. After about a week, my family looked at me and asked me if I was taking my medication. When people around me can spot the difference, then I know I need to go to therapy and take my medication. When I first started therapy, I went once a week. Now, I see the psychiatrist once a month.
What have you learned about PTSD that you didn’t know before?

I’ve learned that besides the PTSD symptoms I had, there area lot of other signs, such as alcohol consumption, substance abuse and being anadrenaline junkie. These are people who try to replicate the natural high you get from being in danger. It’s the feeling soldiers get when they’re in combat. When some PTSD sufferers do dangerous things, they are doing it to create that natural high. I hope people remember this if they have a loved one who doesn’t just have classic PTSD symptoms like I had. Pay attention if all of a sudden the person wants to go bungee jumping or skydiving and do crazy stuff like that. Those are signs that person needs help.
Would you say PTSD treatment has helped you?

I think taking medication, therapy sessions and seeing a psychologist and a psychiatrist have helped me get so much better from the time that I got home until now.

Can PTSD With Depression Raise Premature Mortality Among Women?