The FDA says that 12 percent of imported spices are contaminated with ’filth.’ But does this unappetizing finding pose a health risk? 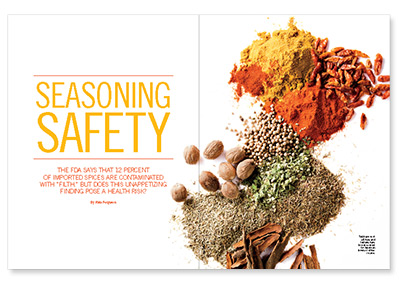 There are big bucks in the buying, selling and making of spices. These botanicals—the ground-up plant seeds, dried leaves, barks, stems or roots that flavor our foods—comprise a global enterprise that’s also a billion-dollar business in the United States.

In 2012, market research reported the spice industry’s revenue at $9 billion with an estimated gross profit of a little more than 35 percent. Import of spices was valued at $1.2 billion from 100 countries. What’s more, the demand for many of these colorful seasonings is increasing as the public craves new flavors to tickle their taste buds and tempt their appetites. People are going gaga for exotic flavors and ingredients, spurring the growth of many ethnic cuisines that specialize in spice-laden dishes. In addition, a growing awareness of the possible health benefits of spices is sparking much interest from the organic food and beverage industries.

“While many Americans enjoy traditional foods, at the same time they expect their foods to be seasoned and well balanced with variety and exciting tastes,” writes author Susheela Raghavan in the Handbook of Spices, Seasonings and Flavorings. “Ethnic foods with their multidimensional flavor and texture profiles will provide this, especially cuisines that include a variety of spices, seasonings and condiments.”

But all this fascination with spicy foods and flavorings has a downside. As recently discussed in a U.S. Food and Drug Administration report, spices commonly used by Americans may arrive with unwanted contaminants.

The report’s executive summary opened with an unappetizing introduction. “In light of new evidence calling into question the effectiveness of current control measures to reduce or prevent illness from consumption of spices in the United States, the FDA developed a risk profile on pathogens and filth in spices.”

The FDA findings reveal that about 12 percent of spices arriving stateside included “filth.” The FDA defined spice to mean “any [dried] aromatic vegetable substance in the whole, broken, or ground form” used to season foods—including dehydrated onion and garlic and other kinds of dried veggies used as seasoning. More pressing, undoubtedly, is what the agency means by “filth.” According to the FDA, it found insect parts; live and dead whole insects; animal, bird and insect excrement; hair from humans, rodents, bats and other mammals; and other yucky, inedible materials in spice shipments. In addition, researchers found decomposed body parts, feathers and other structural components of birds’ wings, as well as stones, twigs, staples, wood slivers, plastic, synthetic fibers and rubber bands mixed in with the spices.

In response to the report, the American Spice Trade Association (ASTA) issued a statement stressing that imported spices routinely undergo extensive cleaning, processing and treatment for pathogens, such as salmonella.

But the association also admitted that spices—classified as “raw agricultural commodities”—“are commonly exposed to dust, dirt, insects and animal waste before they are harvested, and there are additional opportunities for contamination during primary processing, storage and transportation.”

The issue is of growing concern because contaminated foods are a common cause of foodborne illnesses that sicken millions and even kill thousands each year.

In media interviews, Robert E. Brackett, PhD, a professor and interim department head of the Illinois Institute of Technology’s Institute for Food Safety and Health, has called spices “stealth ingredients,” adding that a dash of contaminated spices could create huge medical issues for those who eat them.

“These ingredients are used in small amounts, so people tend to forget about them,” Brackett said. “In fact, what we’ve seen over the past few years is that many of the foodborne outbreaks have been traced back to some sort of dry ingredient.”

The FDA report identifies three outbreaks of foodborne illness in the United States attributed to spices. Those outbreaks occurred between January 2007 and April 2010. According to the report, all three outbreaks were associated with spices contaminated by salmonella.

But the American Spice Trade Association says these three incidents stand “in contrast to hundreds of such incidents during the same period attributed to [illnesses caused] by leafy green vegetables, cantaloupes and other fresh produce.” In other words, the FDA data actually prove that dried spices are not a significant cause of foodborne illness in the United States.

Currently, the FDA allows for certain maximum levels of natural or unavoidable defects in foods for human use. In fact, it created a handbook listing “food defect levels”—a.k.a. the amount of filth that is OK for people to consume. “The FDA set these action levels because it is economically impractical to grow, harvest, or process raw products that are totally free of non-hazardous, naturally occurring, unavoidable defects,” explains the agency. But the FDA also notes that “products harmful to consumers are subject to regulatory action whether or not they exceed the action levels.”

And although many may find the existence of food defect levels uncomfortable, the agency maintains its commitment to ensuring the safety of America’s food supply.

In 2011, President Obama signed the agency’s Food Safety Modernization Act (FSMA) into law. FSMA directly affects the handling of spices, and as the act undergoes continued implementation, many preventive measures are being put into place to ensure that the country’s spice supply is safe for consumers.

Michael Taylor, the FDA’s deputy commissioner for foods, stresses that the agency isn’t suggesting that consumers avoid spices. But the United States imports more than 80 percent of its spices, and only 1 percent to 2 percent of all imports at American borders and ports are inspected. That’s why, according to Iowa State University’s Agricultural Marketing Resource Center, the FDA views foreign and domestic food safety as a critical public-health issue.

The risk profile report was a way to address the increased potential for foodborne illnesses generated by spices imported into the country. To further address safety concerns, ASTA stresses that it’s willing to team up with the FDA and other companies on this issue. The association created an industry manual that establishes standards for the safe shipping and handling of imported spices. These guidelines work together with FDA regulations already in place and the newer standards currently being implemented. “ASTA shares [the] FDA’s commitment to safety,” says Cheryl Deem, the association’s executive director.

But consumers can also help themselves. To help reduce the chances of becoming sick from contaminated spices, Taylor suggests that people add seasonings to their food before cooking  meals, not after.

In addition, Jim Lynn, the corporate communications officer from McCormick & Company, the world’s largest maker of seasonings, suggests that people buy their spices from trusted resources. “Whether they’re [spices] grown in the United States or other parts of the world, McCormick exercises the same high level of quality control throughout our supply chain,” Lynn says.

That said, the FDA believes it is possible to significantly reduce the risk of illness from consuming contaminated spices in the United States. More comprehensive FDA scrutiny places spice producers on the hot seat. These companies are charged to better police the complex supply chains their ingredients pass through. This means the companies that import spices from small farms in a variety of different countries must better understand and oversee the methods and processes used in these locations. That, perhaps, will be the most important ingredient in this recipe for successfully safeguarding the purity of our spice supplies.