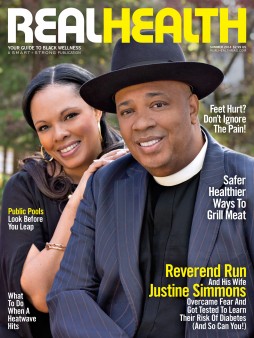 The call to action came to Reverend Run in his sleep. The vision convinced him to wake up the black community about a serious scourge in their midst: diabetes. 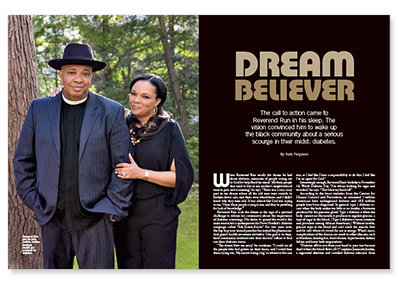 When Reverend Run recalls the dream he had about diabetes, memories of people crying out to God for help flood his mind. “All these people that used to live in my mother’s neighborhood were in pain and screaming,” he says. “There was a very crazy part in my dream where all the old men were outside in broken-down cars, and there were wheelchairs, and I didn’t know why they were sick. It was almost like God was saying to me, ‘I hear these people crying to me, and they’re perishing for lack of knowledge.’”

Reverend Run took the dream as the sign of a spiritual challenge to inform his community about the importance of diabetes screenings. His desire to spread the word is the main reason he’s a spokesperson for Novo Nordisk’s diabetes campaign called “Ask.Screen.Know.” For two years now, the hip-hop icon turned preacher has joined the pharmaceutical giant’s health awareness initiative. One goal is to shepherd community residents into their doctors’ offices to find out their diabetes status.

“The dream blew me away,” he continues. “I could see all the people who had gotten on their knees, and I could hear them crying out, ‘My mom’s losing a leg,’ or whatever the case was, so I feel like I have a responsibility to do this. I feel like I’m an agent for God.”

According to the latest statistics from the Centers for Disease Control and Prevention, an estimated 7 million Americans have undiagnosed diabetes and 18.8 million people have been diagnosed. In general, type 1 diabetes occurs when the body makes too little or no insulin, a hormone produced by the pancreas gland. Type 2 diabetes is when the body  cannot use the insulin it produces to regulate glucose, a type of sugar in the blood. (Type 2 diabetes is more common and prevalent among African Americans.) Without insulin, glucose stays in the blood and can’t reach the muscle, liver and fat cells where it’s stored for use as energy. What’s more, complications of the disease can result in other illnesses, such as blindness, hearing loss, heart disease, hypertension, kidney failure and lower limb amputations.

“Diabetes affects you from your head to your toes because that’s where the blood flows 24/7,” explains Jeannette Jordan, a registered dietitian and certified diabetes educator from Novo Nordisk. Jordan is also on the campaign team with Reverend Run and his wife, Justine. “We don’t need that extra sugar in the blood,” Jordan says. “We need blood sugars in their normal range so people can live a long, healthy life.”

But if diabetes goes untreated, the disease becomes a killer. In fact, according to the American Diabetes Association, diabetes contributes to the deaths of almost 232,000 Americans each year. But if diabetes is detected and treated in its earliest stages, it’s possible to save lives.

“If you already have diabetes, the good news is the disease can be managed,” Jordan says. “You don’t have to end up with all the complications.”

Justine admits that when her husband first joined the campaign last year, she numbered among those who are unaware and uneducated about diabetes. “Some of the risks, such as being over 45 and overweight, African American with a family history of the disease, I was all those things at that time,” she reveals. “I was scared to take the diabetes risk factor test.”

Reverend Run’s involvement in the campaign helped open his wife’s eyes to the truth about diabetes. She learned that people living with the disease can often control it by making healthy lifestyle changes. “And if you don’t have diabetes,” she says, “you can avoid it and stop the cycle.”

The illness is a subject close to Justine’s heart. Her father had diabetes, her grandfather died of it, and her aunt fell into a coma because of the disease. As Justine can attest, diabetes is not confined to older adults. “It had slipped my mind, but my cousin died young of diabetes,” Justine says. “She didn’t take her insulin, and her diabetes got out of control.”

But many people don’t understand the connection between insulin and diabetes. One of the key messages of the campaign is to educate folks about this aspect of the disease. “In diabetes, you really need insulin,” Jordan says. “Insulin is something that helps diabetics better control their blood sugar.”

In Reverend Run’s family, his father had diabetes. “I heard about it around the house,” he recalls. “When my dad died, he was managing the disease, but I don’t know what else he had going on in his life, or if he died from the complications of diabetes. That’s what motivated me to become proactive instead of reactive. When you’re proactive, you can probably stop the disease before it gets to you.”

In the Reverend’s book, when it comes to diabetes, confrontation—and screening—is everything. “Many people are scared to find out what’s going on in their lives,” he says. “But what you don’t know can hurt you, so confront it. I always tell people, ‘If you’re afraid, just take your little afraid self straight to the doctor.’ The thing is, you’re going to be afraid, but when you find out your test result, at least you’ll be able to attack the disease more effectively.’”

Reverend Run admits that he also had to confront his own fears. “I started believing I might have diabetes,” he says. “I didn’t know what was going on with me, so I went to the doctor.”

Fortunately for Reverend Run, the tests showed he didn’t have diabetes.  But based on everything he’d learned about the disease’s risk factors, Reverend Run decided to change his lifestyle. “I’ve lost some pounds; I’ve been working out; I weigh in every Wednesday—and I’m someone who’s always avoided scales,” he says with a laugh. “I’ve found that—and I preach this—what you don’t confront, you can’t heal.”

To manage diabetes, lifestyle changes are key. Research shows that the disease—and in particular type 2 diabetes—responds almost magically to eating healthier foods along with getting moderate levels of physical activity.

Jordan suggests that parents embrace healthier lifestyles and become better role models for their children. When she realized the role diet played in contributing to diabetes, Jordan switched from cooking fried chicken, rice and gravy, potato salad and mac and cheese—the foods she grew up on—and began serving healthier foods. As a result, her daughter also began to eat healthier.

“What we want people to know is that making these changes isn’t as difficult as they might think,” Jordan says. “I still eat a lot of the foods that I enjoy, but I don’t eat as much and I’m preparing them differently.”

At Reverend Run’s house, his family’s diet has also undergone a transformation. “Now, it’s fresh fruits and vegetables,” Justine says. “Our 18-year-old son, Diggy, he goes to the store to get spinach, or he gets mad because we don’t have any broccoli in the house, or he’s driving to the store to make sure he has lean meats, and he’s eating brown rice.” She pauses then adds, “And fortunately slash unfortunately, he’s also watching us like a hawk. He’s like the doggone police. But it’s all good!”

Justine wants readers to take the pharma company’s test because: “If you take Novo Nordisk’s diabetes assessment online, you’re eligible to come to Run’s house and take a little tour,” she says. “We’ll have a diabetes educator there to teach you a lot of different things about diabetes, healthy lifestyle and exercising. We’re really excited about that.”