Racial Disparities in PrEP Use Are Getting Worse

Pre-exposure prophylaxis (PrEP) is not benefitting Americans equally across racial/ethnic groups and regions, and the disparities are worsening over time, according to findings presented at the 24th International AIDS Conference (AIDS 2022). The new data are available on the AIDSVu website.

While PrEP uptake rose steeply among white Americans in relation to new HIV diagnoses, prescriptions for Black and Latino people aren’t meeting the need. PrEP was less likely to reach people in the South, a cause for alarm as the region has become the epicenter of the American HIV epidemic. 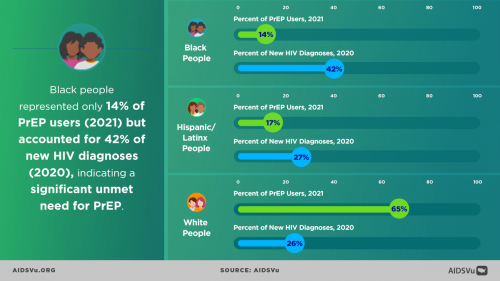 PrEP can dramatically reduce the risk of HIV acquisition, but not all groups have adopted it at the same pace. In particular, the health system has failed to serve Black and Latino Americans compared with their white peers, despite the fact that these groups face a higher lifetime risk of acquiring HIV.

Patrick Sullivan, DVM, PhD, of Emory University’s Rollins School of Public Health, and colleagues performed an analysis of PrEP use relative to new HIV diagnoses. They used commercial pharmacy data to identify 124,835 PrEP users by race/ethnicity and region from 2012 to 2021. This represents about a third of Americans with a PrEP prescription.

The researchers measured equity using a metric called PrEP-to-need ratio, calculated by dividing the number of PrEP users in a group by the number of new HIV diagnoses in the same group during a particular year. The PrEP-to-need ratio is a more meaningful way to look at PrEP uptake than sheer numbers, since it accounts for vulnerability across demographic groups, according to Sullivan.

“Prevention programs should be guided by PrEP equity metrics that take into account both the use and need, not by PrEP equality metrics looking to get certain levels of coverage in all groups,” he said. “We haven’t taken into account that different populations and communities come with different needs.”

PrEP use has burgeoned among white Americans since it was introduced in 2012, while HIV diagnoses have fallen in that group. White people represented 65% of PrEP users in 2021 but just 26% of new HIV diagnoses in 2020.

Among all PrEP users in the United States, only 8% were women, despite the fact that women account for 18% of new HIV diagnoses. Racial equity in PrEP distribution is also a gender issue, since Black women bear more of the burden of HIV than their peers in other groups. Estimates suggest that 1 in 75 Black women in America will acquire HIV in their lifetime, compared to 1 in 309 white women and 1 in 287 Latina women. 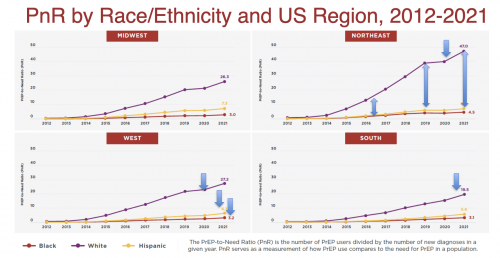 “In each quadrant, the PrEP to need ratio in each year is highest for white residents of that region, intermediate for Hispanic residents and lowest for Black residents,” said Sullivan. “PrEP equity would be if all of these lines laid on top of each other.”

White people in the Northeast had the highest PrEP use relative to HIV diagnoses of any group, with 47 people taking PrEP per year for every 1 person who acquired HIV. In the same region, the ratio for Black people was just 5 to 1—less than one-tenth. For Latino people, the ratio was 7 to 1.

PrEP-to-need ratios were lowest in the South, which accounts for half of new diagnoses despite having 38% of the U.S. population, according to the CDC. Nearly 20 white people in the South were taking PrEP for every new HIV diagnosis in that group, compared with just over 3 Black people and 6 Latino people per diagnosis.

Black Midwesterners faced the worst PrEP-to-need ratio: Only 3 Black people in this region were on PrEP for every new HIV diagnosis. Of the seven states with the greatest unmet need for PrEP among Black people, three were in the South (Alabama, Arkansas and Mississippi) and three were in the Midwest (Iowa, North Dakota and South Dakota).

What’s more, disparities have widened in all regions since the approval of PrEP, indicating that PrEP equity has decreased over time. The data also show that the steady rise in PrEP use slowed during 2020—the first year of the COVID pandemic—though it picked up again in 2021.

These findings underline the importance of equitable PrEP distribution plans that consider the disproportionate impact of HIV on certain populations. 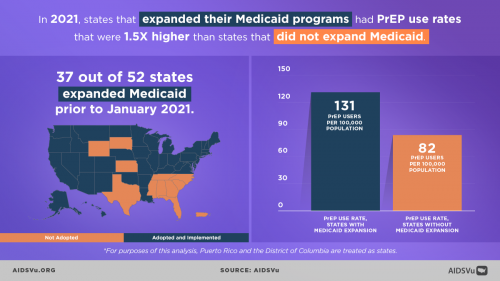 Policies can help bridge the divide. States that introduced PrEP drug assistance programs, which help provide medical services and cover the costs of PrEP for those who need it, have had more equitable rollouts. States that have expanded their Medicaid programs to include more low-income residents have also seen fairer outcomes. The researchers recommend that governments introduce both in the future.