Many years ago, Wayne Starks dreamed he should spread the word and educate folks in high risk communities about hepatitis C, a sneaky and shattering, yet curable, disease. 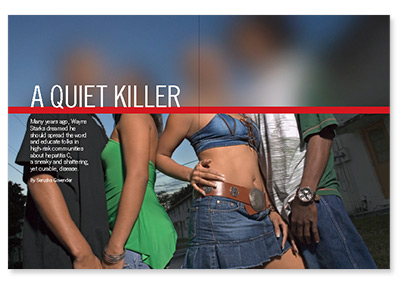 Click here to read a digital edition of this article.
When Wayne Starks tested positive for hepatitis C 14 years ago, at age 50, the former New York City bus driver was devastated but not entirely surprised. Starks had already been diagnosed with HIV and was on antiretroviral treatment. He’d been going through a tough time and was regularly abusing drugs and alcohol. Many of his friends at the time already had contracted hep C and warned him that he probably had it too.

“One of my best friends, Manny, had hep C,” Starks says. “He warned me that since we’d used drugs not to be surprised if I came up with hep C.”

Shaken, Starks talked to his doctor. He learned that the hepatitis C virus (HCV) caused widespread damage and scarring to the liver. His doctor told him that those living with hep C showed very few symptoms and often didn’t know they were infected until it was too late. Still, for years Starks’s blood tests showed no sign of the virus, so he continued living his life as usual. He believed he’d dodged a bullet. What he didn’t understand was that he represented several groups considered at extremely high risk of contracting the disease.

Hep C is a blood-borne virus spread most commonly through sharing needles and syringes during drug use, through tattooing, and through blood transfusions and organ transplants that took place before 1992, when sensitive screening tests for hep C were developed. Less commonly, HCV is spread from mother to child during childbirth and through sexual contact (particularly through rough sex among gay men). Health care workers are also vulnerable through accidental needle-sticks.

What’s more, the baby boomer generation—those born between 1945 and 1965—is at elevated risk because they may have been exposed to the virus through unscreened blood transfusions. (About 75 percent of adults already living with hepatitis C come from this group.)

According to the Centers for Disease Control and Prevention (CDC), hepatitis C is the most common blood-borne disease. More than 3 million people are currently living with it, and another 17,000 become infected every year in the United States alone. But the most vulnerable group is African Americans who, experts claim, are twice as likely to contract HCV than the general American population.

Why is this? John Ward, MD, the CDC’s director of the viral hepatitis division, speculates that it “could be because [African Americans] work in more professions that result in injuries that put them in the health care settings where they need blood.”

Starks was sure he’d picked up his infection through intravenous drug use, from shared needles and syringes. But he wouldn’t have known his status if he hadn’t been told to ask his doctor. Until recently, doctors would only test for hepatitis if a patient specifically requested it, and most simply didn’t know to ask.

This is one of the reasons doctors often brand HCV “the silent epidemic.” Another reason is that the disease is underestimated because there’s an absence of visible symptoms for many years. In fact, most people can live with hep C for decades without feeling sick. When symptoms do appear, they include fever, nausea, jaundice, severe abdominal pains, vomiting and very dark urine. But by this time, the liver is often already severely damaged.

When the hepatitis C virus enters your bloodstream, it invades the liver then multiplies rapidly, effectively going to war with your healthy liver cells. Charles D. Howell, MD, director of hepatology research at the National Medical Association, explains that the body’s immune system tries its best to fight off the virus. But during this battle, the liver becomes so inflamed and swollen that the organ suffers severe damage. As combat continues undetected for several years, the body often shows no symptoms.

But “the body, in an attempt to heal itself, deposits a lot of scar tissue,” Howell explains. “That’s basically what [liver] cirrhosis is. Over time, the function of the normal liver cells is lost.”

By the time Starks’s doctor noticed elevated enzyme levels in his liver and gave him an HCV antibody test, Starks knew his luck had run out. The test came back positive, so his doctor referred him to a specialist who did a confirmatory test and then delivered the results to Starks. “My first thought was, ‘Oh my God, I gotta take more medications,’” Starks says. “I wondered how damaged my liver was. I was relieved when he took a biopsy and said I had scarring but it wasn’t that bad.”

The diagnosis was just the reality check Starks needed to kick his drug habit for good. He started living a healthy life; preserving his liver became his No. 1 priority. “I watched what I ate, I didn’t have too many greasy or fried foods…and I tried to buy fruits and vegetables during the week,” Starks says. “There are also foods that are good for the liver; I tried to eat a lot of those.”

Most important, Starks ditched alcohol completely after finding out how much damage the booze was doing to his liver. “Liquor is a really powerful accelerant,” Ward says. “It’s like throwing alcohol on the embers of a fire. Booze really inflames hep C.”

Meanwhile, Starks discussed treatment options with his doctor. At the time, HCV treatment involved regular injections of a drug called interferon several times each week for between 24 to 48 weeks. The regimen was extensive and had numerous side effects that would have put tremendous strain on Starks’s health. He and his doc decided to hold off on medication until something better was available.

Today, treatment drugs for hep C are much improved. In fact, HCV is considered a curable disease. Newly licensed drugs can cure upwards of 90 percent of patients with just several pills each day taken for a few weeks (depending on the degree of infection). It’s even possible to cure patients who have severe HCV-related liver scarring.

And, for the first time, it’s possible to treat the disease with a purely oral regimen (meaning no injections are required). “These newer therapies are requiring shorter durations of treatment, 12 to 24 weeks, with fewer side effects,” Howell explains. “And another advance, in terms of being available to a large percentage of the population, is treatment is much safer.”

Previously, drugs like interferon were too aggressive for many patients. Almost 70 percent claimed they simply couldn’t tolerate the med, which can cause severe flu-like side effects. Now, this shorter treatment schedule means more people can receive care that won’t make them feel sick.

But Starks isn’t ready for treatment just yet. He’s still holding out for even better, safer medications, which doctors agree may be here in the next year or two.

Starks and his doctors believe he can afford to wait. His early diagnosis and healthier lifestyle kept the scarring on his liver to a minimum. Now, at age 63, Starks says he’s very lucky to feel healthy. What’s more, he adds, he’s almost undetectable for both HIV and HCV.

Luck aside, part of the reason Starks is doing well is that he had almost immediate access to decent medical care through his clinic (at St. Luke’s-Roosevelt in New York City). He also advocated for his own health. He knew to ask the right questions about his HCV status, ones most people “wouldn’t even know about,” he says.

The government has recognized that hep C treatment can only be truly effective when coupled with adequate screening procedures. Now, state health departments, prompted by the U.S.  Preventative Services Task Force and the CDC, are requiring that all health care providers offer the HCV test, at least once, to any patient from the baby boomer generation and high-risk groups.

Starks does his part as director for Vocal-NY, an advocacy group. He lobbies for better housing for high-risk groups, and he works on a campaign to boost hepatitis C awareness. Twice a year, the group runs events that offer HCV education and free screenings to the local community.

“This disease is nothing to play with,” Starks says. “It will kill you if you don’t know you have it. But you can live a productive life once you find out. It’s not a death sentence.”

Wayne Starks, after all, is living proof of that.