Adding an androgen-blocking drug to standard treatment for advanced prostate cancer slows disease progression and extends survival, according to two studies presented at the American Society of Clinical Oncology (ASCO) annual meeting this week in Chicago.

The LATITUDE and STAMPEDE trials showed that starting Zytiga (abiraterone acetate) early, along with androgen-deprivation therapy, reduced the risk of death by nearly 40 percent in men with advanced, mostly metastatic prostate cancer. In one study, the time to cancer progression more than doubled.

“For men who are diagnosed with advanced prostate cancer, treatment has evolved into more effective approaches, first with chemotherapy and now with abiraterone,” said Sumanta Kumar Pal, MD, from the City of Hope cancer center in Duarte, California, speaking on behalf of ASCO. “This is good news because using abiraterone could help many people live longer with fairly few additional side effects.”

Prostate cancer is the second leading cause of cancer-related death among men in the United States, according to the National Cancer Institute. Testosterone promotes prostate cancer growth, and treatment often involves drugs that reduce production of testosterone and other androgens. (These are commonly known as “male hormones,” though women produce small amounts as well).

Androgen deprivation therapy, or ADT, prevents the testicles—the major source in men—from making androgens. But other organs, including the adrenal glands and the prostate itself, also make small amounts. Zytiga stops production of androgens throughout the body by blocking an enzyme (CYP17) needed for their biosynthesis. Zytiga is currently FDA-approved for treatment of prostate cancer that progresses despite ADT.

Karim Fizazi, MD, of the University Paris-Sud in Villejuif, France, presented findings from the Phase III LATITUDE trial, which tested Zytiga in 1,199 men with prostate cancer in more than 30 countries. The median age was about 68 years. Though newly diagnosed, they were considered “high risk” because they had high-grade tumors or metastases, meaning the cancer had spread to their bones or internal organs.

Study participants were randomly assigned to receive ADT with either 1,000 milligrams of Zytiga and 5 mg of prednisone once daily or else a placebo. Prednisone helps prevent Zytiga side effects, such as low potassium and high blood pressure, related to excess production of the adrenal hormone aldosterone, which regulates the body’s mineral and fluid balance.

Three years after starting treatment, the overall survival rate was 66 percent in the Zytiga group and 49 percent in the placebo group, representing a 38 percent lower risk of death. The combined risk of death or disease progression was 53 percent lower in the Zytiga group. Based on these interim results, the study was stopped early and all participants were offered Zytiga. 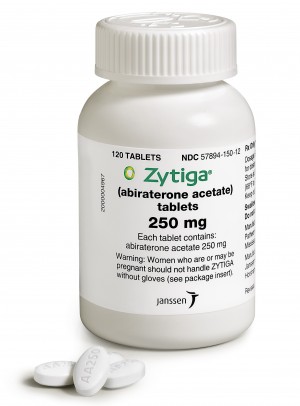 The median survival duration in the Zytiga group could not be determined because a majority of the men were still alive; in the placebo group, it was 35 months. The median duration of progression-free survival was about twice as long in the Zytiga group compared with the placebo group: 33 versus 15 months. Men taking Zytiga also went longer before experiencing rising prostate-specific antigen (PSA) levels, worse pain or needing a different prostate cancer treatment.

Nicholas James, MD, of Queen Elizabeth Hospital Birmingham, in the United Kingdom, presented findings on Zytiga in a more complex study called STAMPEDE. The trial started out in 2006 testing various experimental therapies for prostate cancer and modified its protocol as new agents became available and the standard of care evolved.

James described a group of 1,917 men treated with standard therapy alone or standard therapy plus Zytiga and prednisolone (similar to prednisone). Participants could either be newly diagnosed with advanced local or metastatic prostate cancer or they could have relapsed after prostate removal surgery or radiation therapy, but they could not have previously used hormone therapy. On average, they had less advanced disease than LATITUDE participants.

In STAMPEDE, the three-year survival rates were 83 percent in the Zytiga group and 76 percent in the standard therapy group—representing a 37 percent reduction in the risk of death with Zytiga. Looking at a combined measure of failure-free survival (no worsening of PSA levels, lymph node involvement, distant metastases or death), the difference was even greater, with a 71 percent advantage seen for Zytiga.

While treatment with Zytiga was generally safe, some study participants found it difficult to tolerate. In the LATITUDE trial, 63 percent of the men in the Zytiga group reported severe adverse events, compared with 48 percent in the placebo group. In STAMPEDE, 47 percent of men taking Zytiga plus standard therapy had severe adverse events, compared with 33 percent of those taking standard therapy alone.

Despite taking prednisone, 20 percent of men on Zytiga in LATITUDE developed hypertension and 10 percent developed low potassium, compared with 10 percent and 1 percent, respectively, in the placebo group. Men taking Zytiga were also more likely to have elevated liver enzymes. However, only about 10 percent of patients in each group stopped treatment due to adverse events.

STAMPEDE did not break out these specific side effects, but men taking Zytiga had higher rates of cardiovascular problems (including hypertension) and laboratory abnormalities. Here, the dropout rate before two years due to “excessive toxicity” was 17 percent.

Based on these findings, both research groups suggested that Zytiga should be considered part of the standard of care for men starting hormone therapy. Fizazi said he thinks Zytiga should be started before prostate cancer becomes resistant to ADT.

Providing an expert analysis of the studies, Eric Small, MD, of the University of California, San Francisco, noted that the effectiveness of Zytiga in LATITUDE was similar to that of the chemotherapy drug Taxotere (docetaxel) in a separate study, but Zytiga caused fewer side effects and is given as a more convenient pill rather than an intravenous infusion like Taxotere.

“It is possible that certain patients who have a fast-growing cancer might benefit from a combination of abiraterone and docetaxel, but we need more research to confirm that,” James said. Studies of combination therapy are currently under way.

Small added that there is no reason to believe Zytiga would be beneficial only for patients with advanced metastatic prostate cancer and suggested it should be considered for men with less extensive disease as well.

Complete results from both LATITUDE and STAMPEDE were published in the June 3 advance edition of The New England Journal of Medicine and are available for free online.