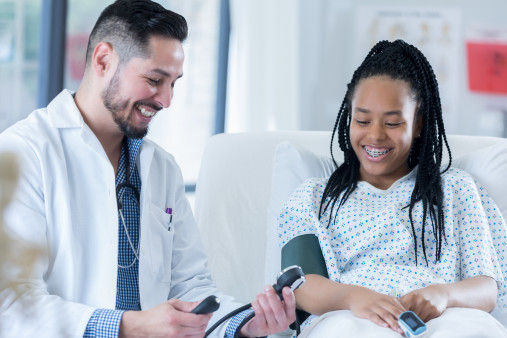 Under New Guidelines More Teens Classified as Suffering From Hypertension

Hypertension among youths is associated with risk of heart disease in adulthood. Now, according to new high blood pressure guidelines developed by the American Academy of Pediatrics (AAP), almost nearly 800,000 more teens have been reclassified as having hypertension, reports AAP News.

For the study, Centers for Disease Control and Prevention researchers examined trends in pediatric hypertension and the effect of the new guidelines on classification of children’s hypertension status. Scientists reviewed data from 12,004 individuals ages 12 to 19 who participated in the 2001 to 2016 National Health and Nutrition Examination Survey, a nationally representative survey of non-institutionalized individuals in the United States.

In 2017, the AAP released clinical practice guidelines for screening and managing high blood pressure in children and adolescents. Previous guidelines deemed kids ages 12 to 17 to be hypertensive if they were on medication for the condition or had blood pressure readings that fell within the top 5 percent for youngsters. Those ages 18 to 19 were considered to have hypertension if their blood pressure numbers hit 140/90 mmHg or above or they took antihypertensive drugs.

The new guidelines lowered the starting point for hypertension in kids under age 18 to 130/80 mmHg or higher. For individuals ages 18 to 19, readings of 130/80 mmHg and use of any medication to treat high blood pressure were signs of hypertension.

These diagnostic thresholds boosted the prevalence of hypertension during 2013 to 2016 from 1.88 percent in healthy children to 14.7 percent in those who were severely obese. Of the 2.6 percent of teenagers who were reclassified as having hypertension, most were obese males ages 18 to 19.

“Clinicians and public health professionals transitioning to the new guideline might expect more youths to be classified as having hypertension,” wrote the authors. “Efforts to address hypertension in youths include lifestyle and environmental strategies that promote cardiovascular health.”

Researchers also noted that when they applied either the old or new set of guidelines the percentage of kids with high blood pressure declined consistently during previous years. The scientists attributed this decrease to early interventions, improvements in diet and increased use of therapeutic medications.

Click here to read more about why so many kids may suffer from hypertension and other illnesses associated with middle age.

Black Men With Allergies at Risk for High Blood Pressure