More than 230,000 women and girls have been diagnosed with HIV in the United States; this year’s theme focuses on prevention.

Tuesday, March 10, marks National Women and Girls HIV/AIDS Awareness Day (NWGHAAD) 2020, organized by the Office on Women’s Health, a division of the Department of Health and Human Services.

March 10 is National Women & Girls HIV/AIDS Awareness Day! Check out our toolkit for resources you can use to help raise awareness about the impact of HIV on women. https://t.co/blAb3XbBdH #NWGHAAD pic.twitter.com/zYKnQ4CgyP

According to the office’s website, WomensHealth.gov, the theme of the 15th annual day of observance is “HIV Prevention Starts With Me: Ending the HIV Epidemic Together.” As such, it highlights how everyone, including people living with HIV, can play a role in prevention. The website promotes NWGHAAD by adding:

“We’ve made tremendous progress against HIV and AIDS in the U.S., but women remain vulnerable to infection—especially Black or African-American and Hispanic women. Any woman who has sex can get HIV, regardless of race, ethnicity, age or sexual orientation. Today, nearly 1 million people in the U.S. are diagnosed with HIV, and nearly 1 in 4 of them are women.”

1 in 4 people living with HIV is a woman. Of those, just 51% are retained in care and have achieved viral suppression. Stigma is one of the greatest barriers to getting tested and getting care. Learn more in our latest blogpost: https://t.co/54Gfmoxvjl #NWGHAAD #NWGHAAD2020 pic.twitter.com/PZVNkHP3MR

The Centers for Disease Control and Prevention (CDC) offers additional data and context:

“The theme encourages women to take charge of their health through measures such as using condoms and taking medicine called pre-exposure prophylaxis (PrEP) if they are at high risk of getting HIV. With the U.S. government-proposed HIV elimination effort called for in the State of the Union in February 2019, even greater strides can be made to address the epidemic in the areas hardest hit.

“Recently, we have seen promising outcomes related to HIV and women. For instance, between 2010 and 2016, there was a 21% decrease in HIV diagnoses among all women within the United States. There has been a 25% decline among Black/African-American women and a 20% decline among Hispanic/Latina women, while rates have remained stable among white women.

“Despite these declines in new diagnoses, there is still more work to be done. In 2017, women made up 19% of diagnoses within the United States. Moreover, Black and Hispanic/Latina women continue to be disproportionately at risk for HIV. In 2017, Black women made up 59% of HIV cases among women despite Black people making up only 13% of the population overall.”

If your partner is living with HIV, talk to your doctor about taking PrEP, a daily pill that can reduce your risk of getting HIV by more than 90%. https://t.co/TgXcAjLr3i#NWGHAAD #EndHIVEpidemic

Although the CDC and the Department of Health and Human Services provide much useful information to the public, HIV advocates have questioned whether HIV campaigns and educational material have been suppressed. For more, read “Who’s Removing Government HIV Fact Sheets Because They Show Condoms?” 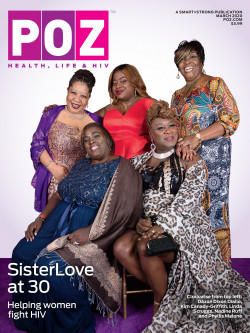 In related NWGHAAD news, don’t miss the current issue of POZ; it’s a special issue that showcases women living with and vulnerable to HIV. And check out our interview with “artivist” Kelly Gluckman, an activist turned photographer who shares her stories and photographs in “Her Selfies of Cellulite Counter the Stigma of Aging and HIV.”