Click to watch “Use Your Voice: Addressing HIV Stigma in Older Women” YouTube/AIDSInstitute

Older people who learn they have HIV are likely to have been positive for 4.5 years—the longest diagnosis delay of any age group.

Wednesday, September 18, marks National HIV/AIDS and Aging Awareness Day (NHAAD) 2019. Launched in 2008 by The AIDS Institute, NHAAD offers a chance to highlight the unique challenges the aging HIV population faces. The institute also created the video above, titled “Use Your Voice: Addressing Stigma in Older Women.” 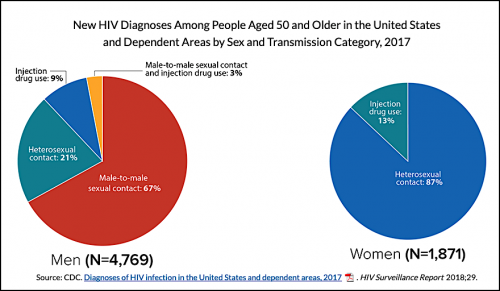 Data from “HIV and Older Americans”Courtesy of CDC.gov

The Centers for Disease Control and Prevention (CDC) has an entire section devoted to “HIV and Older Americans,” including a downloadable fact sheet. “In 2016, nearly half of people in the United States (U.S.) and dependent areas living with diagnosed HIV were aged 50 and older,” states the CDC introduction. “Though new HIV diagnoses are declining among people aged 50 and older, around 1 in 6 HIV diagnoses in 2017 were in this group.”

Older people are more likely than younger people to have late-stage HIV disease when they are diagnosed, according to the CDC, which means their immune system has likely suffered more damage. 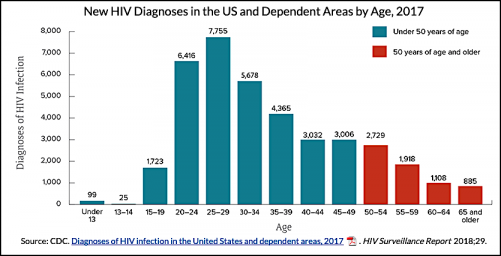 Data from “HIV and Older Americans”Courtesy of CDC.gov

The CDC elaborates on the HIV challenges facing older people:

“Late diagnoses can occur because health care providers may not always test older people for HIV infection. Also, older people may not consider themselves to be at risk of HIV infection or may mistake HIV symptoms for those of normal aging and not consider HIV as a cause. Among people aged 55 and older who received an HIV diagnosis in 2015, 50% had been living with HIV for 4.5 years before they were diagnosed—the longest diagnosis delay for any age group.

“Stigma is a particular concern among older people because they may already face isolation due to illness or loss of family and friends. Stigma negatively affects people’s quality of life, self-image and behaviors and may prevent them from seeking HIV care and disclosing their HIV status.

“Aging with HIV infection also presents special challenges for preventing other diseases because both age and HIV increase the risk for cardiovascular disease, lung disease (specifically chronic obstructive pulmonary disease), bone loss and certain cancers. Older patients with HIV and their care providers need to maximize prevention efforts against these conditions and remain vigilant for early signs of illness. They also need to be careful about interactions between the medications used to treat HIV and those used to treat common age-related conditions such as hypertension, diabetes, elevated cholesterol and obesity.”

You can download more fact sheets and promotional press materials about the awareness day on NHAAD.org.

It’s estimated that by 2030, nearly 70% of people living with HIV in the United States will be older than 50. To highlight the stories and challenges of this aging population, pharma giant Gilead Sciences launched the Age Positively program to support groups fighting the epidemic. The $17.6 million effort helps 30 groups tackling the HIV and aging problem. As part of that effort, Gilead is sharing the stories of older folks with HIV. You can read those profiles here.

In related news, Grantmakers in Aging, a philanthropic organization dedicated to improving the experience of aging, released a new funding guide, Aging Positively: Bringing HIV/AIDS into the Aging Services Mainstream, An Introduction for Funders. The goal is “to help funders, aging services providers, HIV service providers and people living with HIV/AIDS find new and better ways to work together to improve health, social connectedness and quality of life.” You can read more and download a copy here. 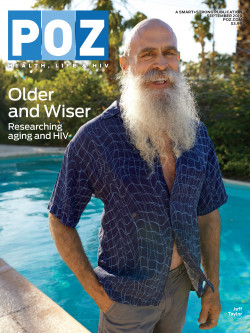 Finally, don’t miss the cover story of POZ’s current issue, “Older & Wiser: How HIV long-term survivors contribute to a better future for everyone,” or POZ blogger Bob Leahy’s post “Being Old With HIV: Our elderly HIV-positive folks are misunderstood, under-researched and largely ignored. That has to change.”