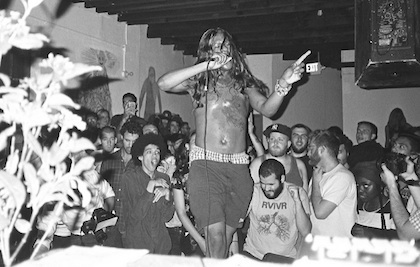 For images and videos, visit mykkiblancoworld.com.

In a June 12 Facebook update, Blanco writes: “Ive been HIV Positive since 2011, my entire career. fuck stigma and hiding in the dark, this is my real life. I’m healthy I’ve toured the world 3 times but ive been living in the dark, its time to actually be as punk as i say I am.”

Mykki Blanco is the rap alias of Michael Quattlebaum Jr., according to a 2013 Village Voice cover story on the artist. “Mykki Blanco raps about gay sex and mutant monsters and Albert Einstein,” the article states, “and although Quattlebaum is a man, Mykki is a woman. She has shared a stage with Grimes, and been photographed by Terry Richardson, and tweets with Azealia Banks….  Intellectually and aesthetically, Quattlebaum’s persona has more in common with Kurt Cobain wearing a dress onstage than it does with RuPaul’s Drag Race.”

The Harlem rapper is active in the LGBT rights movement, Rolling Stone reports, adding that “Last spring, he told fans that he was arrested in Portugal for being gay, and he has spoken out against Russia’s repressive ‘gay propaganda’ laws while supporting LGBT youth in the country. His most recent release was 2014’s Gay Dog Food, and he recently announced that a new studio album is in the works.”