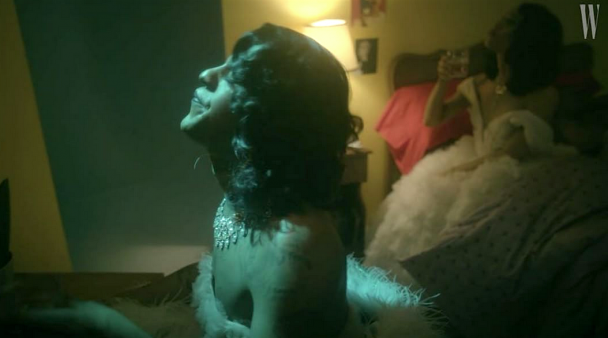 The HIV-positive singer collaborated with W magazine and amfAR for the new work.

Mykki Blanco, an HIV-positive singer who transcends genres and genders, sings about HIV stigma in his newest video, “Hideaway.” Created with W magazine and amfAR, The Foundation for AIDS Research, the video was released April 10 to coincide with National Youth HIV and AIDS Awareness Day (NYHAAD).

The video depicts Blanco, in a strapless white gown, rapping in a bedroom with a serodiscordant couple—one of them has HIV; the other doesn’t—who seem to be locked in an abusive relationship revolving around denial and secrets.

In an interview with W magazine, Blanco talks about HIV stigma and advocacy as well as what has happened in his life and career since he disclosed his HIV status on Facebook two years ago. “I wish there were still more public dialogues,” he said, adding that people have become “lackadaisical” perhaps because HIV is no longer viewed as a death sentence.

He also talks about Truvada as PrEP (pre-exposure prophylaxis) and the importance of getting tested regularly and of using condoms.

The video opens with Blanco offering this voice-over:

When we choose to stigmatize those living with HIV, we do a disservice to our own humanity. As someone who has lived healthfully with the disease for five years now, I know all too well the fear of persecution and shame and what that can do to one’s character and their life. Love and happiness and compassion—they’re birthrights of the human condition; 37 million people living with HIV deserve that, just like anyone else.