Here’s how the “morning-after pill” works. 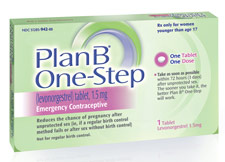 Plan B (and Plan B One-Step) can stop pregnancy in several ways: The tablet can prevent a woman from ovulating, stop her egg from being fertilized, or prevent an egg from becoming implanted in the uterus.

For Plan B—a two-step course—to work most effectively, women or girls must take one pill within 72 hours of having unprotected sex and the other pill 12 hours later. Unprotected sex includes if you didn’t use any kind of birth control or you think your birth control didn’t work, the condom broke or slipped off, your partner neglected to pull out in time, or you were forced to have sex.

The other version of this emergency contraceptive, the Plan B One-Step, is a single pill treatment that you should take as soon as possible, but no later than 72 hours after having unprotected sex.

According to doctors, emergency contraceptives such as Plan B work well for many women without severe side effects. But docs also warn that, like most other birth control, emergency contraceptives won’t stop or treat sexually transmitted diseases. “If you are having unprotected sex or the condom failed, it is strongly recommended that you go for testing and follow up with a health professional,” says Aletha Maybank, MD, a board certified doctor in pediatrics and preventive medicine and an assistant commissioner in New York City’s health department.

And, Maybank adds, Plan B should be used only as a back-up when “plan A” doesn’t work.