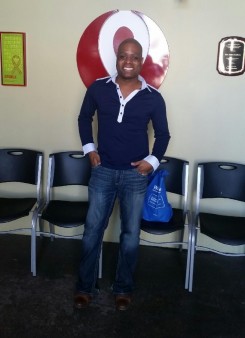 The minute I heard my boyfriend’s voice over the phone, I knew something wasn’t right. My anxiety only increased after he asked if we could meet in person.

That was the day he told me he was HIV positive. I told myself not to panic and went to get tested that same day.

Even though HIV test results are usually available the next day, the clinic I visited was having problems with its fax machine. I was on pins and needles. Regardless of the result, I just needed to know. After nearly a week, I returned to the clinic where they explained to me that I had tested positive for HIV.

I broke down crying for about 15 or 20 minutes, but then I knew I had to snap out of it and start figuring out what to do next. The clinic recommended that I get additional blood tests to determine my CD4 counts and my viral load, key metrics for understanding the nature of an HIV infection.

Now, 11 years later, I remember how I felt at the time: I was 22, and I wasn’t worried if I was going to be OK; I was worried that nobody would ever want to have sex with me again. That’s what I was worried about.

My diagnosis had a powerful impact on the way I viewed my life at the time. In an effort to cope, I started experimenting with drugs, and hanging out with a group of people who were also into that.

I guess I thought, “Whatever, I might as well just party.” It got crazy for a little bit. Then one of my friends who did drugs committed suicide, and that snapped me out of it. That was a turning point, and I decided that I was going to live differently.

I began taking a more active role in my treatment and actually began taking medication a year after being diagnosed. My doctor initially prescribed Atripla, a fixed-dose combination drug that reduces the virus’s capacity to mutate.

At the time, it was like a big, blue horse pill. I felt like the walking dead because I would take it at night and it wouldn’t wear off until 2 or 3 p.m. the next day. Fatigue is a known side effect of this drug.

Unsatisfied, I let my doctor know about my concerns, and she recommended that I try a new regimen that combined three different drugs: Reyataz, Norvir and Truvada. Since the switch, I haven’t had a single side effect. It’s really working for me.

Medication is one thing, but I also credit much of my success to the support I receive from family and friends.

I am my mother’s only child, so I’ve always been close with her and my stepfather. I remember the day I told them there was a possibility I could test positive. I got my mom some pamphlets so she could find out more about it. I also wanted to make sure I was educated, in case she had questions. I had already made peace with it, so I told her not to worry because I wasn’t worried. She seemed relieved and said, “OK, if you’re not going to worry, then I won’t worry.” At that point, she could just be supportive.

My uncle also played a key role, letting me know that outcomes for people diagnosed with HIV had improved a lot, and the most important thing for me to do was find a good doctor and take responsibility of my health.

My friends were also supportive. They were always there for me, and they’re willing to talk if I needed to get things out, which I did. Now, I am happy and legally married to my longtime partner, David, who is HIV-negative. I’ve known him for 17 years and we’ve been together for almost six. He adopted two boys, so I’ve had to play a parental role. It’s one of the things I always wanted: to have that family connection and find out what it’s all about.

Having received so much support myself, another thing that is important to me is giving back to others. I found a way to do this through a nonprofit organization called Positive Directions, where I now work as a prevention coordinator to help offer social and supportive services to those living with HIV.

The most important thing is just knowing your status. A lot of people resist testing because they’re afraid to find out, but that will only come back to bite you later. Every person needs to know about their health. You can get tested for free, and then you know. Positive or negative, it can bring you peace of mind.

What three adjectives best describe you?
Outgoing, charismatic and optimistic

What is your greatest regret?
No regrets. I am who I am because of my past.

What keeps you up at night?
My wheels spin every night, thinking of what I can do the next day to make a difference.

If you could change one thing about living with HIV, what would it be?
I’m not sure what I would change. I have been blessed with being healthy. I would say I wish I had been able to inspire others a lot earlier.

What is the best advice you ever received?
Love yourself! Don’t ever let anyone tell you what your worth is! I love you and others love you. Do not ever forget that. I’m not living with HIV. HIV is living with me!

What person in the HIV/AIDS community do you most admire?
Pedro Zamora. Looking at him on TV at an early age really intrigued me because I didn’t know much about the disease, but I could tell he was very passionate and was a fighter!

What is your motto?
I do not live with HIV. HIV lives with me!

If you had to evacuate your house immediately, what is the one thing you would grab on the way out?
My pink Care Bear that my grandfather gave me when I was 4. I am now 33, and I still have it!

If you could be any animal, what would you be? And why?
A lion. I am a Leo and I am every bit of a Leo. I am proud and I am protective of the ones I love! I love everyone.