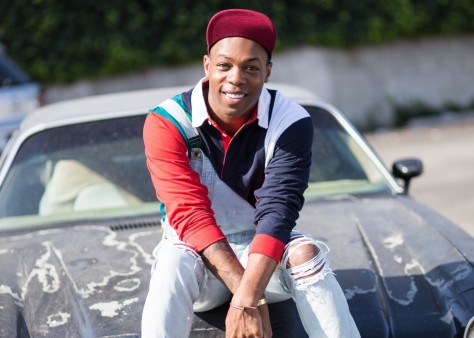 Look What You Made Todrick Hall Do … for HIV Awareness! [VIDEO]

Todrick Hall high-kicked it in Kinky Boots, belted it out on American Idol and spilled the tea on RuPaul’s Drag Race. He’s the star of his own wildly popular YouTube channel—as in nearly 2.7 million subscribers—and he can currently be seen dancing in Taylor Swift’s latest chart-topper, “Look What You Made Me Do.” Like Beyoncé, he even dropped an entire video album, Straight Outta Oz (it tells the autobiographical story of a gay Black boy leaving rural Texas for the klieg lights of Los Angeles).

But this whiz of an entertainer has the heart, courage and brains to include HIV advocacy in his journey. Working with the “Positively Fearless” campaign, sponsored by HIV med Prezcobix, he is part of a movement to address the epidemic among young gay and bisexual men in Black and Latinx communities; unlike most other population groups, these young men have seen HIV diagnosis rates rise in the past decade. While preparing for Atlanta Black Pride Weekend (August 30 to September 5), Hall spoke with POZ about his art, advocacy and what’s after Oz.

What do you have planned for this weekend’s Black Pride in Atlanta?

I’ll be performing a number with a couple of dancers. We’re gonna have a good time on stage, but most importantly, I’ll be talking about “Positively Fearless” and reaching out and being part of the community, talking to people one on one, taking photos and hopefully answering questions and bringing people to the website [PositivelyFearless.com].

Coincidentally, you’re part of a major pop culture moment right now, as a dancer in Taylor Swift’s “Look What You Made Me Do” video and as a member of her infamous squad of besties. Does the topic of HIV and your advocacy ever come up with your friends?

Yeah, I went to a VMAs [Video Music Awards] party the other day, and we had a huge discussion about it because I was telling them I was doing Black Gay Pride in Atlanta. So yes, it is something we talk about, and that’s why I love the people I’m friends with. They know I love to get into deep conversations about the big issues.

You grew up in rural Texas. How did you first learn about HIV?

I have a close relative who was diagnosed with HIV, and my family was very scared of it. This was in the ’90s, and times were very different. That was my first interaction with HIV and also [my first memory] of being afraid and being taught to be afraid. I remember there was a moment when a sucker was being given to a younger kid in our house, and everyone was freaking out that that could be a way of contracting the virus. I truly believed that [to be possible] until a lot later in life when I was training for Broadway and met a lot of people who are HIV positive. I was able to learn a lot from them about the virus.

I got most of my education when I fell in love with somebody who was HIV positive. It really inspired me to do a lot of research and pick up books and pamphlets. But I didn’t really have a specific place to go. I wish I’d known a Positively Fearless at that moment because there was a lot of literature but not a lot that specifically spoke to my community, being an African-American gay man. I then went on to date another person who was HIV positive. I just thought, These stigmas need to be crushed and completely done away with.

When I was Lola in Kinky Boots, we did a lot of fundraising for Broadway Cares/Equity Fights AIDS [which raises money for numerous HIV causes]. Even though I thought I was educated about HIV, I didn’t know how huge a plague it was until I watched the documentary How to Survive a Plague on Netflix, and I learned all about ACT UP and Peter Staley—I befriended him on Facebook. I’m obsessed with him. Such a hero. It just opened my eyes so much. So I’m constantly learning every day. It’s like fine-tuning your craft if you’re a performer. You never stop learning new things. It’s important to continually research and find out new statistics and new things you can do to help your friends who are HIV positive or help yourself stay negative.

Why do you think it’s so important to have HIV information presented in ways specific to Black gay men?

It’s so important. While other communities have become better and progressed [in terms of HIV rates], we have consistently been getting hit so hard with the virus, and we are not able to get information to the people. [Editor’s note: According to the “Positively Fearless” campaign, if current HIV rates continue, one out of every two Black gay men is expected to become HIV positive. For more, see the video below.] I don’t know what the missing link is, but I’m hoping I can be a part of the solution. In the culture I grew up in, it was a very hush-hush situation. If you get HIV, you don’t tell anyone—you don’t even acknowledge it yourself, and you hope it goes away. And that’s not going to help people who are HIV positive or their loved ones who want them to be around and live a happy life. I definitely think that it’s a huge issue, and that’s why when I found about “Positively Fearless” I couldn’t wait to jump on board.

From your experience, is the Black community becoming more comfortable discussing the topic of HIV?

Yes, and I say that with the most confidence I’ve ever said it. But there is still a huge stigma. I know people who are African American and HIV positive, and I know for a fact that they are not taking their medication on a regular basis—sometimes because they’re humiliated to even go to the doctor. But there are other ways to get the medication, and if they had the information, they’d probably use it. And if the conversations were happening more often, then they’d probably feel more comfortable. So this campaign and this movement are very informative.

Have you ever addressed HIV in your music and art?

I don’t think I’ve touched on this subject in my music. My own album [the video album Straight Outta Oz, see below] was about my life story up until I moved to Los Angeles, so I wasn’t really exposed to HIV romantically until that point. But it’s something I’d love to tackle for my next project.

I was blown away by Straight Outta Oz and was excited to see that you added more songs and videos, featuring RuPaul and a slew of cameos. What’s next for that project and others you’re working on?

We’re touring from the end of March through June of next year. And I’m talking to producers to bring Oz to Broadway; I just want to make sure if it’s done, it tells my story well. And the story of a gay Black man coming out in Texas—even though it doesn’t have an HIV component to it—has a lot of the shame and the telling you to hide and not be who you are.

I’m currently working on a new album and want to touch on a lot of things that troubled me in the gay community and politics in general. I could have written an album of songs about people with big booties dancing in the club or taking shots—and no shade, because I love those types of songs too—but I was really inspired to hopefully tell a story that would change people’s lives. That’s more my mission now. Making great music that’s entertaining and fun and you can dance to but also has a really good message that’s not super cheesy.

Please tell us you’re filming a video album for that one too!

Well, now I can’t tell you too much, darling, but I’ve got something up my sleeve.

To read a POZ interview with “Queer Eye” star Jai Rodriguez, who is the Positively Fearless spokesperson for Latino gay and bi men, click “Sex Tips From a Gay Man, Indeed!” Below are more of Todrick’s YouTube hits: