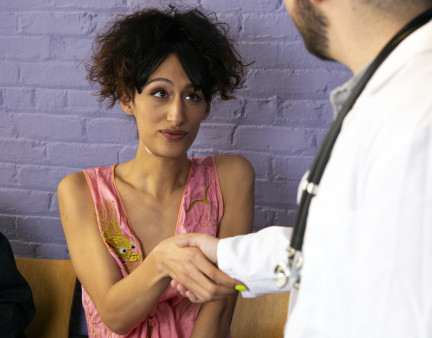 Apretude for HIV prevention is as effective for trans women as it is for gay men, with no adverse effects on hormone therapy.

Long-acting injectable pre-exposure prophylaxis (PrEP) works just as well for transgender women as it does for gay and bisexual men, with no adverse interactions with gender-affirming hormone therapy, according to new research presented at the 24th International AIDS Conference in Montreal.

The study, led by Beatriz Grinzstejn, MD, PhD, of the STD/AIDS Clinical Research Laboratory at the Instituto Nacional de Infectologicia in Brazil, is another glowing endorsement of injectable cabotegravir’s prevention potential. In equally sized groups that were prescribed the two forms of PrEP, seven women taking daily pills acquired HIV, compared with just two women who received the injections.

This analysis reaffirms prior results from the HPTN 083 trial showing that extended-release cabotegravir prevents more new cases of HIV than daily PrEP pills. The injections were as effective for trans women as they were for the study population as a whole, which mostly consisted of men who have sex with men.

Transgender, gender-nonconforming and nonbinary people face heightened risk for HIV. A 2019 analysis found that an estimated 15% of trans women in the United States are living with HIV. Black and Latina trans women have even higher HIV rates. Transgender people often face stigma and discrimination, which contribute to higher levels of unemployment, poverty, homelessness, sex work, mental health issues, substance use, incarceration and violence, all of which are linked to higher risk for HIV.

Yet only about one third of HIV-negative transgender women have used PrEP, according to the Centers for Disease Control and Prevention. Injectable PrEP is especially recommended for people who might have trouble taking daily pills regularly, such as those without stable housing or those who might want a more discreet prevention method.

Grinzstejn’s analysis was part of the larger HPTN 083 study, which evaluated long-acting cabotegravir injections in men who have sex with men and transgender women. It was conducted in the United States, Argentina, Brazil, Peru, South Africa, Thailand and Vietnam.

Overall, the study included 4,566 participants, 570 of whom were trans women and 3,996 of whom were men who have sex with men. The trans women were younger than the gay and bisexual men: 83% of them were between ages 18 and 30.

The study participants were split into two groups that were randomly assigned to take daily PrEP pills or receive cabotegravir injections administered by a health care provider every two months.

Over half of the transgender women were already taking gender-affirming hormone therapy or started it during the study. The most popular was estradiol valerate, but some used other forms of estradiol. About one quarter used cyproterone acetate plus ethinylestradiol, and about a third used spironolactone, an androgen blocker.

Cabotegravir concentrations over time remained comparable between trans women who did and did not use hormone therapy. Long-acting cabotegravir was found to be safe and well tolerated for trans women, as it was for the study population as a whole, though mild to moderate injection site reactions were common.

This finding is reassuring because studies have shown that transgender women are more likely to take PrEP if they are sure that gender-affirming hormones do not reduce its efficacy and, conversely, that PrEP does not interfere with hormone therapy. Dispelling the myth that hormone therapy makes PrEP ineffective or vice versa can increase PrEP use and prevent HIV.

But the news was not all good. Alarmingly, the researchers found that transgender women enrolled in the study reported higher levels of emotional abuse (47%), sexual abuse (57%) and physical violence (30%) than men who have sex with men, who themselves had high rates of abuse.

The study also found that more trans women than gay and bisexual men perceived their HIV risk to be low (44% versus 33%, respectively), despite the fact that they are more vulnerable to HIV than the general population. However, their high rate of other sexually transmitted infections, including chlamydia, gonorrhea and syphilis, demonstrated that they were at elevated risk for HIV.

This low perception of risk among transgender women compared to actual vulnerability mirrors previous studies. But this research shows that they might benefit more than they think from HIV prevention medications.