More treatment options may soon become available for those with hepatocellular carcinoma (HCC), which is often diagnosed late.

A new type of treatment that helps the immune system fight cancer reduced the size of liver tumors in a subset of people with hepatocellular carcinoma (HCC), which can result from hepatitis B or C, according to a study presented at the American Society of Clinical Oncology (ASCO) annual meeting this week in Chicago.

More than half of liver cancer patients who received first-time treatment using the checkpoint inhibitor Opdivo (nivolumab) were still alive at 18 months. A related drug, Imfinzi (durvalumab), also looks promising at an earlier stage of testing, while preliminary findings from a third study suggest that combining two different types of immunotherapy may improve effectiveness.

Over years or decades, chronic hepatitis B or C, heavy alcohol use and other causes of liver injury can lead to development of liver cirrhosis and hepatocellular carcinoma, a type of primary liver cancer. People with hepatitis C remain at risk for HCC even after being cured with antiviral therapy.

HCC is often detected late and is difficult to treat. The only FDA-approved first-line treatment, the kinase inhibitor Nexavar (sorafenib), doesn’t work for many people with HCC, and most will experience disease progression. A similar drug, Stivarga (regorafenib), which was recently approved for second-line HCC treatment after Nexavar, offers a median survival duration of about 11 months. Several other experimental liver cancer therapies have failed in clinical trials.

Opdivo is a monoclonal antibody that blocks the PD-1 receptor (an immune “checkpoint”) on T-cells, the main soldiers of the immune system. PD-1 plays a role in regulating immune function. Some tumors can hijack PD-1 to turn off immune responses. Drugs that block PD-1 can release the brakes and restore T-cell activity against cancer cells. Opdivo is currently approved for several types of cancer, including advanced lung, kidney and bladder cancer.

PD-1 checkpoint inhibitors work best against a small subset of tumors that are “hot,” or inflamed, allowing T-cells to enter. So-called cold tumors do not attract immune cells. Liver tumors are more likely than many other types to be immunogenic (meaning that they trigger an immune response) and are therefore good candidates for this type of treatment, Anthony El-Khoueiry, MD, of the University of Southern California, explained in an ASCO overview of immunotherapy for liver cancer. 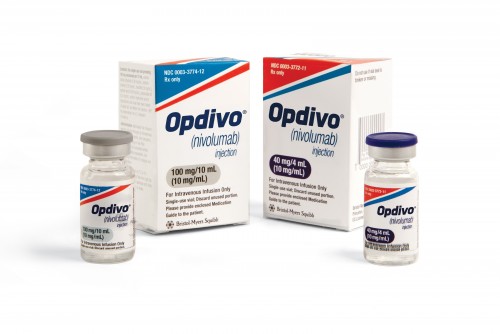 El-Khoueiry was part of a team that tested Opdivo for liver cancer in the CheckMate 040 study. This Phase I/II trial enrolled 262 people with advanced HCC who couldn’t be cured by surgery to remove tumors. A cohort of 48 patients first participated in a dose-escalation phase, testing IV infusions of 0.1 to 10 milligrams/kilogram every two weeks. The 3 mg/kg dose was chosen, and 214 more people were enrolled. Participants were followed for a median of about 15 months; tumor scans were done every six weeks.

As the researchers reported recently in The Lancet, the overall objective response rate—a combined measure of complete response (tumor disappearance) and partial response (30 percent shrinkage)—was 15 percent in the dose-escalation cohort and 20 percent in the expanded cohort using the selected dose. At ASCO, they presented the data broken down by whether participants had previously used Nexavar (182 people) or not (80 people).

Early treatment outcomes were generally similar in the two groups, but people who had not tried Nexavar seemed to have better long-term outcomes.

Just over half in both groups showed some degree of disease control. Complete response was rare regardless of prior treatment (about 1 percent). Partial response was seen in 19 percent of the Nexavar group and about 14 percent of the non-Nexavar group, while 34 percent and about 40 percent, respectively, had stable disease. Whether patients had viral hepatitis did not appear to affect response rates.

The median duration of response was about 17 months in both groups. But 18 months after starting Opdivo, 57 percent of people who had never taken Nexavar were still alive, compared with about 44 percent of those who had done so.

Treatment was generally safe and well tolerated, with no unexpected side effects. The major concern with checkpoint inhibitors like Opdivo is immune-related adverse events. These drugs work by restoring immune responses against cancer cells, but they can also take the brakes off the immune system more broadly, leading to excess inflammation of healthy tissue. Severe adverse events were uncommon in this study (1 percent or less), but up to 9 percent had seriously elevated liver enzymes. One patient died of pneumonitis, or lung inflammation.

“Durable objective responses show the potential of nivolumab for treatment of advanced hepatocellular carcinoma,” the researchers concluded in their report in The Lancet.

In another presentation at ASCO, Zev Wainberg, MD, of the David Geffen School of Medicine in Los Angeles looked at Imfinzi as a treatment for liver cancer. While Opdivo interferes with immune regulation by attaching to the PD-1 receptor on T-cells, Imfinzi attaches to its ligand, or binding partner, called PD-L1, on tumor cells. Imfinzi is currently approved for advanced bladder cancer.

A Phase I/II trial tested Imfinzi in people with 15 kinds of solid tumors who did not respond to or could not tolerate standard first-line therapies. They were treated with IV infusions of 10 mg/kg every two weeks for up to a year.

The liver cancer cohort included 40 people who mostly had advanced HCC and had previously tried Nexavar. The study population was generally similar to the one in CheckMate 040. Ten of them had hepatitis B, and eight had hepatitis C.

After two years of follow-up, the overall objective response rate was 10 percent, and another 23 percent had stable disease. The median survival duration was 13 months, though progression-free survival was just three months; 56 percent were still alive at one year.

People with hepatitis C (25 percent objective response) seemed to do better than those with hepatitis B (0 percent), while patients with neither virus fell in between (9 percent). But the researchers cautioned that these subgroup numbers were too small to draw any firm conclusions.

Twenty percent of participants had severe adverse events or laboratory abnormalities, most often elevated liver enzymes (up to 8 percent). The researchers did not report any severe immune-related or inflammatory events.

Finally, Robin Kate Kelley, of the University of California, San Francisco, presented early data from a small study testing a combination of Imfinzi plus a different type of immunotherapy, tremelimumab.

Tremelimumab is also a monoclonal antibody checkpoint inhibitor, but it blocks CTLA-4 instead of PD-1. CTLA-4 is another receptor on T-cells that acts as a brake on immune response, but it comes into play at a different stage of the T-cell life cycle. Recent combination immunotherapy studies for a variety of cancer types have shown that using CTLA-4 and PD-1 inhibitors together can unleash a stronger immune response against tumors, but it can also cause more severe inflammatory side effects.

Kelley’s team reported results from a planned interim safety analysis of 40 people who took both drugs in combination prior to randomization. In the Phase II portion of this trial, participants will be randomly assigned to receive Imfinzi alone, tremelimumab alone or both.

Severe adverse events and laboratory abnormalities were more common than in the study of Imfinzi alone, with 23 percent of participants having at least one. The most common were elevated liver enzymes and lipase (a pancreas enzyme ), but researchers also saw severe inflammation of the lungs, pancreas and colon (one case of each).

Bristol-Myers Squibb is also looking at a similar combination and has expanded its CheckMate 040 to test Opdivo plus Yervoy (ipilimumab), another CTL-4 checkpoint inhibitor.