Jamie Foxx at the World premiere of ’The Lion King’ held at the Dolby Theatre in Hollywood, USA on July 9, 2019. Shutterstock

The Oscar-winning actor stars in a new Stand Up To Cancer campaign aimed at educating Black and Latino people about colorectal cancer.

People of color, particularly African Americans, continue to be disproportionately affected by colorectal cancer in the United States. To help address the problem, Academy Award–winning actor Jamie Foxx teamed with Stand Up To Cancer (SU2C) and Exact Sciences to bring awareness about the disease to Black and Latino communities via a new public service campaign.

In the ads, Foxx stresses the importance of colorectal cancer screenings, early detection and prevention. The campaign was launched to coincide with Colorectal Cancer Awareness Month, which is observed every March.

“Cancer affects everyone,” Foxx said in a press release about the awareness effort. “I’ve lost good friends—young friends—to this deadly disease. We need to make sure that we are taking care of our bodies, paying attention to certain things, that you didn’t necessarily think about when you were younger.” 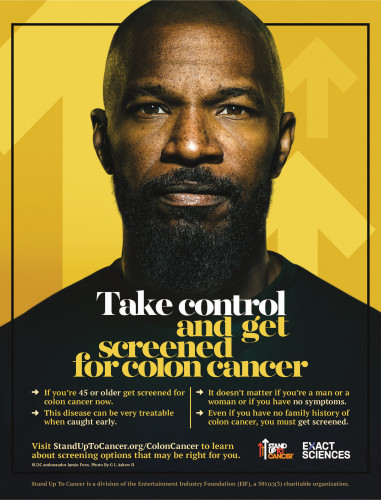 Courtesy of Stand Up To Cancer

Foxx said he is proud to help people learn about their screening options.

Findings show that Latinos have the lowest rate of colorectal cancer screenings. In addition, both Blacks and Latinos are at greater risk of being diagnosed with the disease at a later stage, when the disease is more difficult to treat.

Produced in both English and Spanish, the campaign will be distributed via print, broadcast, radio, digital and other outlets.

Sung Poblete, PhD, RN, CEO of SU2C, said the organization is especially grateful to have Foxx as a spokesperson considering that screenings have dropped sharply as a result of COVID-19, which, according to Poblete, “compounds an already significant screening disparity in minority communities.

“With routine screening, colorectal cancer is one of the most preventable cancers,” Poblete added. “It’s beatable in 90% of cases when detected early, and lives can be saved with just one simple step. People must get screened!”

In addition to the campaign, a $10 million grant from Exact Sciences will help SU2C launch a team of colorectal cancer researchers to determine the needs of medically underserved communities and offer free colorectal testing. These experts will also assess fecal DNA and blood samples gathered from appropriate exams for colorectal cancer, such as colonoscopy, CT colonography, flexible sigmoidoscopy and at-home stool tests.

Ultimately, the investigators’ goal is to find better ways to stop colorectal cancer.

For related coverage, read “Cedric the Entertainer Wants You to Know More About Cancer Clinical Trials.”