The Ironman On Kidney Dialysis

Athlete Shad Ireland isn’t African American, but the disease that he defied by tackling the Ironman Triathlon is one that disproportionately affects Black folks.

On July 25, 2004, Shad Ireland swam almost 2.5 miles, biked 112 miles and capped the day by running a marathon, a distance of 26.2 miles. Ireland wasn’t the first athlete to participate in a triathlon, but he was the first and only kidney dialysis patient in the world to compete in and complete the grueling race, considered one of the hardest one-day sporting events in the world.

But let’s backtrack. Ireland was born with healthy kidneys. By age 11, however, doctors diagnosed his organs as diseased. While waiting for a kidney transplant, Ireland started dialysis. At age 18, he underwent his first transplant, receiving two kidneys. The organs lasted for three years until his body began to reject them. A second transplant was unsuccessful, forcing Ireland to continue dialysis. Then, in 1993, he saw a triathlon on television. Ireland weighed just about 75 pounds, but the determination and strength of the participants inspired him. He wanted to compete in this race, so, at age 31, he announced his decision to do just that; at age 32, he actually did it.

His successful completion of the race, says Ireland, convinced him to help others by showing them “that an individual inspired can accomplish anything.” 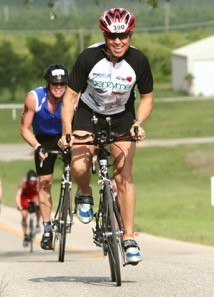 Courtesy of the Shad Ireland Foundation

What’s the key message you want people to get from your personal experience with kidney disease?

I’m interested in kidney disease and its leading causes because I’ve been on kidney dialysis for 29 years. I am the first dialysis patient in the world who ever competed in a complete Ironman. I’ve done 20 triathlons now, at all distances. I rode my bike across the United States in 2009. I rode 4,700 miles in three months. And I’ve done all of this to raise the level of awareness and education about the leading causes of kidney disease, specifically targeting underserved communities and communities of color—African Americans, Latinos, Asian Americans—they’re all disproportionately affected by kidney disease. But African Americans and Latinos are four times more likely to develop renal disease and nine times less likely to be diagnosed at a point where prevention can really make a viable impact. And that’s very important.

I find it offensive that we’re a sports- and entertainment-based society and we sell so many products to the African-American community to the tune of billions and billions of dollars a year. Yet we struggle with delivering education and prevention information, and we struggle with providing access to health care.

I think in the past we’ve tried to tell people what to do. But I think we have to engage them where they’re at. We have to bring them to that come-to-Jesus moment where they realize that they may have one or two of the leading causes of kidney disease. We have to get them to ask themselves the question, OK, what do I do next? And that’s where the technology allows them to do that, [by offering people access to education, awareness and empowerment]. We believe in the model of using athletes to provide inspiration. Athletes have the ability to dynamically change the communities that they serve just because of who they are and what they do.

So if we can provide an inspirational model that engages people where they’re at and then give them the tools and the resources to be able to change their lives, then I think we’ve created a systemic change there. I think that’s a win-win for everybody.

What is the message you want to publicize about kidney disease and obesity?

Well, first and foremost, I’m trying as hard as I can to get the word out to underserved communities and communities of color, because they’re disproportionately affected by these illnesses. I’m trying to inspire people. I believe that we have the ability to inspire others by what inspires us. So I want to ask people the question: What inspires you?

For example, I’m inspired by cycling, by triathlons and by the dreams that I have. If we’re talking specifically to those who are facing challenges, I would like them to know that they can reach and hope, that if they believe in possibilities, amazing things can happen. You know, you have to want your situation to improve, and you have to believe that your situation can improve. And if you can engage those two concepts, you can do anything you set your mind to.

The best way I can be an advocate is to keep people from becoming a patient like myself. That’s why I’m so focused on prevention and why I’m so driven to deliver that message in underserved communities and communities of color, because they don’t have to end up like me. According to statistics, 1 in 10 American adults, or more than 20 million people, have some level of chronic kidney disease. A healthy lifestyle, however, can make a difference against obesity, high blood pressure and diabetes. The bad news is, these diseases are having a terrible effect on our society. But there is good news: These illnesses can be prevented. Do you know that if you just ride a bicycle for a half hour, three days a week, within a year you can lose 60 pounds? Little things like this can slow or stem the tide of kidney disease.

When you’re training or you’re actively engaged in participating in a competition, how do you handle your kidney disease treatment regimen?

As a dialysis patient, if it weren’t for the quality of medical care that I get, I couldn’t do what I’ve achieved. Home therapy allows individuals like me to manage kidney disease in a way that hasn’t been done before. Medical technology has improved to a point where patients can successfully live with this disease.

When I’m at home, I’m able to connect to a dialysis machine for four and a half hours. I have the flexibility and the freedom to be able to adjust my dialysis schedule around my life. Dialysis is one of the hardest things that I’ve ever done. I constantly have toxins that build up in my body. This means if I don’t do dialysis, in two weeks I’m dead. That’s the reality of my existence.

But I’m not going to let dialysis run my life. The two work in conjunction. Medical consensus said that I couldn’t compete in the triathlon, but I did it. People said I couldn’t participate in that event a second time, and I went out and I did five races the following year. What allowed me to compete in that event was following a program of nutrition, exercise and first-line therapy and medication.

The other issue with kidney disease is that its effects on the health care system are staggering. Dialysis patients tend to be hospitalized four to six times each year. The biggest expense in this country for Medicare to provide for dialysis patients is hospitalization. I’ve been hospitalized only twice in nine years. That’s because I exercise; I eat healthy foods; and my therapy is good.

I am so outside the norm, and this excites me, because I think that we can deliver the same program to the population of kidney disease patients. This would save the health care system significant amounts of money while allowing these patients to return to being productive, healthy and valuable members of society.

Where in the community can people find model health care programs, like the one that’s helped you achieve so much?

Kidney disease and its leading causes—diabetes and high blood pressure—are destroying our community. If anybody who reads this or hears this message, has any one of those leading causes or it’s affecting their friends, family, there’s an inexpensive exam called the GFR, or glomerular filtration rate test, that they can get done. All they have to do is go to the doc. The test tells if your kidneys are functioning properly. And if they’re not, doctors can catch the problem early enough to arrest the progression of this disease.

This means that, unlike me, they don’t have to end up on dialysis. But if they do, they can still live an amazing life.