Incarceration does more than force female prisoners to serve time behind bars. It also damages their physical health and mental well-being. 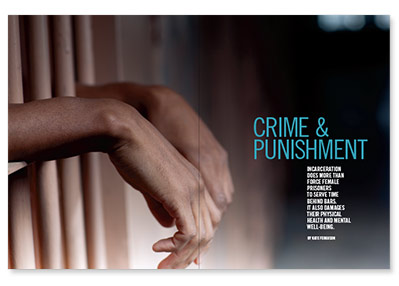 During a little more than 14 years in prison, Laura Whitehorn witnessed firsthand how prison conditions can wreak havoc with a woman’s health. Whitehorn was arrested when she was 40; subsequently, she was moved all over the country, spending time in almost half a dozen U.S. correctional facilities, including a federal institution in Lexington, Kentucky. While incarcerated she reached the conclusion that the term “prison health care” is an oxymoron. “There’s no such thing as health care in prison,” she says. “It’s basically whatever [prisons] can provide without, in their eyes, jeopardizing their own security.”

When Whitehorn was incarcerated at a prison in Dublin, California, a friend of hers at the facility developed lung cancer and wasn’t diagnosed for a very long time. “Every time she would have these terrible coughs, she would go to sick call and they would give her cough medicine or some kind of cold remedy,” Whitehorn says. “They would say she had the flu and never did any further investigation until her illness was so far along that there was really no hope of a cure, or even any hope of extending her life. She had to get chemotherapy every day, and every time she was taken out of lockup, she was strip-searched and had to put on a different uniform to go out. She’d be shackled hand and foot, driven out, brought back and stripped and searched again. Meanwhile, the whole time she’s completely ill and vomiting and can’t eat. This treatment made the condition much harder to heal.”

Where gender and race converge is reflected in a report by Beth Richie, PhD, a professor at the University of Illinois at Chicago, that explores the link between violence against women and women’s involvement in illegal activity. Richie’s research documents how the escalating incarceration rates of black women are related to issues of domestic or intimate violence, sexual assault, sexual harassment, stalking and sexual exploitation. “Until now, violence against women of color and against women in low-income communities and their involvement in illegal activity have been considered independently,” Richie wrote. She added that few researchers have explored how these two topics are related.

But there are links. Many women who enter the prison system are survivors of sexual or physical abuse. While incarcerated, they’re placed in a situation that can recall that previous abuse. Prisons are typified by an intrinsic power imbalance between inmates and guards. Some prison guards apply direct and indirect physical force against the women, including “rape and other sexual assault, sexual extortion and groping during body searches,” according to Amnesty International USA, a human rights organization. What’s more, women who report or complain about the harassment and assaults may face further humiliation and abuse by correctional officials seeking revenge.

“There are all forms of sexual abuse that go on in women’s prisons because whenever you have men, many of whom are not particularly well-trained, who are in a position of power over women, there’s a barter system that goes on,” Whitehorn says. “There’s a lot of enforced sexual contact that isn’t penetration—I also know about cases where women were forced to reveal their bodies to the male guards.”

But the sexual abuse often goes much further. “I remember that in Michigan a few years ago, there was a huge spate of prison rapes of the women by the guards,” Whitehorn says. “It’s a matter of the power dynamic in the [guard-inmate] relationship. Even in city jails, a lot of times women who have no way of getting things, like cigarettes—when it was still permitted to smoke in prisons—women would trade sex for cigarettes from guards. And drugs, that’s the biggest thing; guards would bring in drugs in exchange for sex.”

Sexual and reproductive health issues play a major role in incarcerated women’s and girls’ lives. Behind bars these issues are often ignored or attended to in insensitive, insulting ways that can harm women’s physical and mental health. “There’s a lot of stress for pregnant women, and that creates health problems in the future for their bodies,” Whitehorn says. “Then, there’s the fact that there’s no respect for when women are having their periods, when they might need some extra food or some extra care or something. In most places, you have to go to a guard to ask for a sanitary napkin. In some places, women have to turn in a dirty napkin to get a clean one, so the whole cycle of being a woman is turned into cause for shame and suffering.”

Women with fibroids have an especially tough time. If there is poor patient advocacy, women in jail are often subject to unnecessary hysterectomies for fibroid conditions. “I went through that process,” White-horn says. “I had pretty serious fibroids, and they wanted to do a hysterectomy on me. But because I had so many resources and friends on the street who did research for me, I found out there was a way of removing my fibroids microscopically without doing a hysterectomy. Someone I didn’t know but heard about had a similar situation in prison, and they did a hysterectomy on her. She was just 30.”

An acquaintance of Whitehorn’s, Mercedes Smith, a 48-year-old mother of four, served 20 years in the Bedford Hills Correctional Facil-ity in New York State. When she was first incarcerated, Smith was pregnant with her youngest son, Kadeem. After Smith went into labor, officers transported her out of the facility in shackles on the ride from jail to the hospital. Only when she got to the medical facility, did police unshackle her. Still, they snapped handcuffs onto her wrists and attached the metal bracelets to a bed rail. That’s the condition in which she gave birth to her son. Like many pregnant women at such a critical time in the delivery process, Smith was in excruciating pain. She couldn’t understand why police thought it was necessary to keep her restrained and where they thought she was going in so much pain. But Smith is not alone. For hundreds of pregnant women who give birth in jail each year, this treatment is routine.

Today, in the United States, 32 states still reserve the right to shackle pregnant women to their hospital beds during delivery. The inhumane practice goes against federal law that says shackling is unconstitutional, but states follow their own laws—and officers sometimes ignore even the state laws forbidding shackling.

Smith is an outreach specialist for WORTH (Women On The Rise Telling HerStory), an association of formerly incarcerated women who are actively working to change policies and laws that affect the health of women in prison; they hope to eliminate the obstacles inside and outside jails that impede prisoners’ access to medical care and services that keep them and their families healthy.

Tina Reynolds, WORTH’s cofounder, also went into labor while she was incarcerated. She was shackled and handcuffed—and her shackled feet were only set free moments before she gave birth to her son in the hospital. “After I gave birth to him, the shackles went back on and the handcuffs stayed on while I held my son to my chest,” she recalls.

But Reynolds had a bittersweet moment years later when, in 2009, because of her efforts and those of the other women at WORTH, she saw New York become the seventh state to limit the shackling of incarcerated women during the birth and delivery of their children. There’s much more to be done, however, to make facilities accountable for the overall health of female inmates.