Ron-Ella McLendon underwent a hysterectomy after doctors insisted the operation would solve her fibroid problems. It didn’t.

Ron-Ella McLendon first experienced menstrual cycle difficulties while she was in high school. “I was going through three to four pads each hour, and I used to pass out a lot in school,” recalls the government contractor, life coach and author, age 43. “Doctors would tell me that my iron was low. I was taking four iron pills per day, but I really didn’t know what the real issue was except that my cycles were heavy. Sometimes, I couldn’t get out of bed, and I would mess up my sheets. My first two days were the worst and really painful.”

In McLendon’s family circles, the health condition wasn’t discussed much. “I’d heard of fibroids, but I never knew in depth what they were,” she says. “Talking about it was kind of taboo.”

At age 17, McLendon became pregnant and was diagnosed with fibroids and endometriosis—another uterine condition with similar symptoms. “The doctors told me I had four fibroids of different sizes sitting on the outside of my uterus,” she says. “But they didn’t say anything else about it. They didn’t tell me fibroids might be the reason why I bled so heavily during my cycles or experienced an iron deficiency.”

As many as 80% of women experience fibroids by age 50, and Black women are three times more likely to develop uterine fibroids than their white counterparts. Race is a risk factor for uterine fibroids, but it is unclear why.

Typically, women are diagnosed with these noncancerous tumors in their early 20s or 30s, but uterine fibroids tend to develop at an earlier age in Black women.

During a second pregnancy two years later McLendon experienced more issues. “When I went into labor with my son, they told me that I needed to have a blood transfusion or one of us would not make it through the delivery,” McLendon says.

After giving birth, McLendon resumed managing her fibroid symptoms nonmedically. “I just navigated through my cycles: down for the first couple of days, bleeding like crazy, wearing two or three pairs of pants at a time, taking Tylenol or Motrin and taking the iron pills, which made me constipated,” she says. “I was really just trying to manage the best way that I knew how.”

McLendon’s life was now completely ruled by her fibroids. Her daily existence played out like a recurring nightmare. Heavy bleeding precipitated the start of a predictable fatigue that often led to scary episodes of syncope, or fainting.

Drained of energy and with pains shooting through her stomach, McLendon was afraid to go anywhere or do much of anything. “I couldn’t get out of bed. I couldn’t participate in my kids’ extracurricular activities because I’d just always be so tired,” she says.

On the rare occasions she was able to escape this maddening merry-go-round long enough to get dressed and leave her house, she’d end up bleeding through her clothes. “So now I’d have to go back in the house and change,” she says.

“You become mentally exhausted,” McLendon continues. “If I was going to be on my cycle, there were certain things I wouldn’t or couldn’t do, or I’d have to wait. I would have to plan for probably 10 or 15 days, so I really didn’t have that much time within a month to get anything done. This meant I couldn’t go on vacations, or they had to be planned around my cycle because I was in pain, tired or bleeding. I just didn’t want to do anything!”

As the years rolled by, McLendon figured she’d learned to live with her monster. But her doctors suggested she consider a hysterectomy.

“They kept pushing for this procedure, so I began thinking that this is what I needed to do in order to remedy my situation and get rid of the bleeding and tiredness and everything else,” she says. “They didn’t tell me I had any other options. It was like this hysterectomy was going to fix everything and change my entire life.”

Each year in the United States, doctors perform about 300,000 hysterectomies on women with uterine fibroids. The surgery, which entails the removal of part or all of the uterus, is one of the most prevalent among adult women and the second most common operation among women of childbearing age. It is also considered by some physicians to be a cure for uterine fibroids. But women who wish to one day have kids prefer options that won’t compromise their fertility and overall well-being.

Married at the time, McLendon worried that the hysterectomy would render her infertile. Another blow swiftly followed.

McLendon filed for divorce. Once she started dating again, scars no one could see or feel colored her world. “I just went through a whole lot mentally,” she says.

But her ordeal was far from over.

“Patients seeking information about fibroid treatment other than removing their uterus tell us that they have received little if any information on hysterectomy alternatives and the risks that a major surgery poses,” says Yan Katsnelson, MD, founder of Fibroid Fighters Foundation, an advocacy group dedicated to educating the public about the impact of fibroid disease and safe and effective minimally invasive treatments for the condition.

McLendon experienced a life-threatening complication as a result of this major surgery. “When I had the hysterectomy, they accidentally nicked my intestines during the procedure,” she says.

For 18 months after the surgery, McLendon was unable to have a normal bowel movement. After numerous visits to the emergency room and being told she had a stomach virus, she eventually became really sick and “vomited in the middle of the emergency room floor,” McClendon says.

Later, she filed a lawsuit due to the medical error, which had caused severe bloating and backed up her bowels, poisoning her system.

“I ended up on life support for a week,” she says.

After that, doctors attempted a surgical repair of McLendon’s intestines. The operation failed. McLendon sustained damage to her liver and kidney and eventually developed a hernia. What’s more, surgeons scratched her esophagus during the procedure.

“A two-hour surgery turned into four hours where I had to be resuscitated,” she says. “Doctors told my parents that I had died three times.”

McLendon’s problems with hernias continued. She eventually underwent 11 abdominal surgeries over a period of eight years to address the problems. “Ultimately, I lost my navel and now I have a scar from hip to hip as if someone sawed me in half,” she says. “I don’t have any feeling in my stomach area anymore.”

In 2017, McLendon became certified as a life coach and adopted the business moniker Coach Ella Destiny

All the health problems she had experienced motivated her to help others facing adversity. Three years later, she received an invitation to an event sponsored by USA Fibroid Centers, a national network of fibroid centers that specialize in uterine fibroid embolization (UFE). The meeting further stoked her desire to share her fibroid journey with other women.

“I became a brand ambassador for the organization to talk to women about uterine fibroid embolization,” she says.

I tell women to do research and ask questions if they’re  having heavy cycles, painful sex, and anemia because all of those things are signs and symptoms of fibroids.

At the event, McLendon learned all about UFE, a noninvasive treatment that shrinks fibroids. “It’s completely different from a hysterectomy,” she says. “At that moment, I felt like it was my mission to partner with them so I could help other women avoid what I went through. I wanted women to know that there are other options out there and that you don’t have to have a hysterectomy if it’s not medically necessary.”

But as she learned about UFE at the event, McLendon also awakened to an unsettling realization.

“Women settle for what doctors tell us because they’re doctors,” she says. “We’re trusting them to tell us what’s right for our bodies and so we don’t make informed decisions. When I found out about this treatment, I was really upset. I felt like, wow, maybe my life would not have been the way that it was if I had known about UFE. I probably could have had more children and my daughter would not have had to take care of me and would have gotten to enjoy her senior year.” 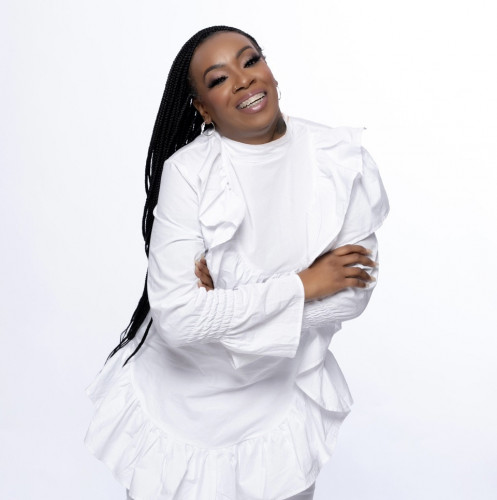 Today, McLendon’s left ovary is still intact and, having made significant changes in her life, she is remarkably upbeat. “I did have a cyst on that ovary,” she says. “But I changed my diet and went vegan. The cyst shrunk and eventually went away, so now I’m fine, and I am on a mission to help other women get to this point as well!”