Know Your Status In 8 Easy Steps 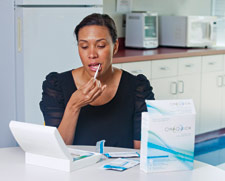 When the Food and Drug Administration (FDA) approved the OraQuick In-Home HIV test for over-the-counter sales, the news caused a big buzz. The test, available since October, makes it super easy for people to find their status—in the privacy of their homes—within just 20 minutes.

How the test works is very simple. Just swipe the absorbent pad once along your upper and lower gums to collect oral fluid. Next, stand the swab in a vial of liquid developer—the test stick holder—for 20 minutes. If one bar appears in the test stick’s window, you’re HIV negative; two means you’re HIV positive.

The big plus of this test, says Elliott Cowan, PhD, chief of the FDA’s Division of Emerging and Transfusion Transmitted Diseases, is that the test is available to many people who would not otherwise get tested. “There’s a large group of people who are infected and don’t know it,” Cowan says, referring to the one in five HIV-positive Americans  unaware of their status. “And even if they are engaged in behaviors that would put them at risk of getting HIV, they may be reluctant to visit their doctor or a health care facility where they can be tested.”

Cowan believes that the in-home HIV test will help more HIV-positive people learn their status, and, in turn, reduce transmission of the virus. (Once people know they’re living with the virus, not only can they abstain from behavior that puts others at risk—they can also start taking lifesaving meds that lower their viral load and thus make them less likely to pass along the virus.)

But other health professionals have expressed concerns about the in-home rapid test. One big uncertainty is whether those who test positive will be able to link to care and then treatment just as quickly.

“My worry is that it’s already difficult enough for newly diagnosed patients to get appointments set up with the assistance of counselors at testing centers,” says Christopher Hurt, MD, an assistant professor in the Division of Infectious Diseases at the University of North Carolina in Chapel Hill. “How can we expect people who choose to test outside of the existing system to then seamlessly enter and navigate that system on their own?”

To help ensure that people who test positive don’t fall through the cracks, Hurt suggests that at-home HIV rapid tests direct users to report their status and seek post-test counseling in person, online or by phone. This approach would also provide more accurate information about HIV incidence, Hurt says, “and enhance our ability to facilitate linkage to care.”

There’s also the price issue. Many people at greatest risk of HIV, such as young, black men who have sex with men, don’t have the resources to fork over the $39.99 many outlets are charging for the OraQuick test.

In general, Hurt believes the at-home rapid test is a good thing to help people become aware of their status. He just wants people to think hard about how to best use the test.