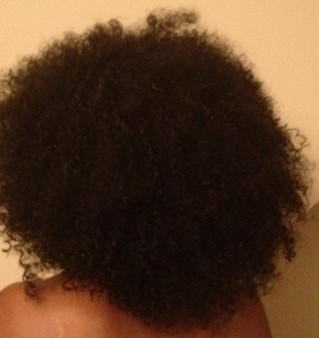 Length and texture. For years, these two words were all that mattered to me when I thought about my hair. But as opposed to what many people might think, I wasn’t a Black girl who wanted long, straight hair. I craved a head of thick, kinky curls that I could braid into fat, chunky plaits that hung past my shoulders. Once unfurled, I visualized how they would frame my face like a fierce, fluffy mane.

Alas, my hair journey to this desired destination was sidetracked by many unfortunate detours. The first occurred when I started elementary school. There, I fell victim to the myth that straight hair is more manageable myth, and my tresses suffered the first setback. I began pressing my hair. The result? The more my hair received hot comb kisses, the further away I got from my goal.

By high school, I’d graduated to wearing wigs. The length and lush volume of my childhood hair had vanished with a vengeance. What else was there to do but cover up what was left? I thought.

Then, quite by accident, I learned that my hair could bounce back. I’d been wearing a weave for several years and stopped going to the salon for servicing. I’d come to hate that long trek to the beauty parlor, where heavy-handed hairstylists would apply relaxer to my reverted roots to blend the newly straightened strands into the added hair I sported. That’s when I called it quits. I started doing my own hair and said bye-bye to chemical straighteners.

Unfortunately, right off the bat I faced a problem. I didn’t want to immediately remove the weave, so the roots would revert, and the new growth wrapped itself around the base of the weave. Despite any possible repercussions, however, I left the matter alone.

What happened next seemed like a disaster at first. When I decided to remove the sections of weaved-in hair, I realized they’d become almost permanently attached. In a panic, I applied the chemical relaxer I’d sworn off. But common sense prevailed. I left the relaxer on only long enough for my tightly curled hair to straighten enough to unwind itself from around the sewn-together base of the weaved hair (aka wefts). Then, I carefully loosened my own hair from the wefts and gently pulled them apart.

Next, to reduce damage, I rubbed oil into the areas where the hair had been attached. After that, I gingerly parted any clumped-together hair sections and combed out tangles with a wide tooth comb. To my surprise, my hair showed growth. Evidently, the years of not using a relaxer had paid off. Now, my hair was in its natural state, and I had enough length to put my hair into two thick braids, which is how I wore it from then on.

For a few years, everything was great with my hair. Then, I suffered a major setback. This time, a sign marked the disastrous detour. My sister noticed that my left eye looked slightly “pushed out.” Then, I saw another sign. When I combed my hair, strands would fall to the floor by the handful. Within a few weeks, I’d lost almost an inch off my hairline. This called for professional help. Something was terribly wrong, but I didn’t know what, so I went to the doctor.

After a brief exam, my family physician referred me to an endocrinologist. Her diagnosis floored me. She suspected I had a thyroid condition and recommended I get the gland tested. The results hit me hard. I had Graves’ disease (aka hyperthyroidism); my thyroid was overactive and producing an excessive amount of thyroid hormone. One of the symptoms was hair loss and the telltale eye bulge my sister first saw. The doc suggested radioactive iodine treatments to stop my overactive thyroid from pumping out too much hormones. She said this also meant I would have to take thyroid hormones to replace what my body would no longer make.

After I left the doctor’s office, I began to think. How could this have happened? I’d never had this problem before, and I certainly didn’t want to agree to this drastic treatment. If my thyroid was out of balance, why couldn’t the imbalance simply be corrected?

Then it hit me. I remembered using a cellulite supplement that sported a health warning. The supplement contained high amounts of iodine that could affect my thyroid. By taking the daily dosage of four capsules each day, I had flooded my system with excess iodine. No wonder I had experienced an imbalance. I researched alternative treatments that could possibly correct the problem.

When I told the endocrinologist my theory, however, she dismissed it. She insisted her solution was the best course of therapy. I told her goodbye.

Fortunately, my insistence paid off. I read that acupuncture was used to treat hyperthyroidism, so I found a licensed acupuncturist and made an appointment. It was one of the best decisions I ever made.

After six months of acupuncture treatments, my eye reverted to normal, and my hair loss abated. I was back on track with my hair growth regimen but then made a huge mistake when my hair started growing back. I allowed myself to be persuaded that slightly relaxing my hair and getting a hair system would help it grow and give me styling options while I waited to regain the length and volume I’d lost.

The premise seemed sound. The relaxer would loosen my kinks and curls and stop the strands from coiling and tangling and then breaking off when combed. In a hurry to reach my partial goal of length, I agreed.

Initially, when the shoulder-length hair system was installed, I was pleased. My hair wasn’t in its natural state, but I could live with that. Once it grew, I planned to ditch the system and resume my natural hair journey.

Unfortunately, that never happened. Instead, about one year later, my relaxed hair was a mess. When the hairstylist combed my hair, all I’d hear was snap, crackle and pop; my hair was breaking off again. That’s why one sunny summer afternoon when I sat in the salon chair being prepped for a touch-up and reinstallation, I told my stylist to put the hair unit in a bag. The relaxer was destroying my hair, and I wouldn’t be back. She mumbled apologies, dropped the hair into a bag and handed it to me. Once I left the salon, I never looked back.

Was this déjà vu? I couldn’t seem to make it past go, but I was determined to try again. But before I did anything, I sat back and reflected. There had to be a way to work with my natural hair. I’d done it before, and I could do it again. First, I had to strengthen my weakened hair, so I returned to research.

Today, the worst is over. I’ve regained most of my lost hair, and my tresses continue to grow. The lessons I learned will not be forgotten. Just like you should never let a doctor push you into a course of treatment you feel is not good for you, never let a hairstylist convince you to do anything to your hair you feel will ultimately do damage.

Simply stated, the takeaway is this: Always be assertive, and do what you feel is right for you.