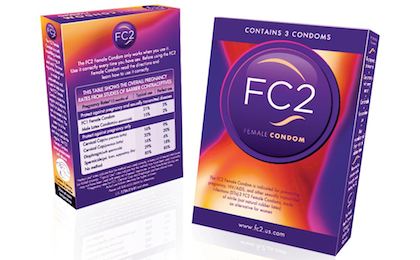 The FC2 female condoms are sold online and in stores.

Wednesday, September 16, is Global Female Condom Day (GFCD) 2015, and the world’s leading manufacturer of the product announced it has sold more than 500 million female condoms in over 144 countries since launching its product in 1995.

Based in Chicago, the Female Health Company (FHC) manufactures and markets the FC2 Female Condom, which is available in stores and online.

To honor the awareness day, FHC is sponsoring seven global events; a reception for the FC2 was held in Washington, DC, during the recent United States Conference on AIDS.

Female condoms are inserted in the vagina before sex; an inner ring on the condoms aids in insertion, while a larger, softer ring remains outside the vagina and keeps the condom in place. Like traditional condoms used by men, the FC2 helps prevent pregnancy, HIV and other sexually transmitted infections (STIs).

A box of three latex-free FC2 condoms, made of latex-free nitrile, costs $5.99 on the Female Health website.