Keesha Sharp has a message of hope for people with pancreatic cancer and she joins Jaime Camil, Cedric the Entertainer and Michael Ealy to push for diversity in cancer trials.

Actress, writer and director Keesha Sharp, known for her roles in the TV shows Lethal Weapon, Empire and The People vs. OJ Simpson as well as the feature film Marshall is awfully busy. At the moment, she’s starring in the TV movie A Christmas Surprise and preparing to direct an episode of Black Lightning.

But when the Pancreatic Cancer Collective, an initiative of the Lustgarten Foundation and Stand Up To Cancer (SU2C), asked her to participate in a public service announcement to raise awareness of pancreatic cancer research, she jumped at the chance.

The reason was her mom. “Mary was one of those people who was always doing everything for everybody, the one people called on to help them feel better,” Sharp says. She and her mom shared a passion for healthy living. “She was a health nut,” said Sharp.

Four years ago, her mom wasn’t feeling well. “She felt something wasn’t right,” recalled Sharp. Her mother’s doctor said it might just be age. “I said, ‘Go and get a different opinion.’”

She did, and that’s when she was diagnosed with early-stage pancreatic cancer. She underwent surgery within a week. The fact that it was caught at an early stage is remarkable—pancreatic cancer often has no symptoms until it’s advanced to a late stage, when it’s harder to treat. Sharp’s mom was treated with chemotherapy for a year and was cancer-free for a year after that. “But the doctor said it’s not if it comes back but when,” recalled Sharp, “and it did.”

Sharp and her brother had done research about clinical trials and had gotten their mom on a waiting list. But she didn’t get accepted into a clinical trial until she had only weeks or months to live. The trial didn’t start for several weeks. “My mom was getting weaker and weaker,” recalled Sharp. Because of COVID-19, only two people could visit her at a time—Sharp, her aunt and her brother alternated in pairs. When her mom finally started the experimental treatment, “she could feel it in her body and told me she felt it was working.” But it was already too late—"after just two sessions, she was gone,” said Sharp of her mom, who died August 8.

“Those last two years were incredibly tough,” said Sharp. “I never experienced what I experienced watching my mom pass away. It was horrible, but there is also beauty in it, leaving this painful world. My mom and I believe in God, so I knew she was going to a better place. That’s my spiritual side, and I was grateful. But my human side—the child in me—was ailing.” 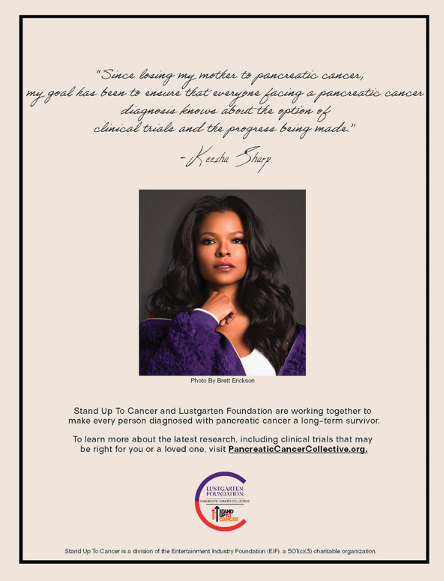 Courtesy of Stand Up To Cancer

While that clinical trial came too late to save her mother, Sharp wants to teach others about the robust research that’s now focusing on pancreatic cancer treatment. “There’s hope. Pancreatic cancer is one of those diagnoses where you think it’s over, and you wonder when you’re going to die. But there are people who have survived it. Like Bob Minetti.”

Minetti , a retired academic fundraiser from South Natick, Massachusetts, was diagnosed in 2015 but has survived in part due to a clinical trial for a novel combination of chemotherapy agents. His story is highlighted in the PSA Sharp narrated. The ad highlights the extraordinary work being done around the world that is changing prospects for many people with pancreatic cancer.

“Since the Pancreatic Cancer Collective was launched, nine world-class research teams have made great progress against pancreatic cancer,” said Sung Poblete, CEO of Stand Up To Cancer (SU2C) in a press release. The Collective, a joint initiative with SU2C and the Lustgarten Foundation, has funded more than 400 investigators from nearly 70 leading research centers in the United States and the United Kingdom. These collaborative teams have planned, started or completed nearly 36 clinical trials, the press release states, “and The Pancreatic Cancer Collective is building on this momentum to further push the boundaries of what can be accomplished.”

“It’s important to hear stories of hope,” said Sharp. “There’s more than just chemo. Sometimes that’s what you want, but there are other choices, and they have worked.”

Clinical trials are often misunderstood, she admits. In most trials, all participants get the best-in-class treatment for their cancer, and some of them also get an experimental treatment that shows promise. It’s not a situation in which one group gets just a placebo and other group gets the “real” medicine. Clinical trials are often the best opportunity for people with cancers that aren’t responding to existing treatments to get access to the best new medicines.

Misunderstanding, even mistrust, are particularly common in communities of color. “There’s some history we carry with us in the Black community,” said Sharp. “Are we going to be guinea pigs? Is this real, or are you just testing this on me?

“I would like to be able to talk to the Black community and others to let them know that clinical trials aren’t like that. They are finding what works, finding innovative incredible treatments for cancer.” She is particularly passionate about getting the word out to the Black community, which experiences a 20% higher incidence of pancreatic cancer than any other racial or ethnic group. “I want people of color to know that there are options,” she said.

Sharp isn’t the only one reaching out to communities of color to improve diversity in clinical trials. Fellow actor-ambassadors committed to that mission at Stand Up To Cancer include Jaime Camil, Cedric the Entertainer and Michael Ealy.

One Black actor Sharp knew whose life was also taken too soon by cancer is Chadwick Boseman, alongside whom she acted in the 2017 movie Marshall, about the early civil rights career of Thurgood Marshall, who would later become a Supreme Court justice. “I loved Chadwick,” said Sharp. “He passed right after my mom. He was such a kind and talented person. I loved every moment with him [making the film]. I didn’t know he was sick.” After the film came out, she would run into him “on red carpets,” and “I knew something was wrong. [I knew] if he wanted to share it he would—I didn’t want to push him, and I didn’t. He was incredibly thin. He was a completely different person. But he was still so joyful, walking around with light.”

The Pancreatic Cancer Coalition campaign will be running well into 2021, and Keesha Sharp wants to remain involved in letting Black people—and everyone else—appreciate that there is hope when it comes to treating pancreatic cancer. Said Sharp, “It’s too late for my mom, but if I can help another sister, another mom, another son, that’s what I want.”