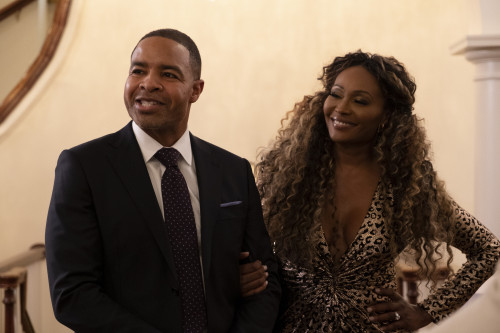 Cynthia Bailey’s recent wedding to sportscaster Mike Hill was just the latest in a series of events for the Real Housewives of Atlanta show star. This July she also participated in a fireside chat about empowering women with uterine fibroids. The virtual event was sponsored by the Black Women’s Health Imperative and Responsum Health and their community organization partners, The White Dress Project and CARE About Fibroids.

On Instagram, Bailey posted a photo showing her wearing a formfitting white dress at her wedding reception. A few years ago, she underwent uterine fibroids embolization—a minimally invasive procedure used to treat fibroid tumors of the uterus which can cause heavy menstrual bleeding, pain, and pressure on the bladder or bowel.

Several years ago, Bailey said in a blog on Bravo that wearing anything white was “very tricky.” That definitely is no longer the case!

The entry below was originally published in Bravo TV, and is reprinted with permission.

Cynthia Gets Her Healthy Back

Real Housewives of Atlanta’s Cynthia Bailey opens up about her battle with fibroids.

Hello everyone! I hope you enjoyed another drama filled episode of The Real Housewives of Atlanta. Apologies for not blogging last week. I will try to sum up the last two episodes without writing a book. I know we love our drama, but sometimes it’s nice to throw a little education and information into the mix. 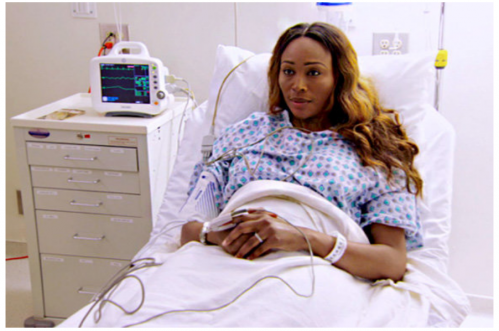 Let’s talk about fibroids! What are fibroids in the first place? Fibroids are growths (tumors) that develop from the smooth muscle layer of the uterus. They are the most common growths of the uterus and female pelvic organs. One study found that approximately 50% of women have them. Most often they are benign. Very rarely they can become cancerous (less than 0.5% of the time). Thank God!

How did the heck did I get fibroids? Doctors don’t know the cause of uterine fibroids. However, they do know that the growth of fibroids is dependent on estrogen production. This is the reason why fibroids have the potential to enlarge during pregnancy (when increased levels of estrogen are present) as well as to regress after menopause (when there are decreased levels of estrogen). They can be multiple or exist as a single large growth. They can be located on the surface of the uterus, in the wall of the uterus, or in the uterine cavity. I first found about my fibroids almost 14 years ago when I was pregnant with my daughter Noelle. At that time, other than heavy menstrual bleeding, I had no other symptoms.

What are the symptoms? Most fibroids do not cause any symptoms and many women are unaware that they have them. Of course, I was not so lucky! I had all kinds of symptoms:

Abnormal menstrual cycle: My period would show up at any time. And you guys know I don’t like surprises! Wearing white pants was very tricky because of unexpected visitors. Umm, embarrassing! Abnormally heavy menstrual bleeding: My cycle would last almost 8 days as opposed to 3 or 4 days. I was PMS-ing (the week before), then actually on my period (another week), and 1 week of normalcy before starting the whole thing all over again. I felt like my life revolved around my period. For the first time in years, we have white sheets on the bed.

Anemia: Had very low energy no matter how much sleep I got. I have been tired for the last 5 years!

Abnormally heavy menstrual periods that come more frequent than your normal cycle (less than every 28-30 days).

Pain during or after sexual intercourse: Certain positions would be very painful during sex. Good ol’ missionary position was the most comfortable.

Pressure on the bladder, which can cause frequent urination: Sometimes I felt like I had to urinate really bad, and then it would be drip, drop, drip!

Who gets fibroids? Fibroids are more common in African American women than in women of other racial groups. One study showed that fibroids are three times more common in African American women than in Caucasian women. Additionally, fibroids tend to be larger and occur at an earlier age in African Americans. It is unclear as to why such differences exists. Why I chose Dr. Lipman to help me get my life back? Dr. Lipman is a pioneer in the development of uterine fibroid embolization (UFE) and is an active participant in clinical research trials that have helped demonstrate the safety and efficacy of UFE as a treatment for uterine fibroids.

Thank you all for your well wishes and kinds words of encouragement throughout this ordeal. It has been about five months since I actually had the procedure (the recovery time was only one week), and I feel great! But this was only Step 1. I am a woman of a certain age, and I knew it was time to make a real investment in my health. This situation made me realize that I can no longer afford to take my health for granted. Step 2: I have since started on the Genovive health management program (Genovive.com). They send me my meals monthly to ensure that not only I am eating enough food a day, but also that I am eating healthy food, as well as the right proportions every day. I also work out three days a week. I have lost all the weight in my stomach area (and back! LOL!), and my clothes are sliding on with ease. I am happy, sex is great (no we didn’t hit the lottery yet, LOL!), and we are up to three times a week on a good week! I feel so blessed to have my healthy back! I don’t know about you guys, but I want to live a long and healthy life.