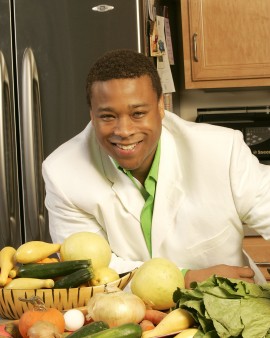 I’m better known as “the Poor Chef.” I made my name making healthy but affordable meals. I was definitely doing my celebrity chef thing when I found out I had type 2 diabetes. It’s interesting, because I’m obviously pushing health and wellness, so for me to be diagnosed with diabetes when I was trying to be a vision of health was very shocking.

Before I was diagnosed, for two or three days I was using the bathroom more often than usual. I didn’t know what was going on, so one day—it was a Saturday—I decided to go to the doctor and leave with some antibiotics or something so I could go about my business. That’s pretty much how I found out.

After my diagnosis, I learned that my aunt had diabetes. But other than that, I had no explanation for why I developed the disease. Nobody in my immediate family—my mom, dad, sisters and brothers—has diabetes.

Then, I found out developing the disease had a lot to do with my weight. I was working out a lot and getting bulky. I could have probably benefited from losing about 15 pounds instead of packing on that bulky weight. Also, my diet was not good. In addition, I was under a lot of stress, up late and working long hours. Usually, when you work long hours, you’re going to find something to snack on about 12 o’clock at night.

Eventually, the doctor suggested putting me on medication, but I didn’t go with that scenario. I didn’t even know what my numbers were or what they meant. I didn’t know what diabetes was all about. I just knew that there had to be another option, and I was going to figure out what that was.

From doing research, I learned that diabetes is a global pandemic. About 371 million people worldwide have diabetes. There are almost 30 million people living with diabetes in America alone. It’s a common cause of death, dialysis and amputations.

This disease has affected my life in so many ways. I’ve traveled from India to Jamaica to Trinidad and all over the world to try and find out why diabetes is such a pandemic. That’s when I started on my global mission to change not only my life but also anyone whose life was or is affected by diabetes.

I even created a reality TV show based on people changing their lives to better manage, or reverse, their diabetes. For that program, I invited seven contestants into my house. I brought some of the best specialists in the business there, doctors, nutritionists, personal trainers, therapists and yoga instructors to help them change their lifestyles. The plot of the show was that they would be in my house for 35 days with no access to telephones, emails and snacks. The idea was to challenge and push them. Some would fail or give up. But some would make it and change their lifestyle to a healthy one, which is eventually what I did.

Author of The Budget-Friendly Fresh and Local Diabetes Cookbook