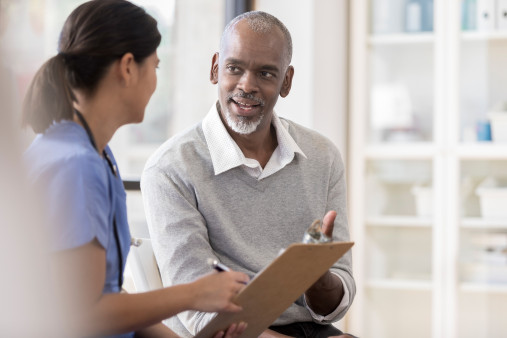 Black Men With Early-Stage Prostate Cancer Can Do Active Surveillance

Black men diagnosed with early-stage prostate cancer can practice active surveillance just like their white counterparts instead of heading straight into surgery or radiation, a new study has determined.

The finding, recently published in the Journal of Urology, comes from a large research collaboration known as the Canary Prostate Active Surveillance Study, or Canary PASS, led by Fred Hutchinson Cancer Research Center.

“There have been some conflicting reports as to whether it’s safe to use active surveillance in African-American men,” Lin said. “One report said they might have slightly higher rates of finding worse cancers during active surveillance, but that was a smaller study.

What is active surveillance?

Around a third of early-stage prostate cancers are slow-growing and thus are low risk. Radical treatments aren’t necessarily beneficial in these cases; instead, these men can be monitored through “active surveillance,” the standard of care recommended by national cancer organizations such as the American Society of Clinical Oncology.

“Active surveillance is for those who are able to recognize their tumor is not aggressive and might not even need to be treated,” said Lin, who also serves as the director of the Hutch and UW Medicine’s Institute for Prostate Cancer Research. “We follow them and do surveillance with PSAs and serial biopsies and other tests since prostate cancer can go from low risk to higher risk.”

Lin said that out of 100 patients who start active surveillance, 50 percent will go on to have treatment within the first 10 years.

“But half are still free of being treated,” he said. “The men in this study are hoping to avoid treatment because of side effects such as incontinence or leakage or erectile dysfunction.”

Treatment for prostate cancer usually involves a radical prostatectomy and/or radiation, and each treatment approach can come with considerable collateral damage.

“We know that for decades we overtreated men with low-grade prostate cancer,” Lin said. “We caused a lot of comorbidity — physical damage — and a lot of sexual dysfunction. More than half of men with prostate cancer will live with it and die with it. Not of it.”

Lin and fellow Canary PASS researchers — 11 study sites are involved in the collaboration — hope to curb overtreatment of the disease by better utilizing practices like active surveillance.

Participants in the Canary PASS cohort are early-stage prostate cancer patients who agree to undergo active surveillance in lieu of treatment for up to five years or until their cancer progresses. Participating sites have so far gathered demographic, lifestyle, quality-of-life and long-term outcome data on more than 2,100 men; the database also holds their germline DNA, blood, urine and prostate tissue.

The rich databank helps drive the creation of new tools and tests to better assess both the risk for and presence of aggressive prostate disease. It also helps researchers identify who can safely practice active surveillance and who cannot.

Researchers wanted to dispel the uncertainty about using active surveillance in African Americans, so Lin, Newcomb and others, including Pete Nelson, MD, who holds the Endowed Chair for Prostate Cancer Research at the Hutch, dug into the Canary PASS cohort to look at data from more than 1,300 men, 89 of whom self-identified as African American.

All the men had similar diagnoses and a family history of prostate cancer; all experienced the same number of follow-up biopsies and PSA tests.

After following the men for a median of 3.9 years and analyzing all of their data (neither genetic nor genomic sequencing was done), the researchers found race was not a factor in determining whether a man’s cancer would become more aggressive.

“Our findings contradict what some earlier studies have published,” Newcomb said. “In places where the follow-up is really good and adhered to, African Americans appear to do fine. One of the strong points of our cohort is we have a protocol and we have high adherence to that protocol — we have a bunch of loyal patients and a bunch of loyal coordinators and doctors.”

Newcomb said all the men in the Canary PASS cohort got PSAs and got them on time; they also got biopsies and got those on time.

“Active surveillance works as long as they’re active and being surveilled,” she said. “That’s a very important point.”

Lin added that even black men who decided to go ahead with a radical prostatectomy did not show signs of more aggressive disease.

“We looked at the pathology after their surgery by race,” Lin said. “Even in that small number of men, it did not show any difference. When we compared a subset who started out with active surveillance and went on to radical prostatectomy and compared black and white men, the rates of adverse or aggressive pathology were similar across the board.”

Both Newcomb and Lin acknowledged the length of follow-up in their study was modest — less than five years — and that the cohort included a relatively small number of African Americans, but they said it was still the largest study to date of black prostate cancer patients using active surveillance.

They also said the PASS cohort has grown since they initially collected data for this particular study.

“With our new funding from the National Cancer Institute, we now have 200 African Americans in our cohort,” Newcomb said.

The researchers hope the addition of more black men will make the Canary PASS cohort even more powerful than it already is.

“Health disparities in prostate cancer have been a problem for decades,” Lin said. “Many of the studies are just of whites. We’ve been targeting locations that have a higher representation of black men and hope to double the number of African Americans in our active surveillance study.” Lack of diversity in genetics research is a problem. Read more about it here.

Lin said it’s also crucial to continue to accrue participants because the science is ever evolving.

“They didn’t start using MRIs with prostate cancer until we were six or seven years into this study,” he said. “A new biomarker might be discovered this year. If we don’t have recent patients in the cohort, we become outdated. So we try to keep accruing a steady stream of new patients. We could easily get to 3,000 patients and the last 1,000 would be different patients as far as the way they were diagnosed and treated.

“There is no horizon because the field does change,” he said. “And we’re intent on still enrolling patients because we have many other avenues to study.”

This article was originally published on November 27, 2019, by Hutch News. It is republished with permission.