AIDS Memorial Quilt Heads to the South to “Change the Pattern”

The AIDS Memorial Quilt’s Change the Pattern HIV initiative will launch in Mississippi and focus on Black and brown communities.

Sections of the AIDS Memorial Quilt are about to tour the Southern United States as part of in an initiative to honor Black and brown lives lost to HIV and to raise awareness of racial disparities that continue to fuel the epidemic.

The Change the Pattern initiative will launch in Jackson, Mississippi, September 28 to October 4, with Quilt displays, educational forums, storytelling, advocacy, panel-making and other free programs. According to a press statement from the National AIDS Memorial in San Francisco, the custodian of the Quilt, the Change the Pattern display and events will then move to other Southern locations.

The multicity initiative is funded by a $2.4 million grant from Gilead Sciences, which manufactures many blockbuster HIV meds, in partnership with the National AIDS Memorial and the Southern AIDS Coalition.

The press statement adds that “as part of Change the Pattern, interested Southern-based organizations are invited to apply for funding to support local quilt-making workshops in their communities to ensure that the legacies of stories of Black and Brown lives lost are captured through newly sewn panels on the Quilt through the Memorial’s Call My Name program. The application process will open September 15, 2022, with up to 35 eligible organizations receiving up to $5,000 to support hosting local workshops.”

“The National AIDS Memorial is honored to partner with Southern AIDS Coalition and Gilead Sciences to bring the Quilt to the South as a touchstone to actively engage communities most impacted by HIV/AIDS,” said John Cunningham, CEO of the National AIDS Memorial, in the press statement. “By creating an empowering message and safe spaces for conversation, we can uplift, inspire, make progress toward ending the HIV epidemic, challenge cultural stigmas and continue the legacy of advocacy that the Quilt represents.”

The events in Jackson will include a display of more than 500 hand-stitched panels, many from the region. This will mark the largest display of the Quilt in the state. Each block of the Quilt measures 12 feet by 12 feet and is made up of eight 3-foot-by 6-foot panels. Roughly the size of a grave, each panel represents someone lost to the epidemic.

“Just as the Quilt was founded 35 years ago as a visual representation of the need to end stigma and provide equitable resources to communities most impacted by HIV and AIDS, Change the Pattern is a call to action and change in the South,” said Dafina Ward, executive director of the Southern AIDS Coalition. “Quilt-making has such a deep cultural connection in the Black community and in the South. We recognize that the disproportionate impact of HIV and AIDS on our communities is woven together by systemic injustices and historic wrongs that must be corrected. The sharing and telling of these powerful stories through the Quilt, coupled with advocacy and open dialogue, can help end HIV-related stigma and bring the stories of those we’ve lost to light.” 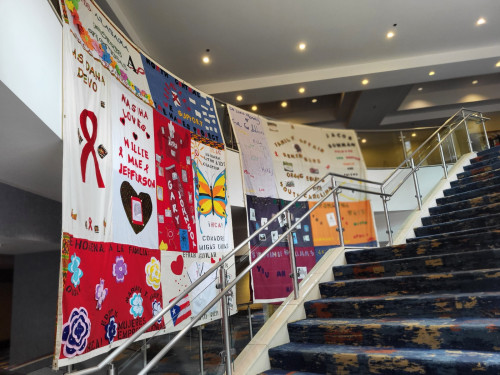 Nearly 100 panels of the AIDS Memorial Quilt were displayed during the Southern AIDS Coalition’s annual Saving Ourselves Symposium (SOS) in 2022.Courtesy of National AIDS Memorial

AIDSVu.org, which creates graphics and interactive maps based on HIV data, also offers a look at the disproportionate impact of HIV in the region, notably among African Americans and Latinos. “The South experiences a higher burden of HIV compared to other regions across the country, especially among communities of color,” AIDSVu states in Deeper Look: HIV in the South. “Black Americans in the South represented half of all new HIV diagnoses in the region in 2020, despite comprising only 19% of the Southern population. The South also only accounted for 21% of PrEP users in 2021.”

In related news, nearly 3,000 AIDS Memorial Quilt panels were recently displayed in San Francisco to mark the Quilt’s 35th anniversary and a return to its birthplace. Massive as it was, the display represented only 6% of the 50,000 panels that constitute the AIDS Memorial Quilt. Amazingly, an interactive display on AIDSMemorial.org allows you to explore, view and search all the panels in the collection.