Listen Up! Teens Need to Be Seen and Heard

Kali Villarosa, a 10th grader in one of New York City’s top public schools, shares her concern that HIV prevention messages aren’t getting through to young people. Her solution? Have teachers and policy makers dramatically readjust their approach and take young people’s perspectives into account.

Why aren’t safe-sex, HIV prevention messages getting through to adolescents? (Young people account for more than 30 percent of new HIV infections in the United States.) Is the failure caused by a generation gap? By young people’s sense of invincibility? By a lack of information and comprehensive sex ed? Perhaps the answer can be found among adolescents themselves. Talk to teens, and they can tell you how safe-sex messaging can be refocused. 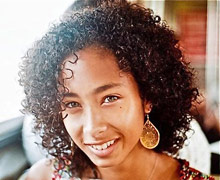 Just ask Kali Villarosa, a 10th grader from New York City. The 15-year-old, HIV-negative Villarosa is an unlikely HIV prevention activist. Her passionate commitment to the cause came after she attended the 2010 International AIDS Conference in Vienna. Villarosa felt a call to action after she befriended a group of young people living with HIV she met there. In fact, she began to write about the disconnect between adults’ and teens’ perceptions of the virus after she returned to the United States and sat through a school health class. “My generation takes HIV for granted,” she wrote in an essay for 30 Years is Enuf!, a Black AIDS Institute (BAI) report.

Villarosa notes many of her peers don’t protect themselves against HIV because they don’t see the virus as a threat. Their attitude, she says, is that HIV is “an old problem,” a relic of the past now that antiretroviral meds have prolonged many people’s lives. Real Health spoke with Villarosa about her HIV activism and her insight into adolescents’ views about the virus.

How did you first become involved with the Black AIDS Institute and youth-driven HIV prevention activism?

When my mom took me to the [2010] International AIDS Conference in Vienna, I was excited because I was going for the first time. When I got there, my mom was working with the Black AIDS Institute. Since they didn’t have anyone as young as I was [to represent them], I decided to go into the youth center. That’s where I got to meet a lot of HIV-positive people and hear their stories. It was really wonderful. Then the Black AIDS Institute asked me to write about what I’d felt and experienced.

What were the main things you took away from the International AIDS Conference?

I’m surrounded by people my own age, but I don’t have any friends who are HIV positive. When I went to this conference, I was surrounded by HIV-positive people, so it was a whole new thing for me. Hearing their stories was inspirational. I learned that many people [living with the virus] are not accepted, especially in the United States. I was talking with one boy there, and he told me how his community didn’t accept him because he’s HIV positive. This was the first time I’d heard something like this, and it really surprised me. Also, just seeing all the medications [that many HIV-positive people] have to take [also surprised me].

When you were back at school, did you also have a new awareness of what your peers didn’t know about HIV?

When I got back to school and [observed students in my] health class, I realized that people were unaware about [HIV/AIDS]. People my own age were barely aware that HIV existed. Or they knew it existed, but they just thought not many people have it anymore.

Why do you think people your age have taken that attitude?

To young people, HIV has become more of an invisible issue. We might meet a lot of people who have the virus, but it’s less talked about than it used to be among my generation. People don’t really know what it’s like to live with HIV. So, yes, I want to get out the fact that we’ve come far and we’re always improving medications and ways to prevent HIV. But at the same time [I want people to know] the virus hasn’t disappeared completely, so we have to be aware of that.

In the Black AIDS Institute essay, you wrote that your peers didn’t seem to take information about HIV or safe sex to heart. Can you explain that more?

My health teacher [the last school year] was a wonderful man, but I felt like he taught primarily from a book. He used a health textbook that teachers are assigned to use. He took the words from a book and wrote them on the board for us to copy. That made the issue much less important to my peers and probably to me as well. It didn’t feel like he was trying to connect with us. Of course, there were some kids who took it in, but I felt that for a majority of kids it was like words being blown into the air. The only way kids would write [the information] down was if it was going to be on a test. [And that meant] people were more focused on what their grade was going to be.

Do you think part of the reason your health teacher read from a book is because adults have a very awkward time discussing sex with young people?

I think that’s a big problem, and a lot of the time that’s why teachers just read from a book. Or they just tell you basic HIV statistics. They don’t really want to confront the issue.

What do you think would be a better approach?

If you want to get information across to my generation, you have to get people who are suffering from the illness and bring them in to talk. Show [kids] the medications that people have to take because of the illness. Show more of the consequences of HIV and films of what it was like at the height of the epidemic. This way, the younger generation would be much more interested in the topic because they can get that it actually relates to them. [They’d understand] that they can easily get the disease if they’re not careful. Also, I feel more young people living with HIV should come forward and share their experiences as well.

In general, do you think young people are applying the safe-sex practices they learn in health class?

Some of them are. But at the same time we have shows such as [the MTV series] 16 and Pregnant that are very popular. It shows the lives of these 16-year-olds who didn’t have safe sex. Some of the shows don’t [represent] young people having safe sex at all. That’s why I feel like some of the people from our generation are getting it in their minds that we don’t have to worry about [consequences]. [Many teens think] that the girls on this show, their lives don’t seem that bad. They seem happy.

Seems you’re saying the media works against safe-sex messaging. How do you think the media can change to help adolescents better negotiate safe sex?

Programmers should include [a disclaimer saying]: This is not the choice that you should be following, or make it seem a little harder for these girls. I’m sure the show’s creators make these girls a little happier than they actually are. The media just needs to show there are consequences of having unsafe sex. After watching these shows, kids should think, “You should definitely have safe sex.” And there should be more commercials, or posters around the city or on TV telling stories about people with HIV and showing how you can prevent the disease. Also, there should be a lot more [said] about how getting tested is good and that you shouldn’t be afraid to get tested because you could be saving yourself and other people.

What about HIV stigma? Is that something you’ve confronted?

Yes. I’ve tried to confront it. It’s OK if you have HIV. [I think] you should want to talk about it so that people are more aware of the virus and people can prevent transmission easier. There’s nothing wrong with having HIV. There are many people who have different diseases, so we should not treat HIV any differently than any other [illness].

Young people account for over 30 percent of new HIV infections. Do you think that’s the fault of young people who engaged in risky sexual behavior or the fault of sex ed programs that aren’t getting the information to students?

I think it has to do with a bit of both. If teachers aren’t teaching about HIV creatively or not putting much care into the subject, then the students are not going to be likely to listen. But at the same time, there are those students who don’t really want to give it a chance and don’t really care because they feel like it doesn’t relate to them.

What do you think are the main points that young people need to know in order to protect themselves against HIV and other sexually transmitted infections?

They definitely need to know how HIV is spread. I’m saying blood-to-blood contact, breast milk, [and through sexual fluids like semen and] vaginal secretions. Also, they need to know you can easily protect yourself by using a condom. In addition, I think they need to know basic [HIV] statistics. And they should know the different medications people must take once they contract the disease, or how much medication you’re required to take each day. This is a way to show kids they really don’t want to get this disease and should want to prevent the virus spreading as much as possible.