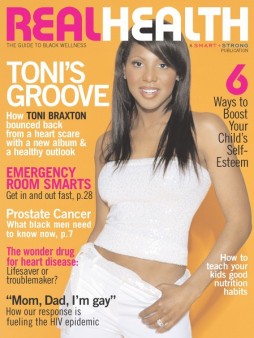 It seems she’s been gone a minute. But from industry woes and a heart-health scare, Toni Braxton has bounced back with a new album and a dedication to healthy living.

Who hasn’t macked to Toni Braxton’s aching contralto? Swooned as it scaled the heights—and plumbed the sorry lows—of romantic obsession in “Seven Whole Days”? Who hasn’t stopped waiting to exhale to “Breathe Again”? Or made a party-down fool of themselves to Frankie Knuckles’ remix of “Unbreak My Heart”? l If you’re raising your hand, you need to check for a pulse. Because surely you’ve heard that voice. Since her smash 1993 debut, Toni Braxton, the slim, gamine-faced singer from Severn, Maryland, has been as ubiquitous as oxygen.

But the music landscape is littered with icons who crash to earth in a blaze of rehab, 5 a.m. mug shots and mortifying home videos. Braxton’s dramas have been different, but no less over-the-top. “The business has scared me often. I can’t deny that,” she says, perched in a high director’s chair and swathed in a slate-blue satin robe. She’s in a massive, sun-flooded photo studio in New York City’s West Village, overlooking the Hudson River, shooting the cover of her latest album, Libra. “But I love singing. I can’t imagine doing anything else.”

Another Sad Love Song
Her hit parade with producers Babyface, Antonio “L.A.” Reid and LaFace Records was massive—26 million records sold and counting, not to mention multiple Grammys and number-one hits. But there was no cha-ching at the end of Braxton’s rainbow—not without a 1998 bankruptcy, followed by a lawsuit against the label. By 1999, she finally won a settlement—and freedom from a record deal that, as she describes it, made her one of the world’s most recognizable volunteers. “After promoting the second album [1996’s Secrets, which has sold 12 million copies], my earnings statement was less than two thousand dollars,” Braxton says. “So you heard, ‘Well, she spent up all her money, and it all of a sudden disappeared.’ That’s not what happened.”

Yet Braxton made some choices that had even loyalists shaking their heads. Her peek-a-boob photo shoot for Vibe in 1997 prompted letter writers to accuse her of demeaning black women. The dress she was falling out of at the 2001 Grammys (the one with the shoulder-to-ankle cutouts) didn’t help. Nor did her string of tabloid dalliances with pro athletes Curtis Martin, Jason Kidd and Jim Jackson. Then there was her rep for full-on diva ’tude. “Sometimes you need a swift kick on the butt, but sometimes you need a pat on the head, and that’s where family and friends come in,” she says. “Because sometimes you think you’re great, and your family’s like, ‘No. That’s not great. That was wrong.’ You need that support around, to keep you grounded.”

Like too many of her predecessors and peers, Braxton could have become just another Behind the Music casualty. Instead, she dug in her four-inch heels and hung on, keeping herself visible in Broadway’s Beauty and the Beast and Aida. In 2001, Braxton happily married musician Keri Lewis (an alumnus of the boy band Mint Condition), and together they’ve had two sons, Denim, 3, and Diezel, 2. And Libra, her latest album (and her first with Universal), rocks collaborations with powerhouse producers like Scott Storch.

Breathe Again
Among these life-altering events, perhaps the least expected was a heart-health scare that took Braxton out of a 2003 Broadway performance of Aida and landed her in the emergency room. “I had really severe chest pains,” she says. “I said, ‘This is the last scene before intermission. I can finish the scene real quick.’” But after an EKG at the hospital, she got the diagnosis: pericarditis, an inflammation of the lining of the heart. “I felt scared, petrified at first, because I’d never heard of it. I was very fortunate. Sometimes when you get pericarditis, you have a lot of fluid around your heart. I had a little fluid, and they didn’t have to do surgery to extract it.”

Instead, she was put on a regimen of anti-inflammatories and steroids and recovered. “Pericarditis is not preventable,” says Jennifer H. Mieres, MD, a cardiologist at Northshore University and spokesperson for the American Heart Association. “It is seen in some patients after a viral infection. But it’s treatable, so if you’re having chest pain or shortness of breath, see a doctor right way.”

Finding herself with heart disease in her 30s, at a sylphlike 110 pounds, was a wake-up call. “Being lean doesn’t necessarily mean you’re not at risk,” she says. In Braxton’s case, genes probably play a part. Both her parents have high blood pressure. Her mother, Evelyn Braxton, a singer and choir director, has diabetes and her father, Rev. Michael C. Braxton, has high cholesterol and a family history of heart disease. “So I’m thrown on both sides.”

Braxton made some lifestyle changes, cutting down her intake of pizza and burgers in favor of vegetables like asparagus as well as fresh fruit, “to get that extra fiber.” She does cardio at least three times a week on the treadmill or elliptical machine. She still has vulnerable moments. “I could be on stage singing, and a heart flutter happens,” she says. “It’s not life-threatening. It just makes you nervous, makes you scared.”

Her experience prompted her to join forces with the American Heart Association, speaking in public-service announcements targeting women and African Americans. “Women, we ignore the signs and say, ‘Oh, I’m just tired,’ because that’s what I thought,” Braxton says. “Your body gives you warning signs, like severe chest pains along your bra line. You think, ‘Oh, it’s tummy bubbles, I’ll take some antacids and I’ll be OK.’ But it’s important to get it checked out.”

And she urges African Americans not to let fears or mistrust of health care speed them to the afterworld—and to see a doctor if they have symptoms. “It’s better than waiting until the last minute. On your tombstone, ‘Here lies Mr. or Mrs. So-and-So. They died because they weren’t no punk and didn’t go to the doctor. That’s crazy.”

More Than a Woman
For now, the songstress is enjoying marriage and motherhood, raising Denim and Diezel to be responsible young men (Diezel gets a dollar a week for bringing the newspaper in). “Being a mommy, I come last,” she says. “I’m a Libra. I’m just really trying to find balance, find my way through.”

With that, Braxton steps into an elevator and heads to the West Side Highway where a 1930s, cream-colored Rolls Royce—a prop for the last leg of the shoot—awaits her. It’s not the kind of ride you’d see 50 Cent rolling up in. But it’s elegant and timeless, like a good Braxton joint. And while it’s a record 96 degrees outside, Ms. Braxton—in a sheer, chocolate-colored blouse, Capri pants and some lethal heels—looks like she can take the heat.