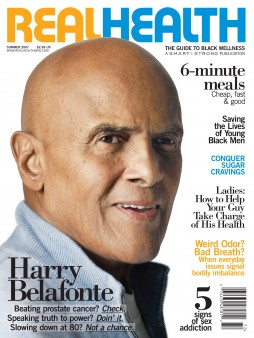 Harry Belafonte, actor, activist and humanitarian, stared down prostate cancer and won. It seems there’s nothing he can’t overcome.

To say that 80-year-old entertainer-turned activist Harry Belafonte Jr. has led a full life would be an understatement.

Born in Harlem, the actor and singer, who has both a Tony and a Grammy on his shelf—he was also the first brother to win an Emmy—was one of the nation’s first black sex symbols. But he is one of America’s most notable humanitarians as well. A World War II vet, UNICEF Goodwill Ambassador and outspoken critic of the Bush administration, Belafonte hasn’t met a professional challenge he couldn’t conquer throughout his nearly 60-year career.

So when Belafonte, husband of wife Julie, father of four and grandfather of four, was diagnosed with prostate cancer in 1996, he felt sorry for himself for about 30 seconds before he rolled up his sleeves and got to work.
Difficult Choices
“All the questions come flying at you,” says Belafonte. “First you’re overwhelmed. Then you ask, ‘Why? Where did it come from?’ Then the fear sets in. But then you know you’ve got to investigate your options and [start managing your illness.] And very, very quickly you get on with the business of a cure.”

Consulting with other black men who had survived the illness or were going through treatment, Belafonte weighed his choices very carefully.

“I put together a list,” he explains in evaluating the disease, the leading cancer diagnosis for men in the United States. Black men die from prostate cancer at double the rate of men of other groups. “I [looked at] radiation. The implantation of pellets was a possibility. Hormonal therapy to shrink the prostate—all those things were considered. Then I looked at recovery percentages. I asked, ‘What’s the survival rate? Which treatment is the most manageable?’”

Belafonte knows he was fortunate—he had a wealth of options at his disposal because he had caught the disease early on.

“I’ve always been attentive to my health,” says Belafonte. “Twice a year I go for check-ups. Eleven years ago one of my check-ups [revealed] some disturbances in my PSA, so the doctors [took a closer look]. That is when the tumors were revealed. So it was spotted very, very early. And that gave me [more] choices for what could be done.”

No Excuses
Today, after undergoing surgery, Belafonte is cancer free. But many black men—part of the racial group most likely to die from the disease— aren’t as lucky. That is, if you believe in luck.

The son of a poor emigrant woman from Jamaica, where he lived for part of his childhood, Belafonte says it was his mom’s early teaching to avoid junk food and smoking and to work out regularly that put him on the right path to good health. He says black people must exercise and eat right, regardless of their financial backgrounds.

“Even people trapped in poverty have choices,” he says of our fast food nation. “The myth that [life choices] can be smothered out because poverty exists—I think that needs to be dealt with.”

And Belafonte isn’t using the fact that he’s 80 as an excuse to slack off. He still avoids junk food and follows a well-rounded exercise regimen of running, weight training and swimming. In fact, he’s looking forward to adding meditation and yoga to the mix this year. After all, he has his eyes set on 90.

“It’s highly unlikely that I will die from prostate cancer,” says Belafonte. “I might die from a host of other things, or even other forms of cancer. But prostate cancer is not a player any longer. You move ahead with managing life and looking at how soon it can [all] be taken away from you. You look at mortality a little differently and get on with living.”

Tomika Anderson is a regular Real Health contributor.
FROM THE RECORDING STUDIO TO THE BIG SCREEN TO THE WORLD STAGE, BELAFONTE SHINES

1954
That’s Love Belafonte sizzles on screen with Dorothy Dandridge in Carmen Jones.
1956
Daylight Come Calypso is the first album in history to sell more than a million copies.

1963
Human Rights Watch Addressing the crowd at the March on Washington, which he helped organize with Martin Luther King Jr.

ON THE HORIZON
As the medical community learns more, the technology that helps to detect and treat prostate cancer advances. Look for these technologies to emerge in the near future:

Better Detection
California researchers have developed a urine test that may be more accurate than the standard PSA-screening blood test. The test, called PCA3, detects genetic material that is specific to prostate cancer, whereas the PSA test can’t differentiate between actual prostate cancer and other conditions, such as an enlarged prostate. Some labs are now performing the urine test, so your doctor may do it if you ask. However, it is not yet approved by the FDA.

State-of-the-art Surgery
The new laproscopic radical prostatectomy (LRP) surgery can be less invasive and reduce the risks for side effects, such as incontinence or impotence, that can accompany traditional prostate surgery. LRP is performed using a camera and micro surgical instruments inserted in the body through tiny incisions. Other benefits? Shorter hospital stays and recuperation time. It’s currently available at the most elite medical centers; ask your surgeon if LRP is an option for you. —Andrea King Collier