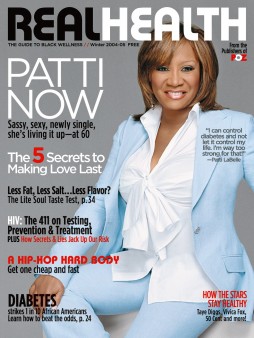 Twelve years ago, Patti LaBelle was diagnosed with diabetes--but that hasn’t stopped the funky diva from living it up.

Patti LaBelle is that unheard-of phenomenon—a singer whose career has stayed smokin’ ho tfor four decades and counting. With girl group the Blue Belles, she scored her first hit in 1962. More than a decade later, as frontwoman for psychedelic funk trio LaBelle, the Philly-born chanteuse torched the airwaves with “Lady Marmalade.” Solo chart toppers, like “If Only You Knew,” “New Attitude” and “On My Own,” buoyed her career into the’80s and ’90s, and in the past two years, hip-hop heads like DMX, Nelly and Missy have vied to record with her. “Patti isn’t manufactured,” says Jehryl Busby, head of Def Soul Classics. “She understands that when you walk out onstage and someone has paid to see you, you owe them sweat and tears, and she gives that every time. That’s why young artists relate to her. She’s so real, and she passes on such knowledge.”

But 12 years ago, at a performance in Albany, New York, the goddess proved human. “I got really dizzy and fell, so they rushed me to the hospital,” she says. The diagnosis: Type 2 diabetes. “I was petrified.After seeing my mother suffer and have both legs amputated by the time she was 58, I thought the same was going to happen to me,” says the singer, whose family has a legacy of troubled health: One uncle lost his sight to diabetes, and all three of her sisters succumbed to cancer by their early forties.

LaBelle fought back by going on treatments for lowering her blood sugar and making some serious lifestyle changes. “I started exercising for the first time, and I began cooking properly,” says the self-avowed fried-chicken fiend. “I now sauté chicken or put it in the oven. Black people need to know that they don’t have to sacrifice taste for good health.”

Now she’s dedicated to jump-starting the dialogue about diabetes in the black community. “We don’t go see the doctor because we’re afraid of what we may find out,” she says. “That must change.” A spokeswoman for the diabetes nutrition company Glucerna, LaBelle is also a bestselling author of cookbooks like the diabetes-friendly Patti LaBelle’s Lite Cuisine, featuring recipes from fellow diabetics Luther Vandross and Halle Berry.

She shows no sign of slowing down, saying fans “can see Patti LaBelle still go onstage in her five-inch pumps—diabetic, menopausal and everything else—and still do my freaking show!” She released her latest album, Timeless Journey, with Def Soul Classics this year; she’s hosting Living It Up With Patti LaBelle on the TV One network, and she has introduced a line of clothing and jewelry. A reunion with LaBelle sisters Nona Hendryx and Sarah Dash is in the works, and—recently divorced after 32 years of marriage—LaBelleis looking for “a decent-looking man. I’m not trying to date the Thriller!” But she’s not complaining. “My life is so full right now. I don’t plan on going anywhere anytime soon.”