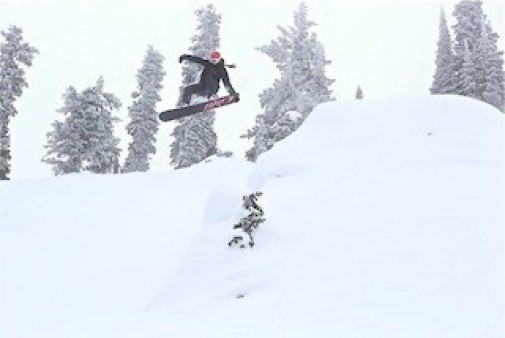 When Megan Pischke learned she had stage 3 locally advanced breast cancer, the shock soon turned to devastation. Pischke was confused. She was a professional snowboarder and X Games veteran. She followed a healthy lifestyle and couldn’t quite comprehend how she’d acquired this devastating illness. “I eat healthy; I don’t smoke; I don’t drink and I’m an athlete,” Pischke says. “I thought I was really in tune with my body.”

Pischke’s diagnosis confirmed her fears. But once she moved beyond the devastation and the fear she thought about all the women, girls and other young people she’d met at Boarding for Breast Cancer (B4BC) who’d survived cancer. Pischke would organize retreats for breast cancer survivors to share their experiences as part of her involvement with this breast cancer education and prevention foundation. “I was just really inspired by this,” she says. “So I thought I just had to make some plans. I’ve got two children, so I thought of them and my family.”

Pischke’s cancer-fighting strategizing began with a mental statement of her mission. “I decided that I was going to survive this and not have a reoccurrence,” she says. “But I wanted to make sure that I was going to do everything that I could mentally, physically and spiritually to get me to that point.”

Part of Pischke’s plan included following a holistic and traditional chemotherapy approach to treatment after she underwent surgery. One of the things that was very important to her was to hold onto her hair. “I thought that by keeping my hair, I’d be able to keep my illness private,” she says. “I wanted to live my life without having to share that story at that time with everybody. That just felt better to me.”

The method Pischke used to circumvent hair loss during her chemo treatments is called cold cap therapy. She’d heard about it and wanted to see if the treatment might work for her. Cold cap therapy is also called scalp cooling. Essentially, the process entails the use of a special cap, or set of caps, cooled to very frigid temperatures, using dry ice or a biomedical freezer. The freezing temperatures constrict the blood vessels that lead to the hair follicles and in so doing reduces the amount of chemotherapy drugs that reach the follicles while the cancer patient wears the cap. This helps to stop hair loss.

Cancer patients in Europe have used cold cap therapy for almost 20 years. But in the United States people living with cancer have only learned about and used the treatment during the past few years according to the Rapunzel Project, a non-profit organization that helps chemotherapy patients keep their hair during treatment.


“I felt really empowered actually by the process of trying to keep my hair,” Pischke says. “My husband and I went into it with an open mind, not knowing if it was going to work or not, so we just tried it.”

But after 16 chemo treatments, Pischke says, “I still had my hair, so I was halfway through the process when I realized that I wasn’t going to lose all my hair.”

Pischke’s goal was to look as normal as possible during her chemotherapy treatments. “There were some days that I could wake up and look in the mirror and feel okay,” she reveals. “I would be kind of able to escape from the intensity of what was really going on in my life by looking and feeling normal, and my kids could see me as normal.”

Although she did lose her eyebrows and eyelashes during treatment, Pischke simply put on her reading glasses when she had to travel about. This way she didn’t have to share that she was undergoing cancer treatments with “people at that time.” This was a way she used to hold onto a bit of normalcy in her life during this stressful time.

Pischke also allowed a friend who worked for a production company to film her while she did the cold cap therapy and teamed up with B4BC to capture her journey in a documentary format so that other women in breast cancer treatment could learn from her experience. “I decided that sharing my story could, hopefully, inspire and teach others what I was learning,” she says. “I wanted to share that with people.”

The film is titled Chasing Sunshine and is scheduled to make its U.S. debut in January 2015 during X Games, in Aspen.

Besides documenting Pischke’s cold cap therapy treatment, the film also explores her decision to use a mix of holistic care and traditional chemotherapy to treat her cancer. Pischke’s integrative approach to cancer care included Chinese and naturopathic medicines. She also maintained her whole foods, plant-based diet and added drinking bone broth, even though she’s not a meat eater.

“I actually got organic soup bones and I cooked them in my crock pot,” she explains. “At that time, it was a really horrible smell, but then I discovered that I could throw in ginger, carrots and onions to get rid of the flavor.”

Pischke held her nose while sipping the broth and thought about how the concoction would nourish her system . “I drank it because I knew it contained vitamins and it supplemented my bone marrow and helped my blood, so I had to get over the fact that it was gross,” she says.

In addition, she maintained a regimen physical activity that included paddle boarding, running, walking and doing yoga. She also prayed and meditated, and even visited a shaman before she moved her alternative treatment plan into motion. “I discovered in that work I did with myself that I had to believe that I was going to make it through this, and this was part of my process,” she explains.

Support from family and friends also helped Pischke immeasurably. “There was a part of me that actually wanted to do this alone,” she admits. “But there was a lot of that personal conversation with myself happening where I realized that this wasn’t just about me. This was also about my family and friends wanting to help.”

Pischke sees herself as a giver who usually does a lot for other people. But she learned a life lesson that took her to the opposite extreme of that characteristic.

Says Pischke, “I think this process really taught me that when things get hard it’s okay to let people in because they want to help. I also had to learn that it’s about receiving. That’s what the world is about; it goes both ways.”