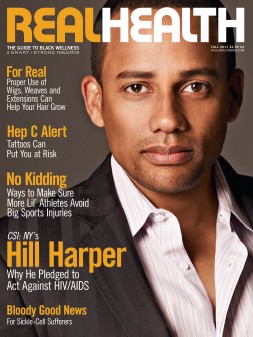 Part of the Solution

That’s what CSI: NY regular Hill Harper became when he committed himself to work as an HIV activist.

When Hill Harper played the role of a prisoner dying of AIDS in the 2000 independent film The Visit, he’d already seen the pain and suffering of people living with the virus in real life. At the time, he was in Harvard graduate school working on legal aid projects and meeting a lot of frightened folks being evicted from their homes because of their HIV status.

“Back then there was a lot less information and a lot of stigma around HIV/AIDS, and that still continues to be the case,” Harper says. “But I think [back then] the stigma was much worse with folks getting evicted from their homes and being discriminated against; there was a lot of misunderstanding [about the virus].”

Then, as now, this misunderstanding helped drive the epidemic. Almost 1 million people were living with HIV/AIDS in the United States in 2000 (today, that number has climbed to nearly 1.2 million). The growing epidemic alarmed Harper. Early in his career, he and a cousin collaborated on writing a short film, One Red Rose, about this virus that was killing African-American women in droves. “We wanted to talk about this issue that seemed to be very much ignored,” Harper says.

When he played the main character in The Visit, Harper got his chance. This role was based on a real man who died of AIDS in prison. While doing research for the movie, Harper interviewed a number of HIV-positive prisoners and eventually met Phill Wilson, the founder and CEO of the Black AIDS Institute. Wilson asked Harper to get more involved with the institute, and the actor took up the challenge.

Four years later, Harper once again landed the role of an HIV-positive man, this time on the hit Showtime drama Soul Food, as the brother of a series regular. Harper’s character announces his HIV status during a family visit. In the episode, he is fearful of death and concerned about all the women he may have infected. 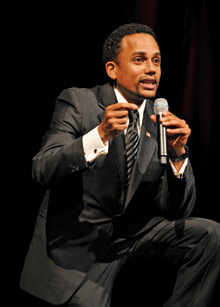 “My goal has always been to use art to entertain and educate at the same time,” Harper says. “I think entertainers have done a great deal to educate people about HIV/AIDS.”

While preparing for these roles, Harper continued to educate himself about the virus, and that cemented his commitment to enlighten others—young people in particular, a group increasingly targeted by climbing HIV infection rates.

To address the issue, in 2006, Harper published a book for young black men titled Letters to a Young Brother. Two years later, he followed with Letters to a Young Sister. Both books encouraged these at-risk groups to talk about how the virus affects sexual relationships and how they can take responsibility for protecting each other’s health.

In both of his books, Harper also focused on the importance of building black teens’ self-esteem. When young people don’t value themselves, he says, they’re more susceptible to HIV. “Unless you convince young people that they’re valuable, magnificent and worthy of a future,” Harper explains, “then talking to them about present-day choices that affect their future lives really falls on deaf ears.”

Harper’s commitment to HIV awareness and advocacy also extends to partnering with others in the artistic community who want to make a difference. Recently, he endorsed a play by actor Daniel Beaty that focused on black health and wellness in general and featured an HIV/AIDS subplot. Harper spread the word about Beaty’s play, Through the Night, via tweets on Twitter and agreed to have his name listed as a supporter.

“I believe all artists should find ways to support each other, and Daniel’s challenging theater piece was just an incredible work,” Harper says. “It’s very difficult for [independent, off-Broadway] shows like his to compete with the big Broadway shows to get people’s attention. I think that [support] is very important, especially when we’re attempting to do work that elevates the human consciousness and spirit.”

Harper’s efforts to raise HIV awareness echo a slew of recent health education campaigns developed by the U.S. Centers for Disease Control and Prevention (CDC). As part of a five-year strategy to “Act Against AIDS” (also the name of the campaign), the multifaceted initiative targets various population groups in the African-American community. The campaign is designed to fight complacency and apathy about the HIV/AIDS crisis in the United States, to refocus national attention on the domestic epidemic and to reduce HIV incidence throughout the country.

Like the CDC, Harper is serious about provoking people, especially youth, to think about how sexual relations can have long-term health  consequences on both themselves and the community. In an interview with the Black AIDS Institute, Harper says, “My priorities lie with young people, particularly young African Americans. Since HIV/AIDS is affecting that group dramatically, it’s important for me to do this work.”

The CDC estimates that 25,000 African Americans contract HIV each year and that 38 percent of them are ages 13 to 29. For Harper, this statistic raises tough questions.

Of course, as an outspoken advocate, Harper isn’t afraid to offer his provocative and candid opinions of the community’s apathy and unwillingness to confront the issue of HIV and the possible consequences that go with being in denial. “To me, unless we encourage everyone to ask those questions, we’re going to have a tough time solving these issues,” he observes. “Why? Because there’s a whole group out there who doesn’t think there’s a problem and a whole other group who doesn’t care there’s a problem.”

Still, Harper remains optimistic about people’s ability to change. “I’m very hopeful because we’ve seen progress,” he says. “Yes, it’s been too slow in our community, so what can we do to change that? I believe part of it is getting people to talk about HIV and not ignore it and act like it’s someone else’s problem. HIV is everyone’s problem, and we have to take it extremely seriously and learn [more about the virus].”

Harper believes one of the major forces fueling soaring HIV infection rates is people’s seeming lack of concern for each other. He tackled this topic in The Conversation, his third book, published in 2009.

In The Conversation, Harper chronicles a series of chats with friends and strangers that show the wide divide that sometimes separates African-American men and women. “It’s not clear to me that black men and women are taking care of each other, and certainly when you extend that idea to [include] sexually transmitted diseases and HIV/AIDS that’s a huge problem,” Harper says. “We have to love each other and want to take care of and protect each other, and we’re not doing that in other areas, so obviously we’re not doing it as concerns HIV/AIDS.”

According to Harper, the most disheartening aspect of writing The Conversation was hearing the two genders’ thoughts about each other. He says those opinions made him question whether black men and women are even friends anymore. “That’s the most dangerous aspect of all,” he says, “because at least when you’re friends, you love someone and you care about them, and [that makes] you want to include them in your circle of care.”

Besides the concern he voices to people everywhere, Harper is quick to make room in the circle. His reason for encouraging people to invite others into their circle of care is simple but telling: “If we don’t include each other in our circle of care, then we are in big trouble.”
Where Do You Stand?
Whether HIV positive or negative, it’s important to know your status.

In 2009, to fight apathy about the U.S. HIV crisis, the Centers for Disease Control and Prevention (CDC) launched a five-year public education campaign called “Act Against AIDS.” This fall, the CDC will roll out the initiative’s latest phase. The goal? To increase HIV testing among black gay and bisexual men—one of the groups hardest hit by the epidemic.

Today, black gay and bisexual men account for more than 40 percent of all new HIV infections among African Americans. The reasons these men are at greater risk of the virus can be attributed to a variety of factors. According to CDC research, those reasons include a higher prevalence of HIV and other sexually transmitted infections (STIs), homophobia, discrimination and men’s unawareness of their HIV status.

What sounded the alarm is a recent CDC study that showed nearly 60 percent of HIV-positive black gay and bisexual men didn’t know they had the virus. This is key because the majority of new sexually transmitted HIV infections are spread by people who are unaware they’re positive.

To address the problem, the CDC launched a series of online, transit and billboard ads in U.S. cities to encourage men to get tested. The reason for the communications blitz is because experts believe HIV testing is critical to help men know their status, get the care and treatment they need, protect their partners from infection, and help bring an end to this epidemic.

To measure the campaign’s success, the CDC has been checking for discernible attitude and behavioral changes, awareness and testing upticks among the targeted population groups. So far, the results look good. The CDC’s 2010 evaluations showed that audiences responded to the campaigns with visits to key CDC HIV education and testing websites.

But remember: It’s still up to you to get tested. Do you know your HIV status?